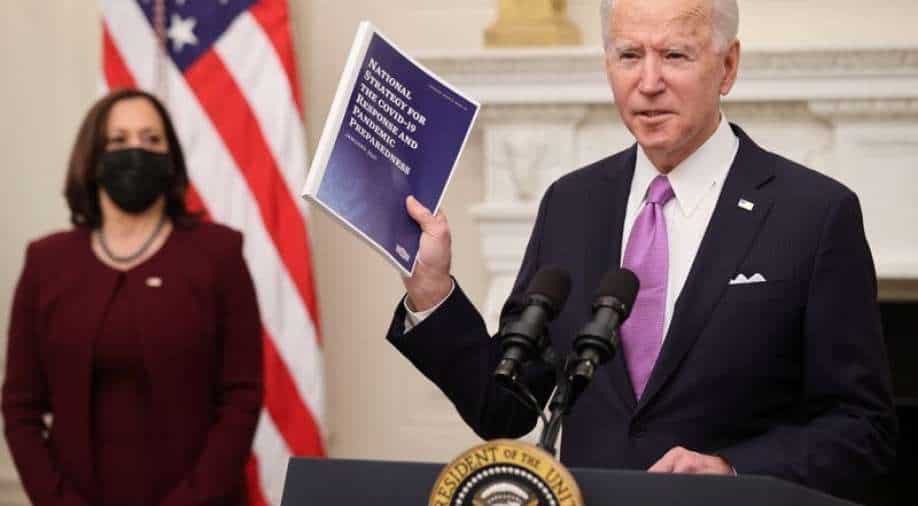 Biden, who took office on Wednesday, campaigned on a promise to aggressively take on the pandemic, which his predecessor President Donald Trump often downplayed and provided conflicting information about

The Biden administration is set to press Democratic and Republican senators for a fresh $1.9 trillion in coronavirus relief to avert a larger economic crisis.

Brian Deese, director of the National Economic Council, said he would speak to the senators to make the case for a large rescue plan.

"We can't wait," White House spokesperson Karine Jean-Pierre told reporters on Sunday. "Just because Washington has been gridlocked before doesn't mean it needs to continue to be gridlocked."

Biden, who took office on Wednesday, campaigned on a promise to aggressively take on the pandemic, which his predecessor President Donald Trump often downplayed and provided conflicting information about. "The bottom line is this: We're in a national emergency, and we need to act like we're in a national emergency," he said on Friday before signing executive orders on economic relief.

The COVID-19 pandemic has killed more than 417,000 Americans, thrown millions out of work and is infecting more than 175,000 Americans per day, posing an immediate crisis to the Biden administration.

While Congress has already authorised $4 trillion to respond, the White House argues that another $1.9 trillion is needed to cover the costs of responding to the virus, as well as providing enhanced jobless benefits and payments to households.

The legislation will likely need bipartisan support to clear procedural hurdles and emerge from the Senate. A number of Republicans have already balked at the price tag.

Trump's tenure drew to a close with his second impeachment by the House of Representatives after supporters stormed the US Capitol on January 6 in a failed attempt to overturn his election loss. Five people died in the violence.

Biden has said one of his top priorities would be unifying a bitterly divided country.