Biden eyes next stage of Covid-19 fight, slams attacks on Asian-Americans during pandemic 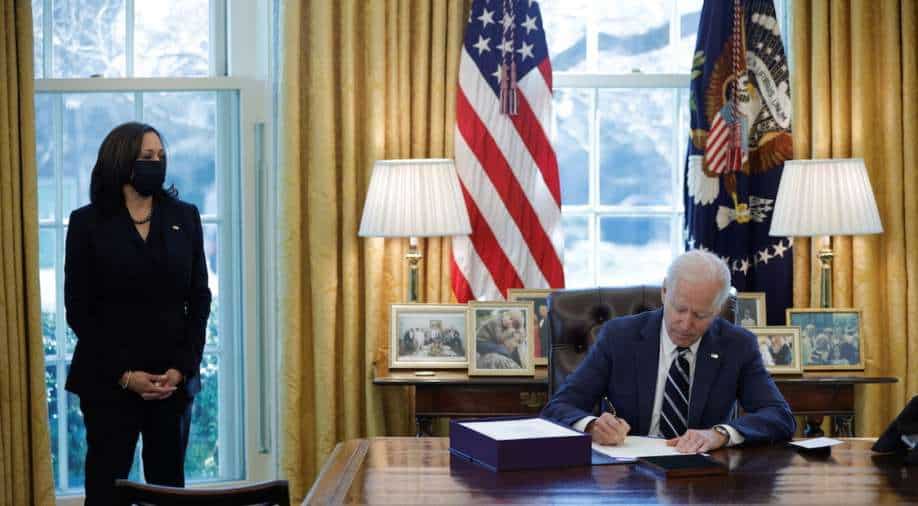 Biden's televised address on Thursday came hours after signing his $1.9 trillion stimulus bill into law -- his first major win in office some 50 days into his administration.

US President Joe Biden has said his administration is taking aggressive action to speed Covid vaccinations and move the country closer to normality by July 4. He added he would direct states to make all adults eligible for the coronavirus vaccine by May 1.

His televised address on Thursday came hours after signing his $1.9 trillion stimulus bill into law -- his first major win in office some 50 days into his administration.

Biden signed the measure, designed to bring relief to Americans and boost the economy, with Vice-President Kamala Harris at his side in the Oval Office.

Biden warned Americans not to relent in the fight to defeat Covid-19, saying it was "far from over," while offering hope for brighter days to come as virus cases wane and vaccinations accelerate.

"This fight is far from over," Biden said in his first primetime address to the nation. "This is not the time to let up."

He urged Americans to get vaccinated and to continue to follow social distancing rules and wear face masks, adding that ultimately, "history will record that we faced and overcame one of the toughest and darkest periods in this nation's history."

Biden, who campaigned on a promise to curb the pandemic more effectively than his Republican predecessor, Donald Trump, has told Americans since his January inauguration that more deaths and pain were coming from COVID-19.

As the vaccinated population slowly increases, Biden is conveying fresh hope even as he urges people to remain cautious to prevent further flare-ups.
Biden said on Wednesday he would use his address to discuss "what we`ve been through as a nation this past year" and lay out the next phase of the government`s COVID-19 response.

Biden's signing of the legislation, which passed without a single Republican vote, had initially been scheduled for Friday, but White House chief of staff Ron Klain said it was moved up after it arrived at the White House on Wednesday night.

The package provides $400 billion for $1,400 direct payments to most Americans, $350 billion in aid to state and local governments, an expansion of the child tax credit and increased funding for COVID-19 vaccine distribution. Republicans complained the price tag was too steep.

Biden says the package will give poorer families a "fighting chance" and help fire up the engines of the world's biggest economy, something the IMF said Thursday could also help ignite global recovery.

The president said in his speech that the plan "meets the moment" and "if it fails at any point, I will acknowledge that it failed -- but it will not."

"There is light and better days ahead," he said.

The “first wave” of checks are set to go out as early as this weekend, according to White House press secretary Jen Psaki, CNBC reported. Psaki added that payments to every eligible American will continue through the next few weeks.

Delivering an emotional tribute to the more than 530,000 Americans who have died from Covid-19 over the last 12 months, Biden said "While it was different for everyone, we all lost something: a collective suffering, a collective sacrifice."

But he raised hope that the country hardest hit by the global pandemic could overcome the virus if Americans work together and follow health experts' guidelines on wearing masks and getting vaccinated.

"Just as we are emerging from a dark winter into a hopeful spring and summer is not the time to not stick with the rules," he said.

If Americans stay the course, they may be able to mark their cherished July 4th national holiday in somewhat normal circumstances, he said.

"If we do this together, by July the 4th, there's a good chance you, your families and friends will be able to get together in your backyard or in your neighborhood and have a cookout or a barbecue and celebrate Independence Day," he said.

Also read | With an eye on China, Biden to hold first summit with India, Australia, Japan

The United States leads the world in Covid-19 deaths, but it is now surging ahead of European countries and Canada with vaccine production and distribution.

Biden said his initial goal of one million vaccinations administered every day was already being easily surpassed and he planned for the authorities to be "maintaining, beating our current pace of two million shots a day."

To reinforce that huge effort, Biden said he was ordering every state in the country to remove priority group restrictions by May 1, thereby allowing any adult regardless of age or other conditions to be vaccinated.

The Democrat's bid to get the country back on its feet received a huge boost this week when Congress passed his $1.9 trillion economic stimulus package dubbed the American Rescue Plan.

Biden says this will give poorer families a "fighting chance" and help fire up the engines of the world's biggest economy, something the IMF said Thursday could also help ignite global recovery.

The president said in his speech that the plan "meets the moment" and "if it fails at any point, I will acknowledge that it failed -- but it will not."

"There is light and better days ahead," he said.

ATTACKS ON ASIAN AMERICAN DURING PANDEMIC

Biden condemned what he called "vicious hate crimes" committed against Asian Americans since the start of the coronavirus pandemic, calling such acts "un-American" and demanding they stop.

"Too often, we've turned against one another," Biden said in his first primetime address, detailing the progress made in the fight against Covid-19.

The Democratic president decried "vicious hate crimes against Asian Americans who have been attacked, harassed, blamed and scapegoated" over the pandemic, which originated in China.

Also read | Americans will be first to get vaccines, Biden says

"At this very moment, so many of them, our fellow Americans -- they're on the front lines of this pandemic trying to save lives and still, still they're forced to live in fear for their lives just walking down streets in America," Biden said.

Activists say broader anti-Asian discrimination has been fuelled by talk of the "Chinese virus" from former president Donald Trump and others.

Racial motivation is hard to establish in many cases, but reported anti-Asian hate crimes more than doubled from 49 to 122 last year across 16 major US cities including New York and Los Angeles -- even as overall hate crime fell, according to a California State University study.