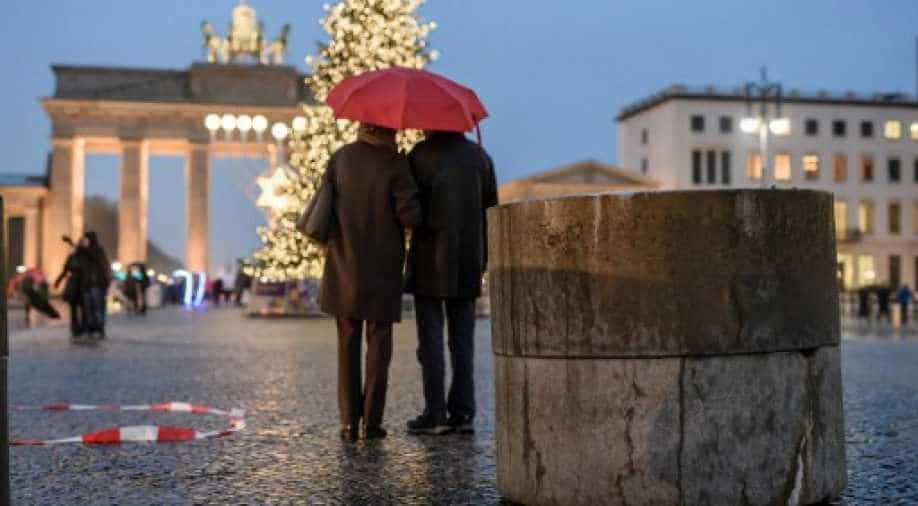 A concrete barricade stands near the Brandenburg Gate in Berlin. Photograph:( AFP )

Sombre but determined not to be cowed, visitors on Thursday flocked to a Berlin Christmas market as it reopened three days after being struck by a deadly truck assault that shocked Germany.

"After an attack like this it's nice to see that people stay strong and carry on," said one of the visitors, David Ulbricht, a 24-year-old event manager.

As leaden skies darkened, a steady crowd stopped by the market, with thousands of people passing through over the afternoon. Stall owners, some teary-eyed, could be seen embracing on their first day back at work since the tragedy.

No music played and lights were kept discreet as a sign of respect for those killed and wounded at the market, which reopened as a manhunt continued for the top suspect, rejected Tunisian asylum seeker Anis Amri, 24.

"You notice the mood is very subdued, everyone is quiet," said one of the food vendors, Jan-Philipp Biermann.

"We're not playing music... because that is meant to reflect joy," he told AFP. "We are upset, we're trying to deal with it. It happened and you keep that in the back of your head."

Another guest, Dieter Wunderlich, took a stoic view, saying that, as other European countries have been hit by bloody attacks, "in a way we had already expected something to happen here, in a way it was predetermined."

Several collections of flowers, candles and condolence messages recalled those killed when the 40-ton lorry crushed yuletide revellers and knocked over stalls and Christmas trees.

"Love not hate," read one sign at the site, while another recalled the phrase "Ich bin ein Berliner" that Cold War-era US president John F. Kennedy famously uttered in a show of support during a 1963 visit to West Berlin.

The section of the Breitscheidplatz market where the truck tore through the crowd was cordoned off with barriers.

The market sits in the shadow of the Kaiser Wilhelm Memorial Church, whose World War II bomb damage has been left unrepaired as a warning against the horrors of war.

The day after the attack, Chancellor Angela Merkel, government ministers and Christian and Muslim religious leaders had joined a memorial service there."