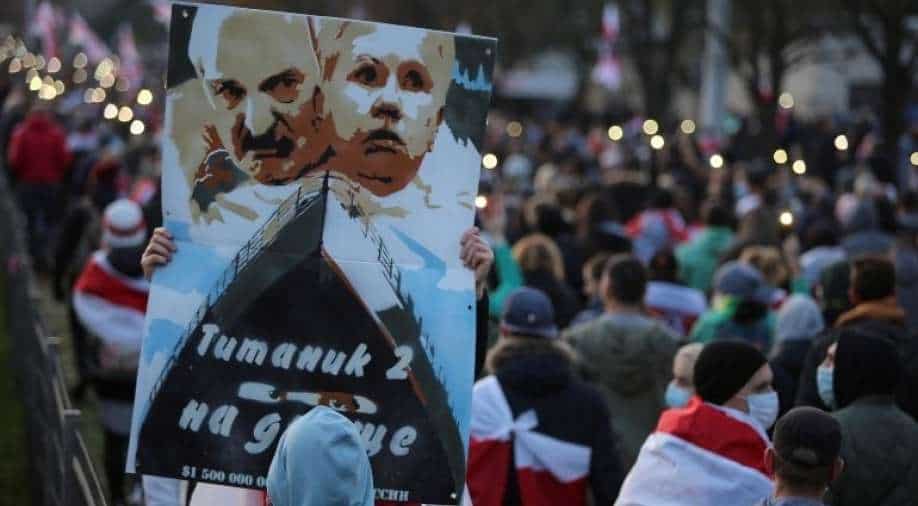 Large crowds of people gathered in the eastern part of Minsk headed toward Kurapaty, a wooded area on the city's outskirts where over 200,000 people were executed by Soviet secret police during Stalinist-era purges.

Police have fired warning shots and begun detaining participants in the capital city of Minsk on Sunday in the latest anti-government protest fueled by a disputed presidential election 12 weeks ago.

Thousands of protesters in Belarus swarmed the streets of the capital to demand the resignation of the country’s longtime president for the 12th straight Sunday and encountered police firing warning shots in the air and using stun grenades to break up the crowds.

As many as 20,000 people took part in the rally, the Visana human rights centre estimated. Large crowds of people gathered in the eastern part of Minsk headed toward Kurapaty, a wooded area on the city's outskirts where over 200,000 people were executed by Soviet secret police during Stalinist-era purges.

Meanwhile, As Belarusian leader Alexander Lukashenko faces increasing pressure over his resignation, he has intensified the efforts to curtail the mass movement and in the latest move shut down the country's borders and replaced the interior minister.

Government has closed its borders with Poland, Latvia, Lithuania and Ukraine over the Covid-19 pandemic. But, the Belarusian leader has been at loggerheads with his European Union neighbours since the country stepped into a political turmoil post his re-election over serious allegations that the polls were rigged.

Nearly three months after Belarus’ authoritarian president’s re-election to a sixth term in a vote widely seen as rigged, demonstrators keep swarming the streets of Belarusian cities to demand his resignation in the most massive and sustained wave of protests the ex-Soviet nation has ever seen.

While President Alexander Lukashenko has relied on massive arrests and intimidation tactics to hold on to power, the continuing rallies have cast an unprecedented challenge to his 26-year rule.