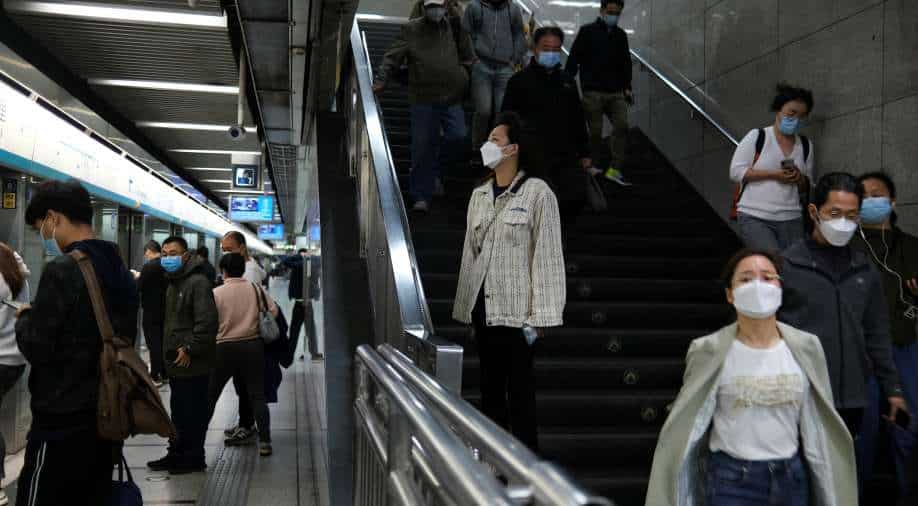 People walk inside a subway station in Beijing Photograph:( Reuters )

Chaoyang district in Beijing has emerged as the epicentre of the virus with authorities conducting daily testing in the area which also houses embassies and offices.

Bejing authorities on Saturday launched another round of mass COVID-19 testing as China's capital grapples with the virus.

Officials have shut more metro stations and buses even as Shanghai residents continue to remain under lockdown for over a month.

Chaoyang district in Beijing has emerged as the epicentre of the virus with authorities conducting daily testing in the area which also houses embassies and offices.

China has been hit by a virus surge not seen since the pandemic hit the country in early 2020. Reports claim at least 60 subway stations have been shut in the nation's capital with dining-in services in restaurants banned in several districts.

On Friday, Beijing reported  45 new symptomatic cases even as authorities announced Asian Games to be held in Hangzhou in September has been postponed.

Hangzhou is located near Shanghai which has been in lockdown due to surging coronavirus cases. China has also postponed the World University Games.

People in Beijing have been asked to work remotely even as authorities have stuck to the "Covid Zero" policy of undertaking mass testing and lockdowns.

Shanghai was hit with a food crisis after a sudden lockdown was announced. The people celebrated Labour Day holiday amid large scale testing as authorities sought to close public places and shut down gyms with several cities reportedly under partial lockdown.

China was hit with the Delta variant in September last year however the Omicron variant began affecting the population in January as the country hosted the Winter Olympics in February.