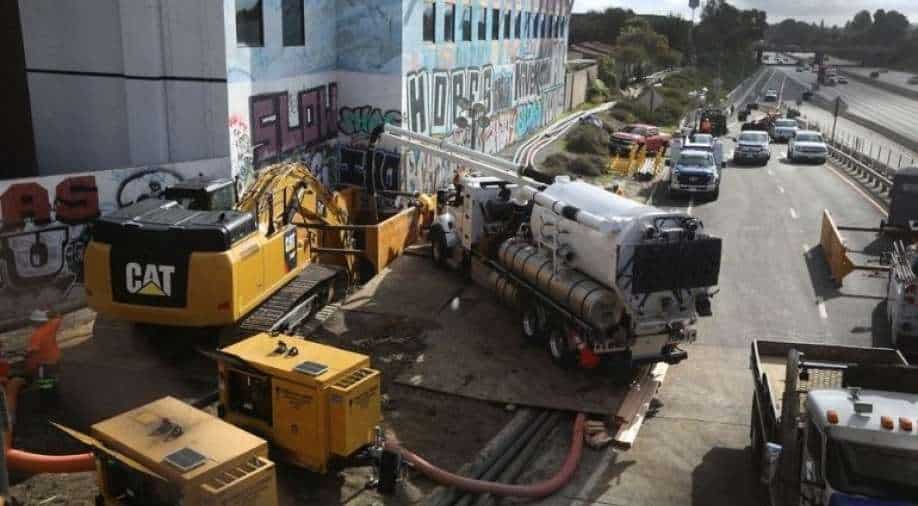 Sanitation engineers work at the site of a leak as the city of Long Beach closed their beaches due to a report of the spill of between two and four million gallons of untreated sewage into a canal, in Carson, California Photograph:( Reuters )

Los Angeles County Sanitation Districts said, "As a safety precaution due to spilled sewage reaching the ocean, the LA County Department of Public Health issued a closure of beaches from Long Beach to Rancho Palos Verdes."

"We will be working with health officials over the coming days to monitor water quality to determine when beaches are safe to reopen and assess environmental impacts."

According to a press release from the City of Long Beach, between 2 million and 4 million gallons (7.6 million to 15 million liters) of raw sewage leaked into the Dominguez Channel, which empties into the Los Angeles harbour.

The leak occurred in the city of Carson and was caused by the failure of a 48-inch sewer main line, the release stated.

City water quality teams from Long Beach are testing the level of pollutants in the affected areas, which includes 7 miles (11 km) of beaches.

Swimming in the waters will remain prohibited until the amounts of pollution return to within normal levels.

Sandi Williams, who had traveled from suburban Massachusetts, told the Los Angeles Times, "You come all this way and you don't get to play in the sand or the ocean? That doesn't seem fair."

"We were so looking forward to this change in scenery, but like everywhere, there's catastrophe."

LA County Supervisor Janice Hahn said on Twitter, "A spill of this magnitude is dangerous and unacceptable, and we need to understand what happened."

"The recent storm undoubtedly contributed, but we need infrastructure that doesn't fail when it rains."

Underwater inspections revealed that a large segment of the pipeline had been displaced and showed a tear of about three inches in the pipe.