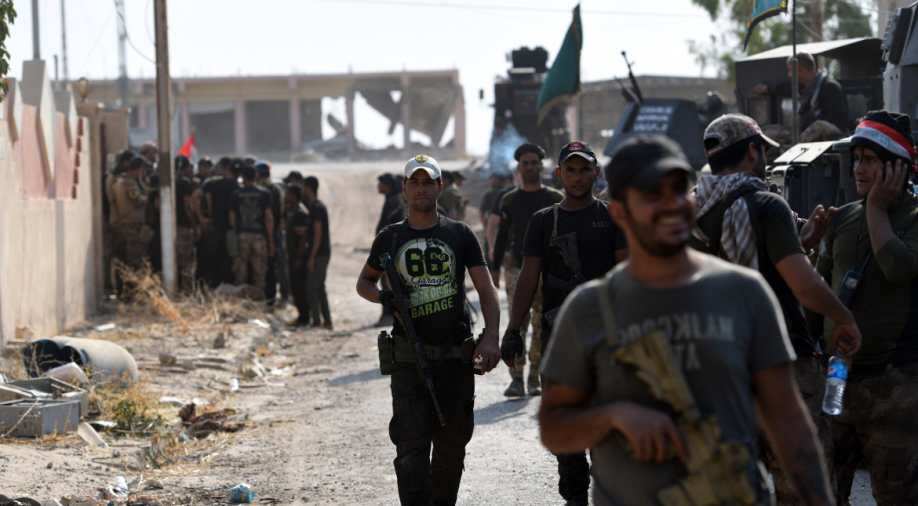 Iraqi counter terrorism soldiers relax during a lull in fighting in the offensive to recapture the city of Mosul from Islamic State militants, on October 23, 2016 near Bartella, Iraq. Photograph:( Getty )

With the Iraqi Army's latest phase in the Mosul offensive to reconquer the last stronghold of the Islamic State (IS) in Iraq, the Counter Terrorism Forces (CTF) and the 9th armoured division of the Iraqi army claim to have liberated six neighbourhoods on the southeastern edge of the city.

Small lanes and tall buildings define Mosul, making it an ideal scenario for the kind of resistance the Islamic State puts on: snipers, urban guerrilla, car bombs and ambushes.

Iraqi forces are involved every day in heavy fighting against the IS that does not seem close to surrendering.

The latest attack by the forces is made up of daily raids from the Iraqi Army's advanced posts within the city borders.

They leave their temporary bases, enter the city, try to advance as far as possible and then return to base. The objective is to gain territory every day in order to move their temporary bases forward inside the cities. The army thus needs to fully secure every area it conquers, an action which can take days even for a few hundred metres. It is an intermittent advance.

The presence of many civilians contributes to the slow pace of advance: engaging in heavy fights in heavily populated areas involves the risk killing of many people who are not fighting any war.

For the Iraqi army, reconquering Mosul is also a matter of restoring a reputation they lost in 2014 when 30,000 Iraqi soldiers withdrew and the 1,000 militant-strong IS took control of the city, its international airport and all the military and civil facilities in a week.

Lieutenant-General Raed Shakir Jawdat declared on Saturday that Iraqi forces took control of Hammam al-Alil, a town located 15 km south of Mosul which prior to IS control was home to approximately 65,000 people.

Regarding the operation, Major-General Najm al-Jabouri informed the media that some 70 terrorists were posted in the town.

"Our elite forces have reached an area just 4 km (a little more than 2 miles) from Mosul airport," he told Al-Hurra television channel. The general said his forces had destroyed 17 bomb-laden cars meant to target the troops while advancing.

The Islamic State has been using civilians as human shields, a strategy which already used in many other battles. When troops start advancing within their territory, IS militants force civilians to follow them to other areas they still control in order to avoid direct attacks during their movements.

The United Nations said that the militants transported 1,600 abducted civilians from Hammam al-Alil to the town of Tal Afar, west of Mosul, earlier this week and took another 150 families from the town to Mosul the next day. UN human rights spokesperson Ravina Shamdasani said that IS terrorists force people to handover their children, especially young boys over nine years who could be used in the future as child soldiers.

Civilians, whenever possible, are now leaving their homes as soon as the Iraqi regular forces advance and travel towards the refugee camps that NGOs have set up for months in preparation to what could be a massive exodus. There are no certain figures, but according to William Lacy Swing, head of the International Organisation for Migration (IOM), after a week of fighting in Mosul, 31,000 persons left their homes.