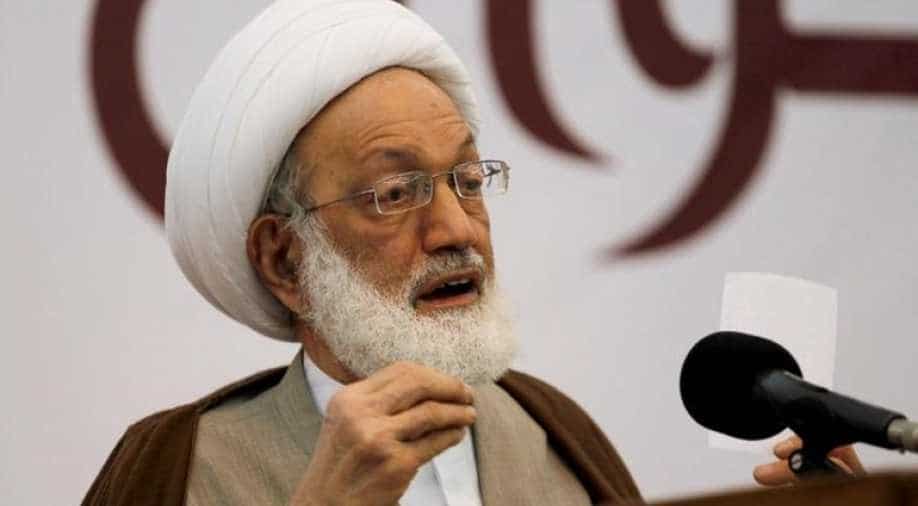 A police raid into the Shia leader's house causes protests and clashes. Security forces fire at the crowd, kill one and injure hundreds in the latest incident in the six-year-long conflict between Bahrain's Sunni monarchy and the majority Shia population. S. Arabia and Iran are fuelling this fire.

The confrontation between the Shi'ite citizens and the Sunni monarchy continues in the kingdom of Bahrain. The country's police forces searched the house of the main Shia spiritual leader, Ayatollah Isa Qassim, in the town of Diraz.

Locals took to the streets to protest the move. According to the Bahrain Centre for Human Rights, security forces opened fire against them killing at least one man who showed signs of pellet gun injuries. Further media reports speak about five people killed, but WION could not independently verify the figure.

The police arrested fifty people during the raid, but Qassim was not among them.

The eighty-year-old Ayatollah Isa Qassim is currently facing threats of expulsion from his own country after authorities revoked his citizenship on charges of having links to Iran. He is accused of having diverted towards Tehran funds coming from the Shi'ite community donations.

Qassim's case is not isolated. The UN high commissioner for human rights Prince Zeid bin Ra'ad Al-Hussain said in a statement that at least "250 people in Bahrain have reportedly been stripped of their citizenship by the government because of their alleged disloyalty to the interests of the Kingdom".

Ebtasam Alsaegh, from the village of Bani Jamra, close to Diraz, told Reuters that mosques were telling people to take to the streets to protect Qassim.

"The situation is terrifying. ... It's making people really angry and the young men are taking to the streets. The mosque speakers are calling out 'God is Great', urging people to come out and protect Sheikh Qassim," she said.

Attack on #Duraz area is still ongoing. Reports of several injuries and one death until this moment#bahrain pic.twitter.com/HTBEjIez1c

After the forceful dissolution of the main Shia political party Al Wefaq in 2016, the crackdown against Qassim reinforces the Shiite fears of a Sunni-led direct attack against their entire community.

Bahrain, a majority Shia country, is ruled by a Sunni monarchy led by King Hamad bin Issa al-Khalifa. The nation has witnessed constant disorder and protests since 2011 when the Arab spring reached its borders.

People took to the street to demand reforms and, as in many other countries, were heavily repressed. Bahrain's Shia community had a prominent role in the protests, demanding for more political representation. The police arrested hundreds of people.

This led to the common pattern which characterises the Arab spring: dissent, repression and radicalisation/sectarianism.

Sectarianism in West Asia means Sunni versus Shia, but it often has little to do with religion: it is more of a hegemony struggle between Saudi Arabia and Iran. Both countries use the people's sincere religious sentiments to expand their political, economic and military influence.

King Hamad accused Iran of being behind the uprising, saying that Tehran was aiming at overthrowing him by force.

Since then, the necessity of stemming an eventual Iranian influence has been the justification for any act of repression, which the monarchy repeatedly denies.

Little moves in the Arabic peninsula without Saudi's knowledge or intervention and during the 2011 protests, the Gulf Cooperation Council responded to King al-Khalifa's call and sent more than a thousand soldiers, the majority of which were from Saudi's ranks.

On Wednesday, the Saudi Press Agency quoted an official Saudi foreign affair spokesperson affirming his country's support for the measures taken by the kingdom of Bahrain in order to maintain security, including the latest measures taken in Diraz.

Iran, as usual, has never openly rejected Bahrain's accusations and keeps acting in an ambiguous manner.

An Iranian foreign ministry spokesman condemned the raid in Diraz and said that the Bahraini government "will be responsible for all consequences". He did not make clear how.

Their statements imply that they are keeping an eye on Bahrain, but then Tehran denies officially any direct involvement. This resembles the strategy Iran is applying in the war in Yemen.

Despite its small dimension, Bahrain enjoys a strategic location in the Persian Gulf and it is a solid US ally since 1971. The US Fifth Fleet, which overlooks operations in the Persian Gulf, the Red Sea and the Arabian Sea, has its headquarters in the country.

US President Donald Trump met with King Hamad bin Issa al-Khalifa during his visit in Saudi Arabia, reassuring him about his intentions.

"Our countries have a wonderful relationship together, but there has been a little strain, but there won't be strain with this administration," said Trump. "We're going to have a very, very long-term relationship. I look forward to it very much - many of the same things in common."

In a departure from Obama's policies, the US secretary of state Rex Tillerson lifted all human-rights based restrictions against Bahrain thus giving a green light to $5 billion sale of 19 Lockheed Martin F-16 aircrafts.

This is, once again, a clear sign of the US intention to keep sitting on Saudi Arabia's side in an anti-Iran oriented West Asia policy which risks to further destabilise the region.