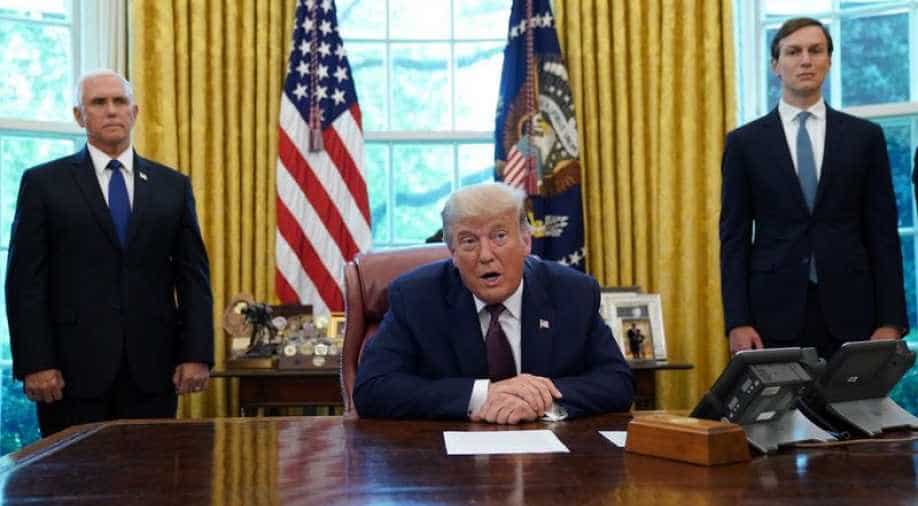 Trump tweeted out the news after he spoke by phone to both Bahrain’s King Hamad bin Isa Al Khalifa and Israeli Prime Minister Benjamin Netanyahu, the White House said.

Bahrain has joined the United Arab Emirates in striking an agreement to normalise relations with Israel, US President Donald Trump said on Friday. This is being seen as a dramatic move aimed at easing tensions in the Middle East.

Trump tweeted out the news after he spoke by phone to both Bahrain’s King Hamad bin Isa Al Khalifa and Israeli Prime Minister Benjamin Netanyahu, the White House said.

"Another HISTORIC breakthrough today! Our two GREAT friends Israel and the Kingdom of Bahrain agree to a Peace Deal – the second Arab country to make peace with Israel in 30 days!" he wrote.

Another HISTORIC breakthrough today! Our two GREAT friends Israel and the Kingdom of Bahrain agree to a Peace Deal – the second Arab country to make peace with Israel in 30 days!

A joint statement issued by the three leaders said they had agreed on "establishment of full diplomatic relations between Israel and the Kingdom of Bahrain."

"This is a historic breakthrough to further peace in the Middle East. Opening direct dialogue and ties between these two dynamic societies and advanced economies will continue the positive transformation of the Middle East and increase stability, security, and prosperity in the region," the joint statement said.

Joint Statement of the United States, the Kingdom of Bahrain, and the State of Israel pic.twitter.com/xMquRkGtpM

The statement said Bahrain accepted Trump's invitation to join Israel and the UAE at the signing ceremony. It said Netanyahu and Foreign Minister Abdullatif Al Zayani of Bahrain will be signing a "historic Declaration of Peace" at the event.

The parties "will continue their efforts in this regard to achieve a just, comprehensive, and enduring resolution to the Israeli-Palestinian conflict to enable the Palestinian people to realize their full potential," the joint statement said.

The United Arab Emirates last month agreed to normalise ties with Israel under a US-brokered deal. That deal is scheduled to be signed on September 15 at a White House ceremony hosted by Trump and attended by Israeli Prime Minister Benjamin Netanyahu and UAE Foreign Minister Sheikh Abdullah bin Zayed al-Nahyan.

The easing of relations with Israel comes amid a backdrop of shared fears about the threat of Iran to the region.

The Trump administration has tried to coax other Sunni Arab countries to engage with Israel. The most powerful of those, Saudi Arabia, has signaled it is not ready.

Bahrain, a small island state, is a close ally of Saudi Arabia and the site of the US Navy's regional headquarters. Riyadh in 2011 sent troops to Bahrain to help quell an uprising and, alongside Kuwait and the UAE, in 2018 offered Bahrain a $10 billion economic bailout.

Friday's deal makes Bahrain the fourth Arab country to reach such an agreement with Israel since exchanging embassies with Egypt and Jordan decades ago.

Last week, Bahrain said it would allow flights between Israel and the UAE to use its airspace. This followed a Saudi decision to allow an Israeli commercial airliner to fly over it on the way to the UAE.