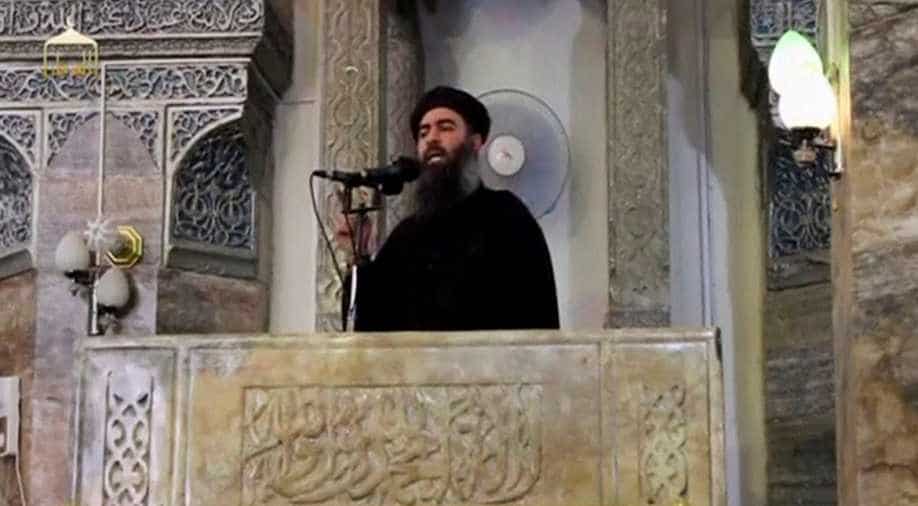 Islamic State leader Abu Bakr al-Baghdadi making what would have been his first public appearance at a mosque in Mosul, according to a video recording posted on the Internet on July 5, 2014, in this still image taken from a video. Photograph:( Reuters )

''Baghdadi brought three of his young children with him as he tried to escape down the tunnel. He then ignited a suicide vest, also killing his three children,'' Trump said.

US President Donald Trump on Sunday said that fugitive Islamic State leader Abu Bakr al-Baghdadi died in a raid by US special forces in northwest Syria, in a major blow to the jihadist group.

Trump told the nation in a televised address from the White House that US forces killed a "large number" of Islamic State militants during the raid which culminated in cornering Baghdadi in a tunnel, where he set off a suicide vest.

"He ignited his vest, killing himself," Trump said.

"He died after running into a dead end tunnel, whimpering and crying and screaming all the way," Trump said, adding that three of Baghdadi's children also died in the blast.

Trump said that the raid -- which required flying more than an hour by helicopter in both directions from an undisclosed base -- had been accomplished by help from Russia, Syria, Turkey and Iraq.

Special forces "executed a dangerous and daring nightime raid in northwestern Syria and accomplished their mission in grand style."

Test results gave “certain and immediate identification”, said Trump. “It was him.”

''He was a sick and depraved man and now he is gone,'' Trump said.

Trump said the US had been following Baghdadi for some weeks.

It was dangerous for the US to fly over other people’s territory, but they had cooperation from other countries, Trump said and added: “We flew very, very low and very fast.”

He said under his direction the US has “obliterated his caliphate” 100 per cent. He described Baghdadi and his supporters as losers.

“Russia treated us great... Iraq was excellent. We really had great cooperation,” he says. Trump says Turkey knew they were “going in”.
“We met with gunfire coming in, but that was local gunfire,” he said.

Trump warned other terrorist organisations and said that the US would go after them.