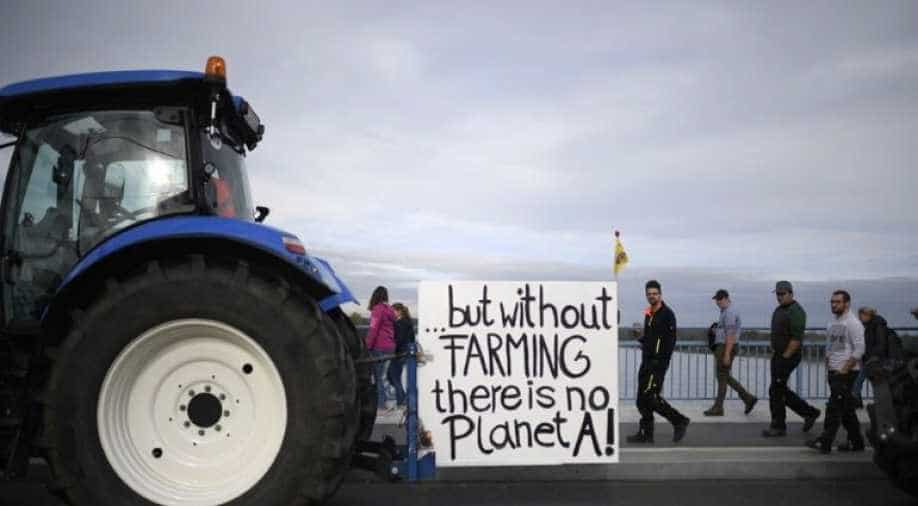 A tractor with a sign reading "...but without farming there is no planet A" Photograph:( AFP )

Austria's government said Monday it would not implement a ban on the controversial herbicide glyphosate, despite MPs having voted for it to come into effect on January 1.

In a letter to the speaker of parliament, Chancellor Brigitte Bierlein said the European Commission had not been given the necessary notification about the measure and it therefore could not enter into force.

"I want to stress that this is purely a formal legal decision and not about assessing the content of the proposal," Bierlein said, adding that the government had sought legal advice before taking the decision.

Austria would have been the first EU country to enforce a ban on the herbicide after lawmakers approved the measure in July.

Glyphosate is classified as "probably carcinogenic" by the World Health Organisation (WHO), but the EU in December 2017 renewed the weedkiller's licence across Europe for five years.

Its use has sparked debate in several European countries, not least with regard to how it could be replaced given its heavy use in the farming sector.

Although Brussels itself had not attempted to prevent the ban, the government said the European Commission "had indicated the possibility of infringement proceedings" against Austria for not following the proper procedure.

Campaign group Greenpeace reacted furiously to the government's decision, calling it a "betrayal of democracy" and accusing the government of using "legal excuses".

July's vote in parliament took the government by surprise as it had not proposed the legislation.

It passed thanks to a temporary alliance of all parties in parliament except for the centre-right People's Party (OeVP).

The current interim government will remain in place until a new coalition emerges from the results of snap elections held in September.

The OeVP, led by ex-chancellor Sebastian Kurz, finished as by far the single largest party in the poll.

The OeVP is now in coalition talks with the other big winner of September's poll, the Greens, who support the glyphosate ban.