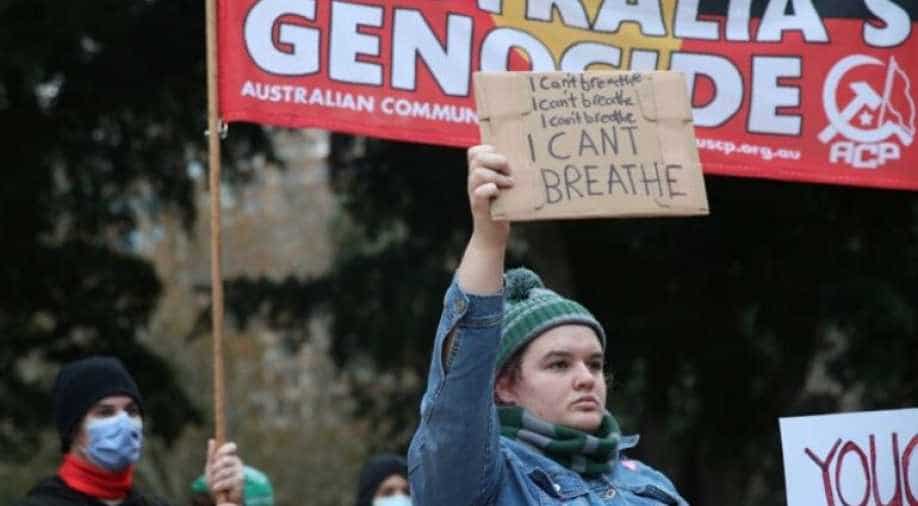 A woman holds up a sign as people protest in solidarity with those in the United States protesting police brutality and the death in Minneapolis police custody of George Floyd, in Sydney, Australia, June 2, 2020. Photograph:( Reuters )

Up to 10,000 people were expected to march in Sydney on Saturday to express solidarity with US protestors and demand an end to frequent Aboriginal deaths in custody in Australia.

An Australian court on Friday banned a Black Lives Matter protest planned in Sydney, backing government claims it could risk spreading the coronavirus.

Up to 10,000 people were expected to march in Sydney on Saturday to express solidarity with US protestors and demand an end to frequent Aboriginal deaths in custody in Australia.

On the eve of the protest, the police backed by prominent local conservative politicians aunched legal action to ban the rally on health grounds.

Justice Desmond Fagan agreed, ruling that the march should be prohibited because health concerns outweighed any deferment of the right to protest.

"Everybody has given up a lot in order to defeat this disease," Fagan said, "it's not a time to throw out our caution."

Australia has detected a sustained drop in the number of COVID-19 cases, but social distancing rules remain in force and mass gatherings are not permitted.

Civil rights protests shaking the United States have resonated with many in Australia a country that also wrestles with the legacy of a racist past.

Several protests have already taken place across Australia and the planned march in Sydney is one among several due to take place on Saturday.

Organisers hoped to highlight the high levels of imprisonment for First Nations Australians and the large number of indigenous deaths in custody more than 400 in the last three decades.

The legal action was a U-turn for the police who initially appeared to have granted the Sydney event the green light -- and follows heavy criticism of the protest in the country's strongly conservative media.

Organisers indicated they were determined to go ahead, using a groundswell of public opinion to press for long-stalled reforms.

"Tomorrow, we are going to march if they like it or not, because this is our land and nothing is going to stop any of us," said Latona Dungay, whose son David died in prison in 2015.

"This is not what's needed. This needs cooperation and understanding, not force," Shoebridge said.

Protesters in Melbourne were similarly warned they could face fines for attending a rally in the city, with authorities urging people to stay home.

Earlier on Friday, hundreds of protesters gathered in the nation's capital Canberra even as Prime Minister Scott Morrison urged people to stay home.

"Let's find a better way and another way to express these sentiments rather than putting your own health at risk," Morrison said.

He admitted there was more to be done to address indigenous inequality but continued to reject parallels with the United States.

"Australia is not other places, so let's deal with this as Australians and not appropriate what's happening in other countries to our country at this time."