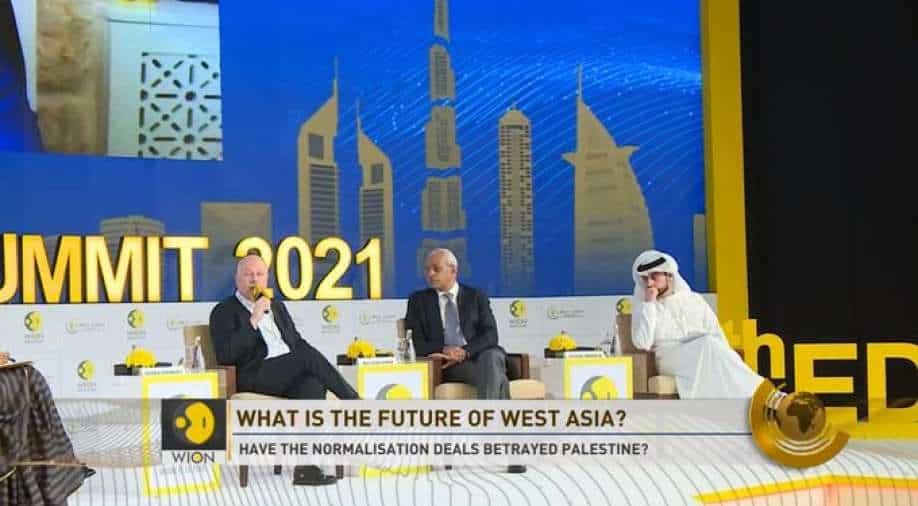 In power politics, enemies of today can be friends of tomorrow. More so on the shifting sands of West Asia, where marriages of convenience rule.

Here, historic shifts rarely take place without Israel’s involvement. So while its pledges to not go ahead with the annexation of one-third of the West Bank and the Jordan Valley was seen as cold comfort for the Palestinians, Ramallah was left weakened by the Gulf's growing support to peace efforts with Israel.

So where does it leave Palestine? Palestinian reaction, initially, had been to decry the UAE’s normalisation of ties with Israel. The Palestinian ambassador to the UAE was even recalled.

Fleur Hassan-Nahoum, deputy mayor of Jerusalem and a major policy maker of Israel, says this does not stand to halt the peace process in West Asia.

"Israel has, on more than one occasion, offered a solution and peace deal, and it has been the Palestinian rejectionism that has got us to the point," she said on Wednesday at the WION Global Summit in Dubai.

"We are not going to allow Palestinian rejectionism affect the process of peace in West Asia. People are going to gain most from tourism in Jerusalem," she told the session titled Peace Deals and the Shifting Sands of West Asia.

"It’s a gain-gain for all the populations in the region. What is the point in rejectionism while the entire Middle East is supporting the Abraham Accords? That's the bottom-line, peace is always good. The accords now have its own momentum," she said.

Ibrahim Shukralla, an Emirati news editor, said he hoped Israel would not resume the annexation plan as it would affect the peace plans.

Mustapha Noman, former deputy foreign minister of Yemen, on his part, said, "I have been calling for recognition of Israelis and Arabs from 2000. This does not mean that recognition is the end of the story. It should be the start of the story. It is mainly between the Israelis and Palestinians since day one. The Arabs later became sentimental about their brothers. The normalisation of the four countries with Israel should be a boost for normalisation. I agree that the Palestinian leadership is not positive and that they are consuming it for their own personal interest. The new generation might have a different view and perspective. I agree with that. Israel is more powerful in that region and they have more responsibility. This is where Israel can take really strong steps."

But Jason D Greenblatt, an aide of former US president Donald Trump,  who brokered the Israel-UAE deal, wants other issues to be looked at too.

"Yes, the Palestinian issue must be resolved. But that is a separate issue. We want to fix Yemen, Palestine and Syria. We should not club the issues together. The UAE offered help at the start of the pandemic for Palestinians, but they rejected it. We have to demand responsibility from Palestinian leadership as well. The issues of Palestine, Yemen and Syria shouldn't be mixed. They must be though fixed and resolved," he said.

"We did prove that the Israeli-Palestinian conflict and Israeli-Arab conflict, though intricately tied together, can indeed be separately solved - and that's essential for this region."

The Palestinians currently remain subject to Israeli military occupation in the Gaza Strip, despite a little progress made towards a two-state solution with the 1993–95 Oslo Accords.