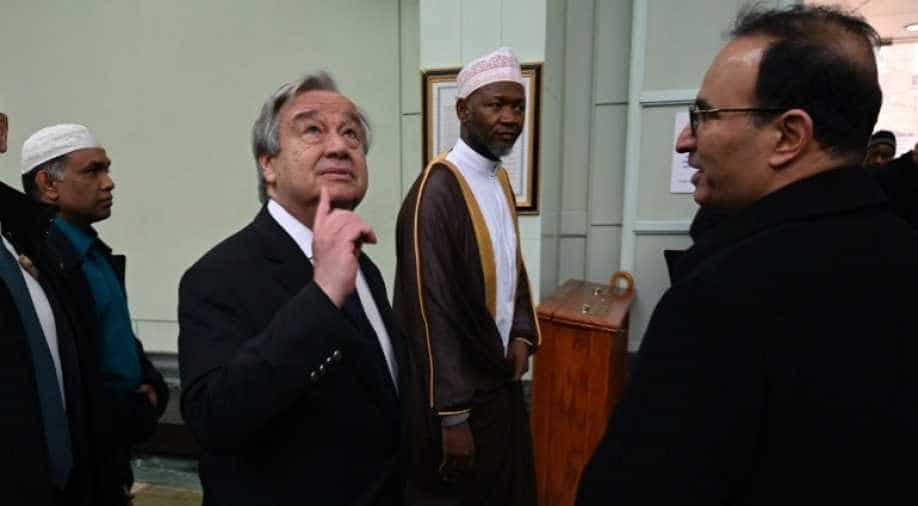 'Mosques and all places of prayer and contemplation should be safe havens, not sites of terror,' Guterres said.

UN Secretary-General Antonio Guterres on Friday pledged action to help protect religious sites worldwide, during a visit to a New York Islamic centre one week after the New Zealand mosque shootings that shocked the world.

"Mosques and all places of prayer and contemplation should be safe havens, not sites of terror," Guterres said. "Worshippers must feel safe to worship."

Guterres met with worshippers at the Islamic Cultural Center's mosque in Manhattan as they gathered ahead of Friday prayers and offered "solidarity with the Muslim community from New York to New Zealand and beyond."

Speaking to reporters, the UN chief announced that he had tasked Spanish diplomat Miguel Moratinos with the drafting of an action plan for the United Nations to support efforts to protect religious sites.

Moratinos heads the UN Alliance of Civilisations, a group led by Spain and Turkey that seeks to foster a better understanding between cultures and societies.

The group will reach out to governments, religious leaders and organizations to explore actions to prevent such attacks as the Christchurch shooting that left 50 dead.

Addressing a meeting in Istanbul of Muslim countries, Turkish President Recep Tayyip Erdogan called on the world to fight Islamophobia in the same way it fought anti-Semitism after the World War II Holocaust.

Guterres said the attack in New Zealand was "utterly appalling" but "perhaps not utterly surprising", citing the rise of anti-Muslim hatred, anti-Semitism and bigotry.

Social media is being exploited to spread bigotry while many political movements either openly admit to being neo-Nazi or are "lip-syncing their words," he added.

The UN chief spoke of the victims of the Christchurch shooting, some of whom lost their lives saving others, and said he was "deeply moved by the extraordinary display of leadership, love and community from the people of New Zealand."