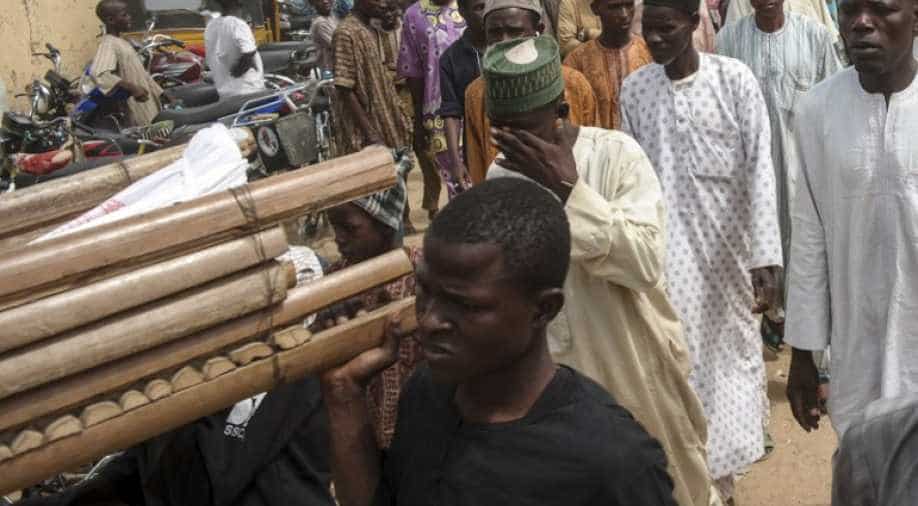 The medical charity Doctors Without Borders (MSF) called the attack 'shocking and unacceptable' and said that at least 120 were wounded in the bombing. Photograph:( AFP )

The medical charity Doctors Without Borders (MSF) called the attack "shocking and unacceptable" and said that at least 120 were wounded and 52 dead in the bombing.

The military did not reveal any official death toll but blamed "the fog of war" for the mistake. News agency AFP reported a senior commander describing the casualties from the strike as "huge"

The incident happened at about 9 am (0800 GMT) in Rann, in the far north of Borno state, the epicentre of the jihadists' insurgency, as aid workers distributed food to civilians who were forced to flee the violence, AFP reported.

A local resident, Abba Abiso, told AFP by telephone: "At least 25 were killed and many more injured."

The International Committee of the Red Cross (ICRC) said six Nigerian Red Cross members were among those killed, reported AFP.

Nigerian Army Major General Lucky Irabor, who heads operations against the militants, said the air force had been given coordinates of "Boko Haram terrorists" in the Kala-Balge area.

"Unfortunately the strike was conducted but it turned out that the locals somewhere in Rann were affected," he told reporters at a briefing in the Borno state capital, Maiduguri.

"These are the result of fog of war," he added. "It is unfortunate. That is the reason why this war must come to an end."

Defence spokesman Rabe Abubakar in Abuja described the incident as "a mistake", adding: "We are actually in grief. It's unfortunate and it's really not intended."

Abiso suggested that the error had occured because the rebel fighters had moved their base from Sambisa Forest to Kala.

"In recent weeks Boko Haram has moved base to Kala from Sambisa Forest and obviously a military jet mistook Rann for Kala and bombarded, killing many civilians," he added.

Nigerian President Muhammadu Buhari expressed his regret and sympathies with the families of the dead and injured in the bombing.

An air force jet killed five people and injured several when it mistook Kayamla village for a Boko Haram camp during a night raid in March 2014.

In November last year, the United Nations warned that 75,000 children risked starving to death within months as a result of the conflict in the region.