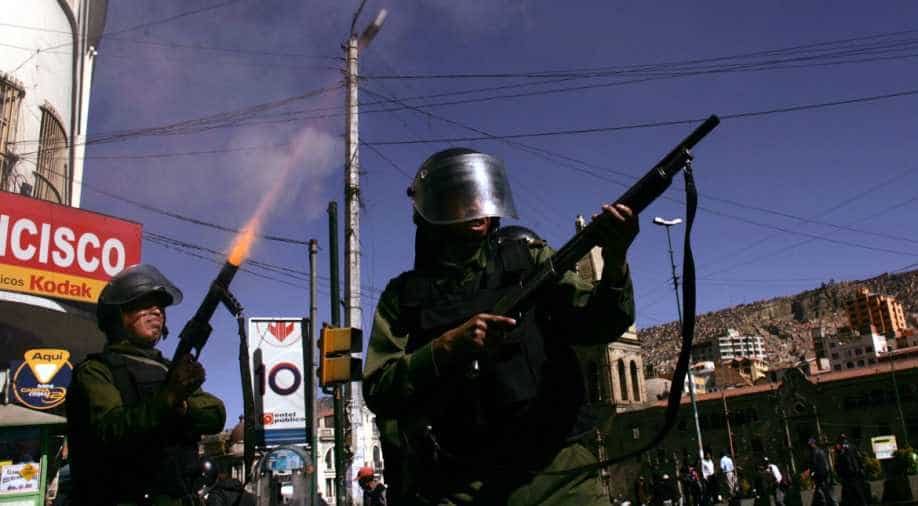 Presidency Minister Juan Ramon Quintana had called on union leaders to negotiate with the government on a solution but no breakthrough has been reported. In image: Police fire tear gas canisters towards protesters June 2, 2005 in La Paz, Bolivia. Photograph:( Getty )

Follow Us
At least 50 people were arrested and dozens more injured during clashes on Wednesday between protesters and riot policemen in the Bolivian city of Cochabamba, while blockades and strikes were reported in other parts of the country.

The clashes took place at the start of a 72-hour national strike organised by the main unions in the country.

Local media reported tear gas was fired at protesters who were blocking the highway from Cochabama to La Paz.

The southwestern department of Potosi reported public schools were closed, while blockades, strikes and partial work stoppages were reported around the country, which have affected the normal development of the day.

In La Paz, workers marched also and warned that things could get worse if the government didn't respond to their satisfaction.

"But we hope this does not get prolonged until tomorrow, because the situation will be more forceful tomorrow and we hope the government calls to hold talks, particularly for the public, to make good decisions and not proceed as it has in Cochabamba with the onslaught of workers. There are so many wounded here in the mining sector, where we have clearly come to defend the expansion of the Bolivian Central Workers, the resolutions, job stability but particularly if they are coming to attack our physical integrity, we will have to respond with our combative dynamite because in the end they are going to provoke us," said Orlando Gutierrez, a leader of the union miners.

A 72 hour national workers strike - featuring a cross section of employees from different sectors such as teaching, manufacturing and mining - was announced at the weekend by the Bolivian Central Workers Union (COB) to protest the government of President Evo Morales.

Presidency Minister Juan Ramon Quintana had called on union leaders to negotiate with the government on a solution but no breakthrough has been reported.

On Wednesday, Government Minister Carlos Romero said the strike could damage the country.

"The problem of 180 people cannot paralyse the function of a country that has been growing economically with the sustainable production over the last 10 years," he said.

The marches and strikes come just weeks after 800 people were laid off when President Evo Morales closed the Enatex national textile company earlier this month.

Protesters fear other state companies will start laying off workers. For example the company Siderurgica del Mutun, the largest iron reserve in the world, is on strike due to unemployment.

South America's once dominant populist leftist bloc, which has lost steam as voters have tired of cronyism, and tumbling commodities prices have provided less income to fuel government spending.

In recent months, Morales' popularity has been damaged by revelations that a company that employs an ex-girlfriend had won lucrative government contracts. The problem was compounded when photos emerged showing the couple together last year, although he had said the relationship ended in 2007.

In February, Morales acknowledged defeat in a referendum that would have cleared the way for him to run for a fourth term in 2019.

Morales was the first indigenous Bolivian to be voted into the country's presidency in 2006 on a ticket to cut poverty and raise living standards. Shortly after coming into power he garnered widespread support from working class voters after nationalising oil and gas sectors of the economy.

But fast forward a decade, Morales' traditional supporter base now accuse their leader of stabbing them in the back.

Joining the union workers are disabled citizens who have been protesting for months for an increase in state benefits but with little progress.