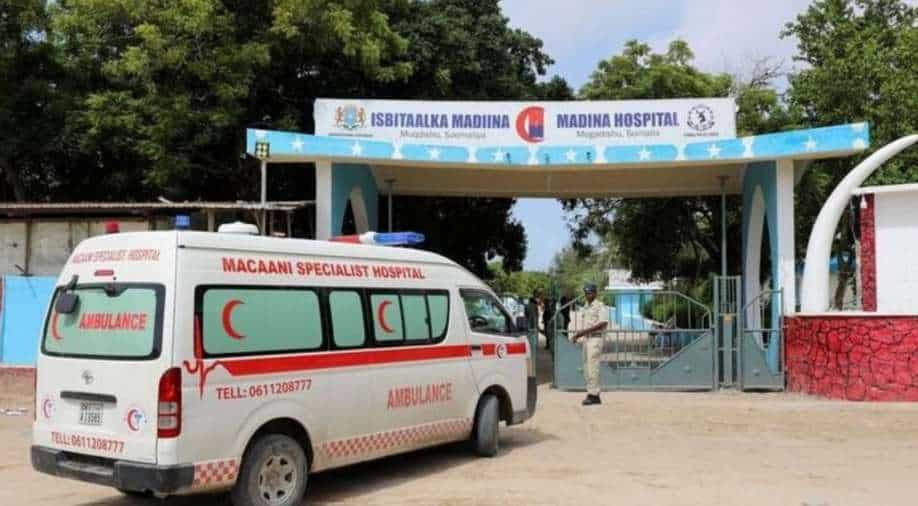 An ambulance carrying wounded from a suicide bombing attack at a military base arrives at the Madina Hospital in Mogadishu, Somalia Photograph:( Reuters )

At least 15 people were killed on Tuesday in a suicide bombing as recruits lined up outside an army camp in the Somali capital Mogadishu, a Reuters witness who counted the bodies at Madina Hospital said.

Officials at the hospital confirmed the dead were killed in an attack earlier in the day at a checkpoint outside the General Degaban military training camp in the capital.

There was no immediate claim of responsibility. Islamist group al Shabaab frequently carries out bombings in the Horn of Africa country.

Dozens of people crowded outside Madina Hospital searching for their missing relatives.

"My son is dead. I have seen with my eyes. Many boys perished. They were asked to come for recruitment and then bombed. The government is still hiding other casualties," said Amina Farah, sobbing as she collapsed into the arms of family members at the hospital.

Army recruit Ahmed Ali, who was struck in the head by shrapnel, told Reuters at the hospital: "The place was overcrowded with new recruits and soldiers when the blast occurred."

A Somali military officer, Odawaa Yusuf Rage, told state media earlier on Tuesday that 10 new recruits had been killed, and 20 others wounded, when a suicide bomber detonated explosives.