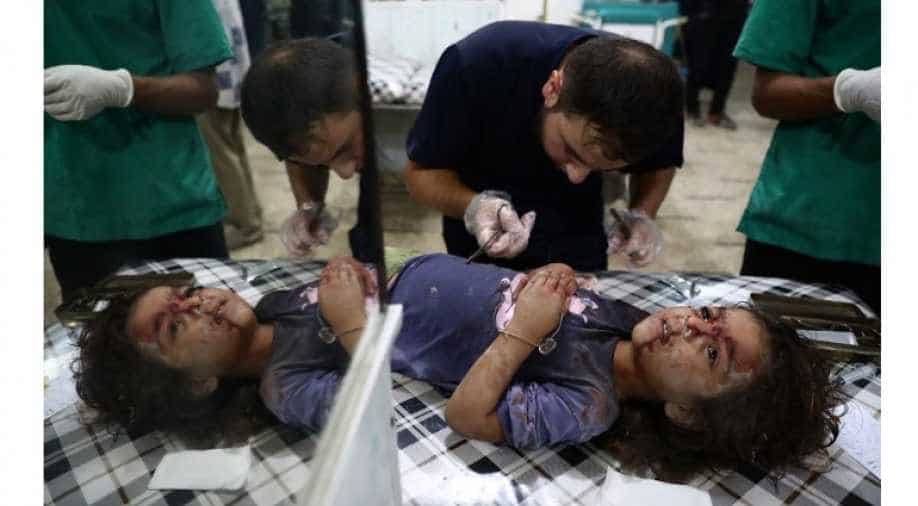 In photo: An injured Syrian child receives treatment at a makeshift hospital on October 3, 2016. Photograph:( Getty )

Syria's pro-Assad forces and militias under Iranian command captured about 90 per cent of the opposition-held areas of eastern Aleppo, The Daily Beast reports.

The rebels are withdrawing in defeat, as the last chance at receiving reinforcements and supplies seems to be about nil as pro-regime forces have cut off the supply lines, The Daily Beast reports.

Today has seen intense bombings of houses and apartment buildings, and the destruction is reported to be on such an enormous scale that the death toll for now cannot be calculated, and the neighbourhoods of Bustan al-Qasr, al-Kallasa, al-Farod and al-Salhin in the Old City, as well as Sheikh Saed, in the southern district, are all now under regime control, The Daily Beast reports.

The White Helmets, or Syrian Civil Defense, an internationally renowned team of first responders, said more than 90 bodies of people presumed to be still alive are under debris, and that its volunteer staff reported they could hear children trapped in the rubbles of their houses, The Daily Beast reports.

Opposition media have circulated unconfirmed reports that atrocities have already begun, such as the summary execution of civilians including women and children, The Daily Beast reports.

These reports could not be independetly verified by The Daily Beast or WION.

However, UNHCR spokesperson Rupert Colville said, "In all, as of yesterday evening, we have received reports of pro-Government forces killing at least 82 civilians (including 11 women and 13 children) in four different neighbourhoods -- Bustan al-Qasr, al-Ferdous, al-Kallaseh, and al-Saleheen."

The official Syrian news agency SANA claimed that eight people were killed and 47 were injured in regime-held Aleppo after opposition fighters bombed the city. Most of the victims were women and children, according to the agency.

Reuters reported a military source as saying that the last rebel pocked could fall "any moment".

Some Syrian residents and activists spent the day on social media saying goodbye, warning that they were about to be killed.