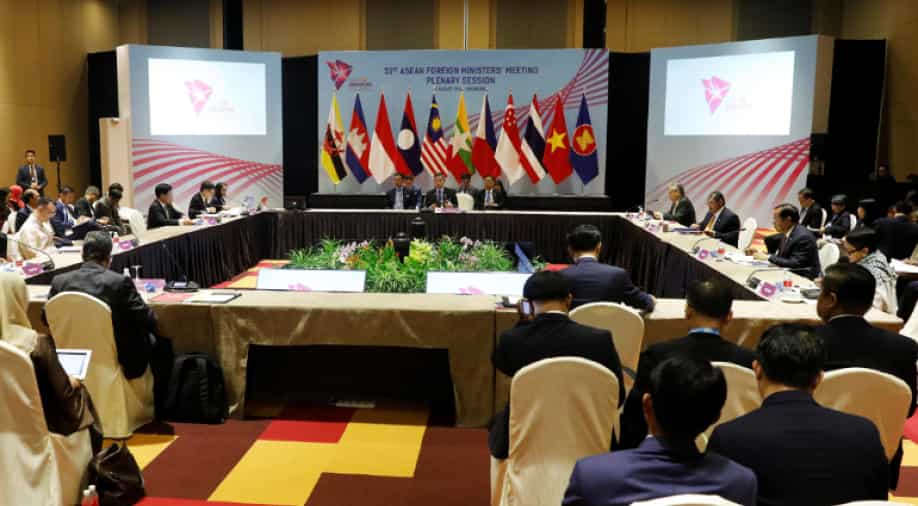 Southeast Asia and China have agreed on a working text to continue long, drawn-out negotiations over a code of conduct in the disputed South China Sea, with officials from both sides on Thursday lauding it as a “milestone”.

A number of the members of the Association of Southeast Asian Nations (Asean) and China have overlapping claims to islands in the sea, one of the world’s busiest waterways. For years they have been discussing a pact to prevent an escalation of disputes.

“I am pleased to announce yet another milestone in the COC (code of conduct) process,” said Vivian Balakrishnan, the foreign minister of Singapore who is hosting the meeting of regional leaders and lawmakers from around the world in the city-state.

He said the “single draft COC negotiating text”, agreed at high-level talks in June but only announced on Thursday, would serve as the basis for negotiations.

Critics say the consensus approach to negotiations on the code could mean a final deal is still years off and works in China’s favour as a delaying tactic to ease scrutiny of its militarisation of man-made islands in the region.

Also on the agenda for Asean members over the next few days is reaching a cybersecurity deal with Russia, which the United States has accused of election meddling, according to a draft of a communique seen by Reuters set to be released on Saturday.

The document shows Asean will also reiterate its commitment to wrap up a major trade pact backed by China, against the backdrop of protectionist trade policies from the United States, and urge steps towards denuclearisation of the Korean peninsula.

Singapore suffered its worst cyber attack earlier this year, when hackers stole the personal information of about 1.5 million people, including Prime Minister Lee Hsien Loong, from a government health database.

Malaysia also said in March it had foiled a cyber-heist of its central bank.

Neither country has identified the hackers and neither suggested the involvement of Russia, which last year appointed a dedicated ambassador to Asean based in Jakarta, the Indonesian capital.

“We welcome the further strengthening (of) our cooperation in cybersecurity with Russia through the issuance of the statement of Asean and Russian foreign ministers,” the draft of the ten-member communique stated, adding that the title of the statement could change depending on negotiations.

US intelligence agencies have said a Russian propaganda arm tried to tamper with the 2016 presidential election by posting and buying ads on Facebook. Moscow has denied involvement.

Facebook said it has identified a new coordinated political influence campaign to mislead its users and sow dissension among voters ahead of November’s US congressional elections.

Many Southeast Asian countries have been unsure of US economic policy towards the region since President Donald Trump won a 2016 election promising to put “America First”.

One of Trump’s early acts in office was to pull out of the Trans-Pacific Partnership (TPP) trade agreement, which involved four Southeast Asian states.

The US Secretary of State Mike Pompeo is due in Singapore on Friday fresh from unveiling an investment pitch for the region, although many Asean members could be more concerned with a US-China trade that threatens to jolt their economies.

Asean is set to pledge its commitment to a major trade deal that includes China – the Regional Comprehensive Economic Partnership – saying it will form a “centrepiece of its external economic relations, particularly at a time of growing uncertainties in global trade.”

Singapore’s prime minister said on Thursday the deal would create the world’s largest trading bloc, covering a third of the global economy.

Asean is also set to urge steps for “the complete, verifiable, irreversible denuclearisation” of the Korean peninsula, saying it welcomed a pact between the United States and North Korea at June’s landmark summit in Singapore.

Speaking on the event sidelines on Thursday, China’s Wang Yi called for a push to establish a peace mechanism as well as denuclearisation.

China, along with North Korea and the United States, is a signatory to the armistice that concluded the 1950-53 Korean War, rather than a peace treaty.

The United States has said it will press Southeast Asia to keep up sanctions on Pyongyang during the meetings.

That follows reports of renewed activity at the factory that produced North Korea’s first intercontinental ballistic missiles capable of reaching the United States.