As Republicans shun vaccines, Congress toils to return to normal 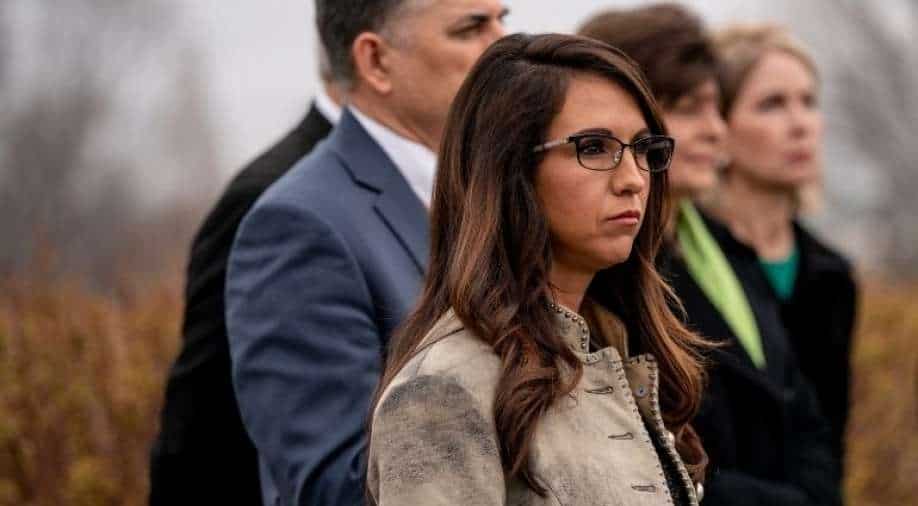 Rep. Lauren Boebert (R-Colo.), who has said it is 'not the proper role of government to force injections of any kind in anyone,' with other members of the Freedom Caucus on Capitol Hill in Washington. Photograph:( The New York Times )

Lawmakers who have continued to meet in person during the pandemic, often in violation of public health advice, have had access to the Pfizer vaccine since late December. But in the House, about 25% of lawmakers have not received a vaccination, the top Republican wrote this week to Speaker Nancy Pelosi, citing data from the Office of the Attending Physician. It is unclear how many senators have been vaccinated, although a handful of Republicans have said they do not intend to get one

Even as Americans across the country hunt for a lifesaving shot in a bid to get back to a semblance of pre-pandemic normalcy, more than a quarter of members of Congress, just a phone call away from receiving a coronavirus vaccine, have turned it down.

Lawmakers who have continued to meet in person during the pandemic, often in violation of public health advice, have had access to the Pfizer vaccine since late December. But in the House, about 25% of lawmakers have not received a vaccination, the top Republican wrote this week to Speaker Nancy Pelosi, citing data from the Office of the Attending Physician. It is unclear how many senators have been vaccinated, although a handful of Republicans have said they do not intend to get one.

The hesitance around receiving the vaccine mirrors a broader trend across the United States, where there are differing degrees of opposition to being inoculated against the coronavirus, but polling suggests that Republicans are far more skeptical. Because vaccinations are confidential health information, there is no breakdown of which lawmakers have received one or what their party affiliations are. But in recent weeks, several Republicans have publicly rejected the idea of being vaccinated.

Sen. Rand Paul, R-Ky., a former ophthalmologist, said he was “going with the science on this one” in refusing a vaccine.

“I have not chosen to be vaccinated because I got it naturally,” Paul, who tested positive for the virus last March, recently told reporters. (The science says the opposite; the Centers for Disease Control and Prevention recommends that people get vaccinated even if they have already had the coronavirus.)

“I had COVID,” said Sen. Ron Johnson, R-Wis. “I think that probably provides me the best immunity possible actually having the disease.”

The reluctance is just the latest barrier that Congress is confronting as leaders consider how to begin reinstating a sense of normalcy on Capitol Hill, where partisanship has become inextricably tied to health decisions and offices amount to their own fiefs, each with their own rules and perceptions of risk. It is emerging at a time when many aides on Capitol Hill — some of whom work for lawmakers who expect them to show up in person to the office — are themselves struggling to find a vaccine dose amid uneven policies about who should get one.

Pelosi, D-Calif., told reporters Friday that the House should be aiming for “100%” of members to be vaccinated but lamented that she could not force anyone to accept a shot. If Republicans refused, she said, it would simply take longer to get the House back to normal, as members of that party have been pushing to do.

“You can’t tell anybody to do anything, least of all around here,” Pelosi said. “The more people who get vaccinated, the shorter time we have to stay separated on the floor.”

Lawmakers appear to have varying rationales for declining the vaccine, with some in both parties feeling uneasy about obtaining one at a time when many of their constituents are unable to do so. But Republicans have been particularly vocal in expressing misgivings about the vaccine and other virus precautions.

Rep. Lauren Boebert of Colorado, a first-term Republican who has styled herself in former President Donald Trump’s image and proudly carries her pistol through the halls of Congress, has said it is “not the proper role of government to force injections of any kind in anyone.”

On Thursday, Sen. Roger Marshall, R-Kan., a former obstetrician-gynecologist, stood maskless in the Senate basement and read Dr. Seuss’ “One Fish, Two Fish, Red Fish, Blue Fish” aloud in an apparent attempt to call attention to his argument that people who have been vaccinated should not have to wear masks.

His choice of children’s book also reflected how many Republicans have taken to deriding coronavirus precautions as part of what they call liberal hysteria run amok. Marshall appeared to be tying them to a recent decision by author Theodor Geisel’s estate to stop selling works he wrote that include racist material, which conservatives complained was a symptom of “cancel culture.”

Sen. Mike Lee, R-Utah, who tested positive for the coronavirus in October, has taken to wearing a mesh mask to demonstrate his disdain for the safety measure.

Some Democrats and Republicans have publicly and privately said they were uncomfortable about the optics of getting vaccinated before their constituents could and would refrain from it until access was more widespread.

Rep. Ilhan Omar, D-Minn., argued on Twitter that lawmakers “are not more important” than teachers and other front-line workers and should not be able to skip the line.

Sen. Marco Rubio, R-Fla., became an unwitting example of the political downside of accepting the shot after he posted a photograph on Twitter of himself getting one in December, a move intended to bolster public confidence in the vaccine. Instead, critics on Twitter piled on, accusing him of playing down the threat of the virus only to rush to protect himself before others had the chance.

“There were some genuine internal struggles by some members of Congress who had the vaccination,” said Rep. Raul Ruiz, D-Calif., an emergency medicine physician. “Guilt of being vaccinated when others in their district weren’t able to get vaccinated.”

Even ensuring that lawmakers’ aides have access to the vaccine has been a charged proposition. Members of Congress were initially told that only two staff members from each office could receive the jab, setting off an uncomfortable round of actuarial calculations and decisions.

One office sent around a Google document to gauge interest; others wrestled with whether to prioritize vaccinating lower-level aides who had been working from home but had health conditions that made them more vulnerable to the virus, or more senior aides who wanted to come in to the office.

This week, the Capitol physician announced a significant expansion of vaccine availability, saying that each member’s office would be able to obtain shots for six aides. That prompted a flood of calls from hopeful congressional staff members, with multiple aides reporting listening to hold music — a medley of “The Star-Spangled Banner” and “Hail to the Chief” on repeat — for one to two hours as they waited to schedule their appointments.

The scattershot approach reflects the lack of consistent procedures for protecting Congress from the coronavirus, a challenge that has persisted throughout the pandemic. While Democratic leaders in the House have imposed a series of strict guidelines governing the use of masks on the floor and have pivoted to proxy voting and remote hearings, there are no requirements for how each office should function.

But congressional offices have largely patched together a case-by-case set of rules guiding their transitions back to work. While many Republican offices have brought staff back, Democratic offices have largely maintained skeleton crews, and some aides returning to the Capitol complex said they were appalled to see staff from neighboring offices walking through the halls without masks.

House Republicans, who have been impatient to return to work as normal, argue that because lawmakers have been granted the special dispensations afforded to essential workers, they should be required to show up to perform their jobs in person.

They have been particularly alarmed by what they see as bipartisan abuse of telework that they fear could become the new status quo. Lawmakers in recent weeks have appeared remotely during hearings from trains, boats and, in one case, an automobile they were operating on what appeared to be a freeway; a group of Republicans used proxy voting to cast their votes from the Conservative Political Action Conference in Florida.

Rep. Steve Scalise of Louisiana, the No. 2 House Republican, said that the report that 75% of all House members had been vaccinated was an argument for a return to normalcy and that “there is a strong desire to get back to a regular schedule here on the floor.”

Democratic leaders are not so convinced. Rep. Steny Hoyer of Maryland, the No. 2 House Democrat, told reporters this week that leaders wanted to be careful not to “put the cart before the horse” and return to normal operations before it was fully safe. He pointed to variants of the virus spreading around the world and suggested that even if most lawmakers were vaccinated, they could still pose a risk to the thousands of staff who work in the Capitol complex who may not be.

“At some point in time, it will come to an end, but I don’t know the timeline and I don’t think anyone knows the timeline,” Hoyer said. “What we don’t want to risk is that happening, a third sort of surge of the virus and its mutations, its variants.”

Marissa Baker, a professor at the University of Washington’s public health school who specializes in occupational health, said that Congress was a particularly difficult workplace to protect because of the large number of in-person interactions across the nation that constitute lawmakers’ routines.

“It’s not really a light switch where we can pretend it's 2019 again,” Baker said. “It needs to be considered more as a gradual return to baseline.”

Ruiz said a “hybrid model” would most likely persist for some time.

“We’re not going to be back to normal, where we’re taking public meetings in our office, where people are touring the Capitol — like the hustle and bustle of Capitol Hill was prior to the pandemic — for a very long time,” he said.