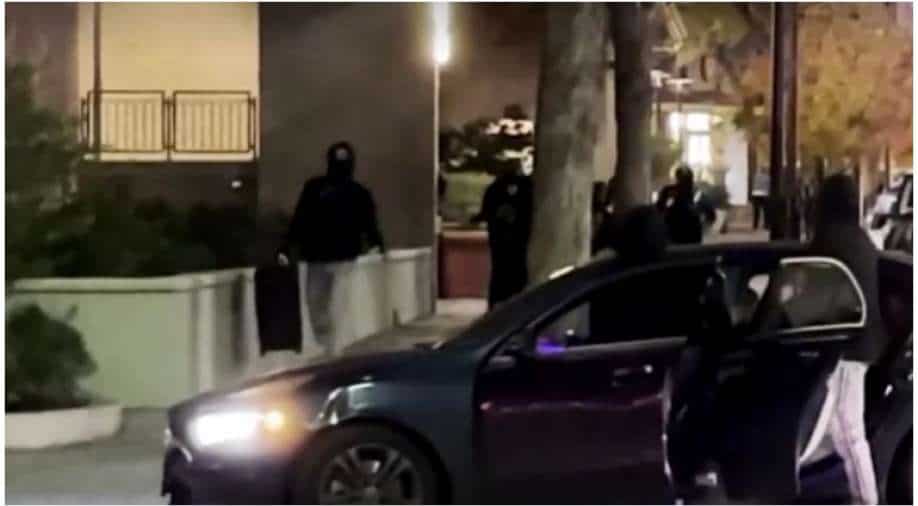 Members of such a flash mob can be seen carrying what are believed as stolen goods from high-end stores Photograph:( Reuters )

US retailers and luxury shop owners are adding security as spate of flash mob robberies have left such establishments stunned especially in San Francisco and beyond. That these robberies would take place just as festive season of Christmas approaches has become an issue of concern.

In the most shocking of recent thefts, around 80 masked people in 25 cars raided a high-end Nordstrom department store in Walnut Creek, California east of San Francisco on Saturday, plundering its first-floor luxury goods counters in just a few minutes before fleeing.

That took place one day after 40 people drove up and swarmed a Louis Vuitton store in San Francisco's Union Square, emptying its shelves in seconds before jumping in cars to speed away.

Areas around Chicago are hit by such robberies as well. A gang of 14 crooks swept into a Louis Vuitton store in the Oak Brook suburb, snatching more than $100,000 worth of luxury bags and garments. It was the third such attack on a Chicago-area Vuitton outlet in a month.

Retailers around the country are taking notice and precautions against possible copycat hits as the sheer size of the robbery gangs and their ability to plan secretly have made them nearly impossible to halt.

"Businesses and customers should feel safe while doing their holiday shopping."

Thursday is Thanksgiving, and the day after the holiday has been nicknamed "Black Friday," the traditional kickoff to America's frenzied Christmas shopping season.