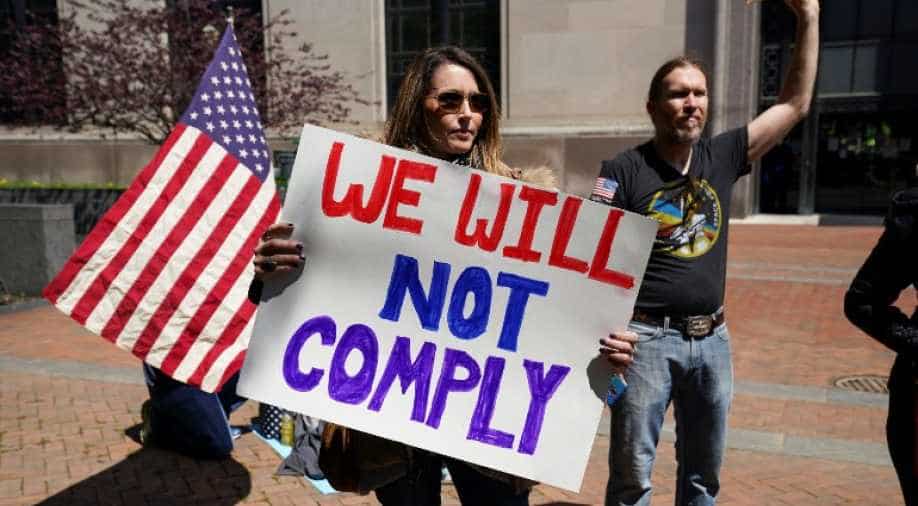 Protesters holding placard in the US Photograph:( Reuters )

In the United States, thousands have given social distancing norms a yellow slip to come out on the streets and protest. With unemployment numbers on the rise, Americans are demanding that they be allowed to return to work.

Also Read: The race to the White House is now 'China-centric'

They are not the only ones out of their homes. Another set of Americans have taken to the streets to protest the government inaction. The country with the world's largest number of coronavirus cases has an overstretched healthcare system right now and the world's highest death toll.

The United States is the worst hit by the Wuhan virus but thousands of Americans are unconvinced of its severity. They are demanding an end to the lockdowns.

0ver 2,000 people took to the streets of Washington. The mask-less protesters hit out at democratic governor Jay Inslee's stay at home order. Several dozen protesters gathered in California too. Some demanded the right walk and surf with woman holding sign saying "we have the right to walk & surf".

Similar scenes were witnessed in Wisconsin too where the stay home orders have been extended till May 26. In Virginia, protesters questioned government numbers.

Demonstrators in Texas ruled out the need for a vaccine. Forty-two of 50 American states have issued stay at home orders. Twenty-two million Americans filed for unemployment benefits in the last one month. People are struggling to make ends meet.

The frustration of these protesters is justified. Their demands, however, aren't. Can America afford to re-open?  What do the guidelines say?

The Trump administration recommends 14 straight days of decline in cases for a state to start easing restrictions. What's the status now? The graph is rising everywhere, Boston and Chicago are emerging as hotspots.

What do experts recommend?

Extensive testing. US President Donald Trump wants the world to believe that American states have plenty of tests. From Maryland to Virginia, the federal governors disagree.

The White House clearly isn't doing enough. Americans are protesting Trump's inaction. Fake body bags were placed outside Trump's buildings over the weekend. Demonstrators highlighted how every American is at risk.

These are two sides of the American coin. Which side represents the majority? Most Americans disagree with those protesting against stay-at-home.

The number is two-to-one. Most Americans are concerned about ending lockdowns according to a Pew survey.