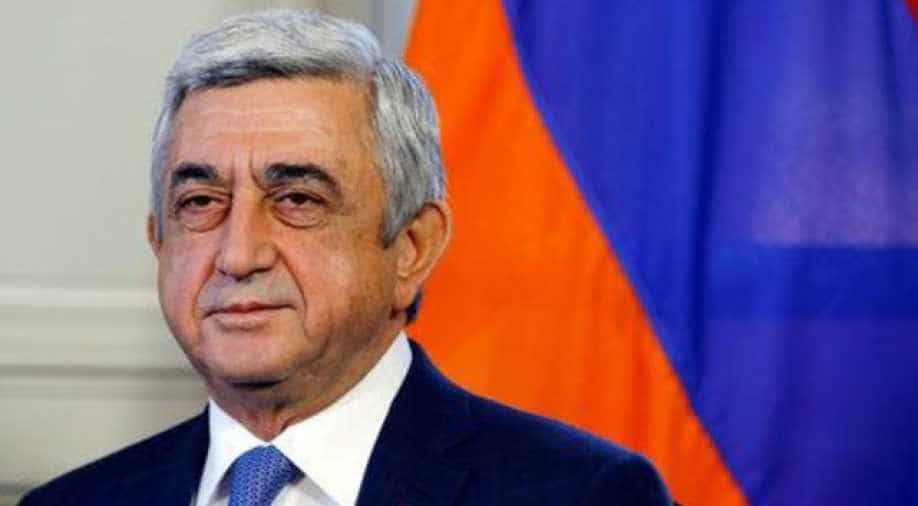 Sarksyan, a close ally of Russian President Vladimir Putin, had served as Armenia's president for a decade until this month and had faced accusations of clinging to power when parliament elected him as prime minister last week.

Under a revised constitution, the prime minister now holds most power in the tiny southern Caucasus nation, while the presidency has become largely ceremonial.

Pressure on the 63-year-old to quit had increased sharply on Monday when unarmed soldiers in the capital Yerevan joined the anti-government protests, which first erupted on April 13.

Though peaceful, the tumult has threatened to destabilise Armenia, a key Russian ally in a volatile region riven by its decades-long, low-level conflict with Azerbaijan. Moscow, which has two military bases in Armenia, was closely watching events.

"I got it wrong," Sarksyan said in a statement issued by his office.

"In the current situation there are several solutions, but I won't choose any of them. It's not my style. I am quitting the country's leadership and the post of prime minister of Armenia."

He said he was bowing to protesters' demands and wanted his country to remain peaceful.

Armenia's political parties in parliament now have seven days to put forward the name of a new prime minister. Sarksyan's allies remain in key positions in the government and it remains unclear whether his resignation will herald any real change. Protesters loudly celebrated Sarksyan's resignation.

Some hugged policemen in the street amid repeated cries of "Hurrah!", others beeped car horns, and some residents of Yerevan were even seen dancing outside.

The protests which toppled Sarksyan lasted for 11 days and saw tens of thousands of protesters march through Yerevan and other towns, blocking streets and staging sit-ins that disrupted daily life.

On Sunday police had detained three opposition leaders and nearly 200 protesters, drawing a rebuke from the European Union. Police released Nikol Pashinyan, a lawmaker regarded as the main opposition leader, on Monday.

Asked about the crisis on Monday before Sarksyan's resignation, the Kremlin called Armenia an "extraordinarily important country" for Russia, but dismissed the idea it might intervene, calling the crisis a domestic matter.

Last week Putin rang Sarksyan to congratulate him on becoming premier. As president, Sarksyan took Armenia, a country of about three million people, into a Russia-backed economic bloc and bought weapons from Moscow.

The protesters' complaints were mainly domestic and focussed on pervasive corruption and poverty in a country that won independence from Moscow in 1991 but has been hampered by its conflict with Azerbaijan over the breakaway region of Nagorno-Karabakh and other issues.

But critics have also accused Sarkasyan of moving landlocked Armenia too close to Russia at the expense of better ties with the West and increased prosperity, and it was unclear whether his political demise could lead to a change in foreign policy.

In what may have been a turning point in the protests, soldiers wearing military uniforms marched through Yerevan on Monday morning with the protesters.

Images broadcast on the internet and social media showed the soldiers hugging protesters and waving the country's national flag, in a development the Armenian Defence Ministry condemned as illegal and promised to harshly punish.

Opposition leader Pashinyan had told Sarkasyan that his time was up in a tense meeting on Sunday.

"The situation in Armenia has changed, you don't have the power of which you are told," he had told him. "In Armenia, the power has passed to the people."