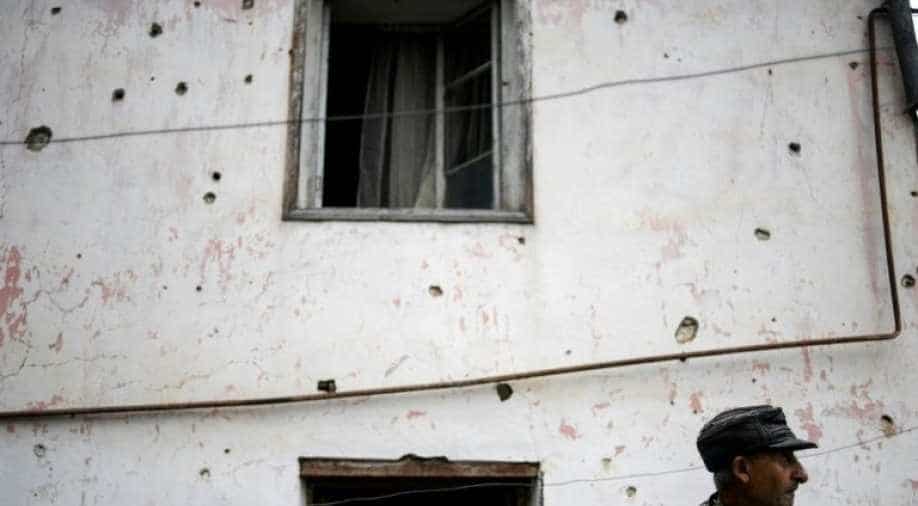 Armenian and Azerbaijani forces have intensified their shelling as French President Emmanuel Macron said jihadist militants had been deployed to Nagorny Karabakh in a "serious" new development.

In a joint appeal on Thursday, Russian President Vladimir Putin, US President Donald Trump and Macron urged the two sides to return to negotiations aimed at resolving their longstanding territorial dispute.

Armenian Prime Minister Nikol Pashinyan and Azerbaijani leader Ilham Aliyev have both rejected the idea of holding talks, with the Armenian leader stating: "Nagorno-Karabakh cannot disarm, because it would lead to genocide."

But Russia suggested it was making progress in diplomatic efforts with Turkey, a firm supporter of Azerbaijan in the conflict.

It said Foreign Minister Sergei Lavrov and Turkish counterpart Mevlut Cavusoglu had confirmed they were ready for "close coordination" to stabilise the situation.

In Martuni, a small town in Karabakh around 25 kilometres (15 miles) from the front line, residents took refuge in cellars as heavy shelling by Azerbaijan killed four civilians and wounded 11.

Artak Aloyan, a 54-year-old construction worker sheltering in his basement with an elderly neighbour, vowed to stay despite the worst clashes the contested region has seen for years.

"I built this house with my own hands. I will not go anywhere, that's that," he told AFP after a rocket attack. "I will die here in the last battle."

The rival Caucasus nations have been locked in a bitter stalemate over Karabakh since the collapse of the Soviet Union when the ethnic Armenian region broke away from Azerbaijan.

In the fiercest clashes in years, 136 people have been confirmed dead in fighting that has raged for five days.

The Armenian defence ministry said fighting had intensified and its troops had repelled Azerbaijani attacks, downing helicopters and destroying drones and armoured vehicles.

It said Azerbaijani forces had fired on two villages inside Armenia, close to Karabakh, killing one civilian.

Armenian Deputy Prime Minister Tigran Avinyan said that 1,280 Azerbaijani troops had been killed and 2,700 wounded since Sunday, with both sides making claims of inflicting heavy casualties.

Azerbaijan's defence ministry said its forces had carried out "crushing artillery strikes" on Armenian troops. It denied claims that one of its helicopters was shot down and had crashed in Iran.

The two sides have accused each other of shelling civilian areas and ignored repeated calls from international leaders to halt the fighting.

Putin, Macron and Trump called for an "immediate cessation of hostilities" and urged the warring sides to commit to talks.

Yerevan is in a military alliance of ex-Soviet countries led by Moscow and has accused Turkey of dispatching mercenaries from northern Syria to bolster Azerbaijan's forces in the Karabakh conflict.

It also claimed earlier this week that a Turkish F-16 fighter jet flying in support of Baku's forces had downed an Armenian SU-25 warplane, but Ankara and Baku denied the claim.

Pashinyan reiterated claims that mercenaries had joined the conflict, saying Azerbaijan and Turkey were fighting "with the help and involvement of foreign terrorist fighters".

"This terrorism equally threatens the United States, Iran, Russia, and France," he added.

His calls were echoed by Macron, who earlier said intelligence reports had established that 300 Syrian fighters drawn from "jihadist groups" from the Syrian city of Aleppo had passed through Turkey en route for Azerbaijan.

The French president said that a "red line has been crossed, which is unacceptable" and demanded an explanation from Ankara.

Armenia has recorded the deaths of 104 soldiers and 13 civilians. Azerbaijan has not reported any military casualties but said 19 civilians were killed after Armenian shelling.

Karabakh's declaration of independence from Azerbaijan sparked a war in the early 1990s that claimed 30,000 lives, but it is still not recognised as independent by any country, including Armenia.

Talks to resolve the conflict have largely stalled since a 1994 ceasefire agreement.