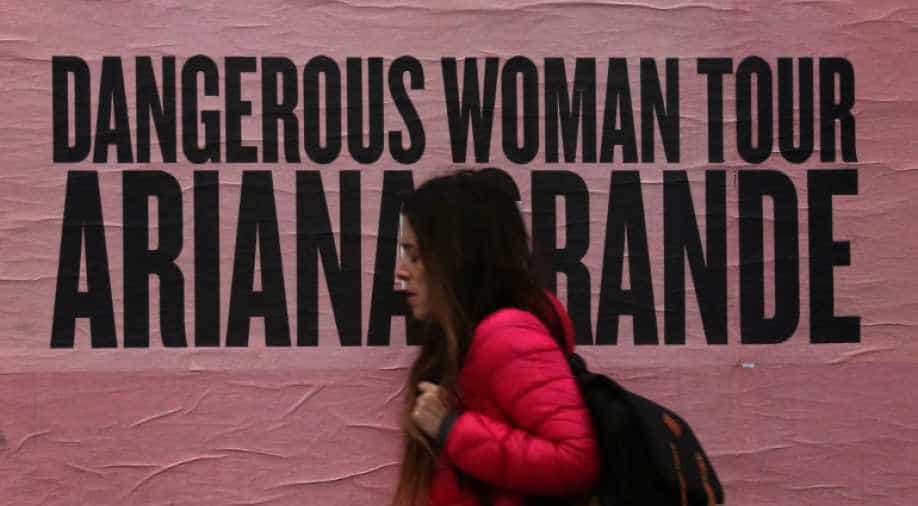 A woman walks past a billboard advertising US singer Ariana Grande's world tour in Buenos Aires, Argentina, May 24, 2017. Photograph:( Reuters )

Ariana Grande has called off two London concerts and five in Europe after a suicide bomber killed 22 people at her performance in Manchester, England, the US pop singer's representatives said on Wednesday.

Monday's bombing, which killed 22 people and wounded 64, also resulted in the cancellation of next week's London premiere of the superhero film "Wonder Woman" and increased security for a music festival this weekend featuring pop star Katy Perry in the northern English city of Hull.

Grande, 23, who tweeted earlier this week that she was "broken" by the Manchester attack, had been due to perform on Thursday and Friday at London's O2 arena as part of her "Dangerous Woman" tour.

Both shows have been cancelled, as well as performances in Belgium, Poland, Germany and Switzerland through June 5, her record label said in a statement.

"Due to the tragic events in Manchester the Dangerous Woman tour with Ariana Grande has been suspended until we can further assess the situation and pay our proper respects to those lost," the statement said. "Our way of life has once again been threatened but we will overcome this together."

Concert promoter Live Nation said ticket holders will get refunds. Grande, 23, was unharmed in the attack and was photographed arriving in Florida on Tuesday to be with family and friends.

British-born Salman Abedi, 22, blew himself up on Monday night at the packed Manchester Arena at the end of Grande's concert, attended by thousands of children and teenagers, killing 22 people and injuring 64.

Islamic State claimed responsibility, Britain's official terror alert was raised to "critical," and hundreds of soldiers were deployed on Wednesday to guard key London sites, including London's Houses of Parliament.

Hollywood studio Warner Brothers said on Wednesday it had called off the May 31 "Wonder Woman" red-carpet event in London "in light of the current situation".

Organisers of Radio 1's Big Weekend music festival, slated this weekend in Hull, a hundred miles (160 kilometres) east of Manchester, said those attending would have to go through two rounds of searches.

US rock group Blondie cancelled a London performance scheduled a day after the attack, while British band Take That postponed shows at the Manchester Arena and in Liverpool this week.

The cancellation of Grande's concerts came as a disappointment to some fans of the former Nickelodeon cable TV star, who is known for upbeat pop tracks such as "Problem" and "Break Free".

Annalise Gandy, 22, paid 36 pounds ($47) for front-row seats at Grande's Friday concert in London. She said that while the attack was "absolutely terrifying," she still wanted to attend.

"I would go not only because I paid for those tickets, but because a concert is where people let themselves go and have fun," Gandy, who lives in London, said in a telephone interview. "I’m not going to live in fear."