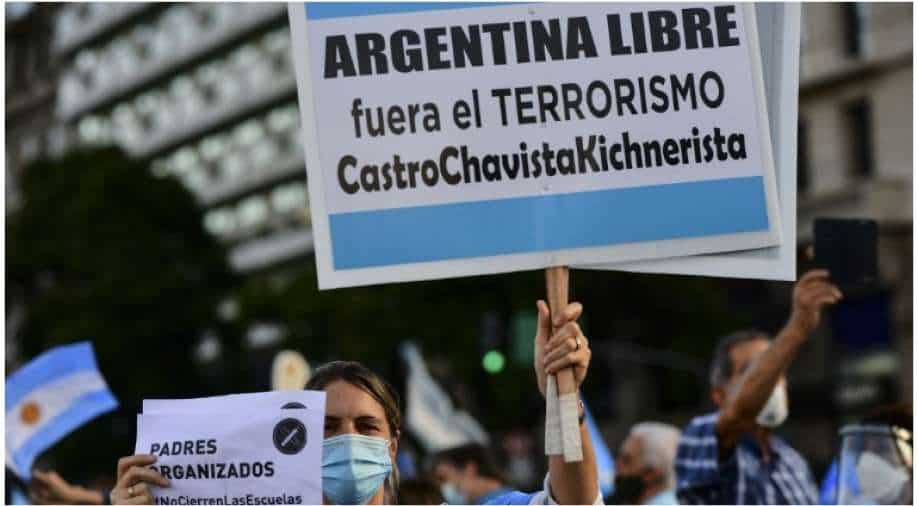 A woman takes part in a protest against Argentine President Alberto Fernandez and the new restrictions to mitigate the spread of the novel coronavirus, at 9 de Julio Avenue in Buenos Aires, on April 17, 2021 Photograph:( AFP )

Starting from Friday (April 16) and set to run to the end of the month, the new measures see an effective curfew after 8pm, indoor activities banned in public spaces, and schools closed

Argentines took to the streets of Buenos Aires on Saturday (April 17) to protest new lockdown measures brought back this week as daily COVID-19 cases surged to record highs.

Starting from Friday (April 16) and set to run to the end of the month, the new measures see an effective curfew after 8pm, indoor activities banned in public spaces, and schools closed.

When the coronavirus first appeared in South America last year, Argentina brought in a strict lockdown that initially kept a lid on cases but choked an already ailing economy in recession for the past three years.

Cases ended up rising regardless as many Argentines were forced out of doors to make a living as poverty rates shot up to 42 percent by the end of the year.

The restrictions have already sparked a battle between the federal government of centre-left President Alberto Fernandez and Buenos Aires' city mayor who strongly opposes the school shutdown and has said he was not consulted on the measures.

Fernandez says the country needs to gain time in the battle against the virus after daily cases hit a record 27,000 earlier this week. The South American country has recorded over 2.6 million cases and is nearing 59,000 deaths.