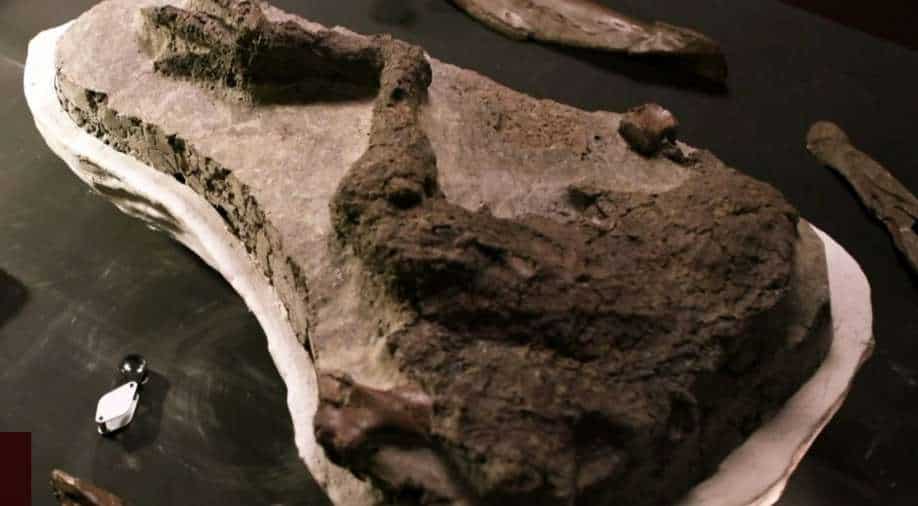 The British archaeologists, who have been working at the site, believe that it was killed and entombed around 66 million years ago when the asteroid rained down on the Earth, bringing an end to the era of dinosaurs

Scientists claimed to have found a well-preserved fossil of a dinosaur leg touted to be from the time asteroid hit the Earth.

The limb of Thescelosaurus, covered with skin, was found at a fossil site in Tanis, North Dakota, 3,000kms away from the asteroid impact site in the Gulf of Mexico.

The British archaeologists, who have been working at the site, believe that it was killed and entombed around 66 million years ago when the asteroid rained down on the Earth, bringing an end to the era of dinosaurs.

The dig has been filmed for a BBC documentary Dinosaurs: The Final Day with Sir David Attenborough, who will review the fossil finds.

"It's a Thescelosaurus. It's from a group that we didn't have any previous record of what its skin looked like, and it shows very conclusively that these animals were very scaly, like lizards. They weren't feathered like their meat-eating contemporaries,” Prof Paul Barrett, a world-leading expert on herbivorous dinosaurs from London's Natural History Museum, told the BBC.

"This looks like an animal whose leg has simply been ripped off really quickly. There's no evidence on the leg of disease, there are no obvious pathologies, there's no trace of the leg being scavenged, such as bite marks or bits of it that are missing."

"So, the best idea that we have is that this is an animal that died more or less instantaneously."

The archaeologists also claimed to have discovered the fossilised remains of fish that breathed in debris from the asteroid.

Apart from that, the team also dug out a fossil turtle that was skewered by a wooden stake; the remains of small mammals and the burrows they made; skin from a horned triceratops; the embryo of a flying pterosaur inside its egg; and what appears to be a fragment from the asteroid impactor itself.