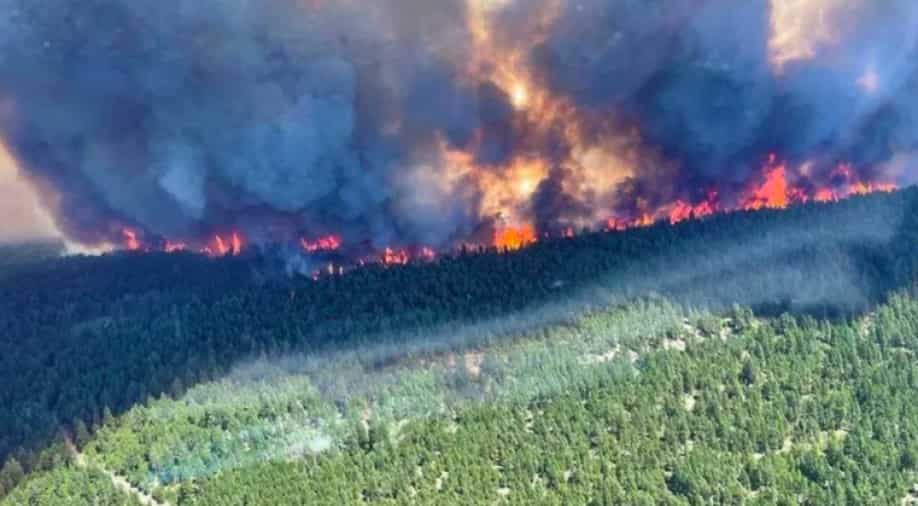 The town of Lytton, 250 kilometres (155 miles) northeast of Vancouver, "has sustained structural damage and 90 per cent of the village is burned, including the centre of town," local MP Brad Vis said.

About 1,000 people were evacuated in western Canada, authorities said Thursday, as fires raged amid an unprecedented heatwave, charring most of at least one town.

The province of British Columbia has recorded 62 new fires in the past 24 hours, premier John Horgan told a press conference.

"I cannot stress enough how extreme the fire risk is at this time in almost every part of British Columbia," Horgan said.

The town of Lytton, 250 kilometres (155 miles) northeast of Vancouver, "has sustained structural damage and 90 per cent of the village is burned, including the centre of town," local MP Brad Vis said.

The village's 250 residents were evacuated on Wednesday evening, one day after it set a jaw-dropping Canadian record high temperature of 49.6 degrees Celsius (121 degrees Fahrenheit).

The evacuation order was extended Wednesday night to residents of about 100 properties north of Lytton.

"The last 24 hours have been devastating for Lytton residents," Defence Minister Harjit Sajjan wrote on Twitter, adding that the Canadian armed forces "are ready to support residents as we move forward in the next steps."

Provincial authorities have not yet announced any injuries or death related to the fires, a number of which were also clustered north of the city of Kamloops, located some 150 kilometres northeast of Lytton.

Early Thursday evening, British Columbia fire authorities said the unprecedented hot and dry conditions had led them to expect another difficult day ahead.

Environment Canada said in a bulletin issued early Thursday morning for Prince George, BC area that "an exceptionally strong ridge of high pressure over British Columbia will continue to bring record-breaking temperatures over the next couple of days."

"The duration of this heatwave is concerning as there is little relief at night with elevated overnight temperatures," it added.

The heatwave continued to move eastward on Thursday into the central Canadian prairies.

In addition to British Columbia, heatwave warnings have been issued for the provinces of Alberta, Saskatchewan, Manitoba, and parts of the Northwest Territories, and now northern Ontario.

In addition to Western Canada, the US states of Washington and Oregon, across the border, have also been sweltering under record temperatures this week and several hundred sudden deaths have been reported.