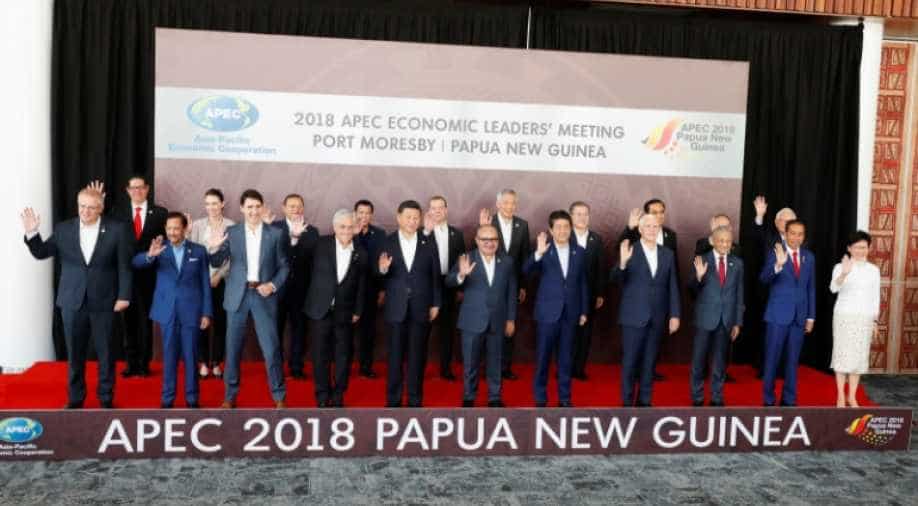 Leaders pose for a family photo ahead of the retreat session during the APEC Summit in Port Moresby, Papua New Guinea. Photograph:( Reuters )

US President Donald Trump did not attend the meeting and nor did his Russian counterpart, Vladimir Putin.

Asia-Pacific leaders failed to agree on a communique at a summit in Papua New Guinea on Sunday for the first time in their history as deep divisions between the United States and China over trade and investment stymied cooperation.

"You know the two big giants in the room," Papua New Guinea (PNG) Prime Minister Peter O`Neill said at a closing news conference, when asked which of the 21 members of the Asia-Pacific Economic Cooperation (APEC) group could not agree.

O'Neill, who was chairman of the meeting, said the sticking point was over whether mention of the World Trade Organization and its possible reform should be in the Leaders' Declaration.

The multilateral trade order that APEC was established in 1989 to protect is crumbling as Chinese assertiveness in the Pacific and US tariffs strain relations in the region and divide loyalties.

A Leaders' Declaration has been issued after every annual APEC leaders` meeting since the first in 1993, the group`s website shows.

O'Neill said that as APEC host, he would release a Chairman`s Statement, though it was not clear when.

US President Donald Trump did not attend the meeting and nor did his Russian counterpart, Vladimir Putin.

US Vice President Mike Pence attended instead of Trump.

Chinese President Xi Jinping arrived to great fanfare on Thursday and was feted by PNG officials. He stoked Western concern on Friday when he met Pacific island leaders to pitch his Belt and Road initiative.

The United States and its allies, Japan, Australia and New Zealand, countered on Sunday with a $1.7 billion plan to deliver reliable electricity and the internet to PNG.

Wang Xiaolong, a senior economic official with China`s APEC delegation, said of the failure to agree on a joint statement that it was "not exactly a sticking point between any particular two countries".

Most members affirmed their commitment to preserving the multilateral trading system and supported a robust and well-functioning WTO, he said.

"Frankly speaking, we are in a very early stage of those discussions and different countries have different ideas as to how to take that process forward," Wang said.

One diplomat involved in the negotiations said tension between the US and China, bubbling all week, erupted when the Chinese government`s top diplomat, Wang Yi, objected during a leaders` retreat to two paragraphs in a draft document seen by Reuters.

One mentioned opposing "unfair trade practices" and reforming the WTO, while another concerned sustainable development.

"These two countries were pushing each other so much that the chair couldn`t see an option to bridge them," said the diplomat, speaking on condition of anonymity.

"China was angered that the reference to WTO blamed a country for unfair trade practices."

Pence said in a blunt speech on Saturday there would be no end to US tariffs on $250 billion of Chinese goods until China changed its ways. On Sunday, as he left the PNG capital of Port Moresby, he listed US differences with China.

"They begin with trade practices, with tariffs and quotas, forced technology transfers, the theft of intellectual property. It goes beyond that to freedom of navigation in the seas, concerns about human rights," Pence told reporters.

Pence also took direct aim at Xi`s signature Belt and Road initiative, saying in his speech countries should not accept debt that compromised their sovereignty.

"We do not offer a constricting belt or a one-way road," he said.

The Belt and Road plan was first proposed in 2013 to expand land and sea links between Asia, Africa and Europe, with billions of dollars in infrastructure investment from China.

APEC host PNG is home to 8 million people, four-fifths of whom live outside urban areas and with poor infrastructure, and found itself feted by superpowers.

Xi opened a Beijing-funded boulevard, while Pence talked of a 400-year old King James Bible in the PNG parliament that he had played a role in bringing to the country.

Australia, a staunch US ally, has for decades enjoyed largely unrivalled influence among Pacific island nations. China has recently turned its attention to the region with a raft of bilateral financing agreements to often distressed economies.