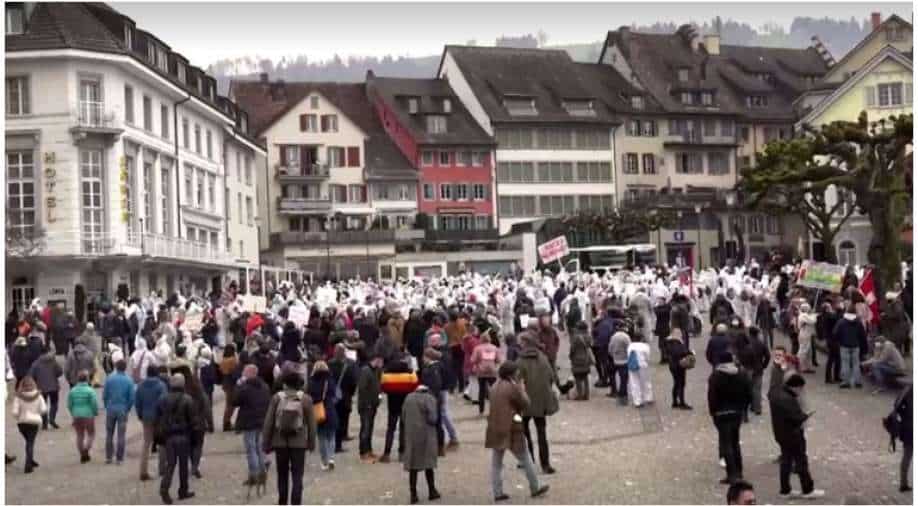 Citizens are growing tired of necessary by inconvenient coronavirus restrictions

Anti-lockdown protests and demonstrations have continued in some European countries as citizens grew tired of necessary by inconvenient coronavirus restrictions. While this is the case in some countries, others are witnessing bad weather forcing citizens to stay at home. Here's a look at situation

Hundreds of people took to the streets of Copenhagen on Saturday night to protest Denmark's Covid-19 restrictions and the country's plans for a digital vaccination certificate.
Organised by a group calling itself "Men in Black Denmark," some 600 people gathered in the bitter cold in front of the parliament building to protest the "dictatorship" of Denmark's partial lockdown.

Main target of people's anger was plan for digital vaccine "passport". Denmark is planning to develop a digital certificate of COVID-19 vaccination for travel.

It could also potentially be used for sports and cultural events as well as restaurants.

Protest organisers say such a passport implies an obligation to be vaccinated and amounts to a further restriction on individual freedom. Vaccination is not compulsory in Denmark.

Demonstrators, including some wearing hoods, marched with torches in the centre of the Danish capital, chanting "we have had enough" and "freedom for Denmark."

Some 500 protesters marched through the Swiss tax haven of Zug on Saturday (February 6), wearing white protective suits and chanting dystopian slogans to voice displeasure with rules aimed at limiting the spread of the COVID-19 pandemic.

The demonstration was reminiscent of Vienna rally where thousands faced-off against police and opposed country's even-stricter lockdown.

Though Switzerland's restrictions have been less severe than those in Germany, Austria or Italy -- restaurants and non-essential shops are closed but ski areas are open -- there is still a steady buzz of opposition.

In Zug, police watched but did not intervene as a group of protesters filed from the train station to the centre of the lakeside city known for shell companies with letter-box addresses and attractive tax rates.

The Netherlands was set to enter an even stricter lockdown as forecasts of heavy snow and strong winds on Sunday triggered the country`s first nationwide weather alert in nine years.

The government on Saturday issued a plea for citizens to stay at home as national weather institute KNMI issued a "code red" for the entire country, warning that icy winds of up to 90 km (56 miles) per hour and up to 20 centimetres (8 inches) of snow could lead to hazardous snowdrifts on roads and limited visibility.

All coronavirus testing facilities will be closed on Sunday, health authorities said, while train services will be cut to a minimum level and major supermarkets cancelled deliveries after deciding it would be too dangerous to send drivers out.