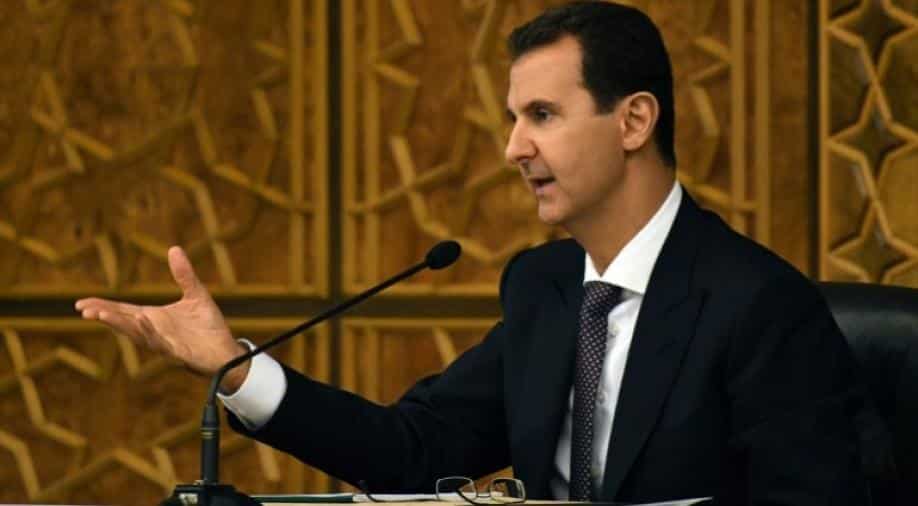 In the early hours of Tuesday, anti-Assad fighters pulled back from Khan Sheikun and the countryside to its south, the Britain-based Syrian Observatory for Human Rights said.

Jihadists and allied rebels withdrew from a key area of northwestern Syria Tuesday as President Bashar al-Assad's forces pressed an offensive against the jihadist-run Idlib region, a war monitor said.

The town of Khan Sheikhun on the region's southern edge has been a key goal for the government as it lies on the main highway through Idlib province connecting the capital Damascus with second city Aleppo.

After eight years of civil war, the Idlib region on the border with Turkey is the last major stronghold of opposition to the Russia-backed Damascus government.

Since January, it has been administered by the Hayat Tahrir al-Sham alliance, which is led by jihadists from Syria's former Al-Qaeda affiliate.

The region of some three million people was supposed to be protected by a buffer zone deal signed last year by Moscow and rebel backer Ankara, but the government and Russian forces have subjected it to heavy bombardment since late April, killing more than 860 civilians.

And in recent weeks, regime forces have inched forward, nibbling away at the southern edges of the bastion.

In the early hours of Tuesday, anti-Assad fighters pulled back from Khan Sheikun and the countryside to its south, the Britain-based Syrian Observatory for Human Rights said.

The withdrawal means an important Turkish observation point in the nearby town of Morek, as well as a string of surrounding villages, are effectively surrounded by government forces, Observatory chief Rami Abdel Rahman told AFP.

All roads leading out of the area are either controlled by government forces or within range of their guns, he said.

But an HTS spokesman denied its forces had withdrawn from the countryside around Morek, saying they had regrouped in the south of Khan Sheikhun after heavy bombardment.

Khan Sheikhun -- which has been emptied of its residents in the face of the air strikes and shelling of recent months -- lies on the main Damascus-Aleppo highway, which has long been a key government objective.

On Monday, a Turkish military convoy of around 50 armoured vehicles crossed the border into Idlib and headed south along the highway.

The deployment drew condemnation from Damascus while Ankara alleged an airstrike had targeted its troops.

The convoy was at a standstill just north of Khan Sheikhun on Tuesday, after government forces cut the road on into the town.

An AFP correspondent said airstrikes and machine gunfire from government helicopters peppered the road leading north to the town of Maaret al-Noman on Tuesday.

"The Syrian army in its own way sent a clear message to the Turkish regime by forcing convoys sent by Ankara to help the terrorists in Khan Sheikhun to come to a halt," it said.

It was a "clear warning against any Turkish attempt to resuscitate the terrorists".

The war in Syria has killed more than 370,000 people and displaced millions since it started with the brutal repression of anti-government protests in 2011.

Successive rounds of UN-backed peace talks have failed to stem the bloodshed, and in recent years been overshadowed by a parallel negotiations track led by Russia and Turkey, dubbed the Astana process.

Under the September deal, Turkish troops were to monitor a planned buffer zone around Idlib after jihadists had withdrawn from it -- but the pullout failed to materialise.

Analyst Sam Heller said the government's latest advance had shown Turkish monitoring points might complicate its recapture of territory, but could not prevent it.

"It's not yet clear what Damascus and Moscow will do next," said the expert with the International Crisis Group think-tank.

It is unclear "if they will seize the opportunity to take more areas, or stop to consolidate their new positions and put some pressure on Ankara" to implement its side of the buffer zone deal, he told AFP.

Fellow analyst Samuel Ramani said the government's accusation of Turkish support for its opponents could provide a "pretext for further Syrian army incursions".

"It allows Damascus to make Turkey, not the Syrian army, appear like the chief violators of the deconfliction agreement," he told AFP.

But "for Russia, holding the Astana coalition together is a chief priority," he said.

Aid organisations have warned repeatedly that any large-scale government offensive to retake Idlib would spark one of the worst humanitarian crises of the war.