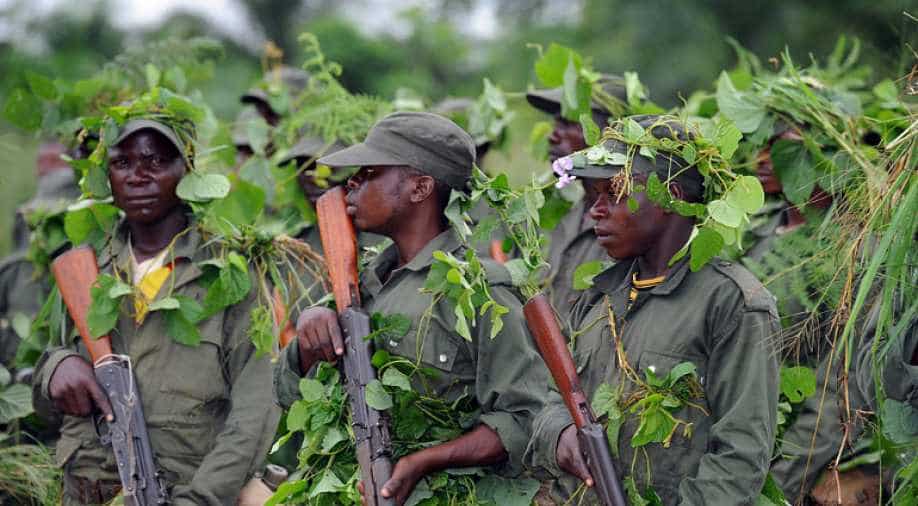 Representative Image: Congolese soldiers assigned to the Congolese Light Infantry Battalion wait for details of a training scenario at Camp Base in Kisangani, Congo. May 5, 2010. Image source: Wikimedia Commons via Sgt Jocelyn A Guthrie. Photograph:( Others )

Pomfret had its own public swimming pool, tennis courts and a large, well-stocked supermarket||The 90's political change swept away the white-minority government||Nelson Mandela's ANC party shattered the town's sheltered existence||By the 2000s, the government signalled its intention to close it down

Angolan soldiers recruited by South Africa's apartheid government to fight against their homeland now live in squalor, forgotten and unwanted.

Without healthcare, jobs or basic services, some 3,000 Angolan-born men call home the town of Pomfret in a far-flung northern corner of South Africa on the edge of the Kalahari Desert.

Dilapidated buildings crumble by the side of the town's sun-baked main road, water and power are cut off, and the asbestos factory that once sustained the region was abandoned long ago.

"We didn't fear anyone, we were the best unit in the world," he said in his shabby home, one of the few still standing in the town.

In the 1980s, while still living in Angola, he joined the apartheid-era unit that had been formed to fight communism across southern Africa, including in Namibia and Zambia.

It was a cause that meant taking up arms against his mother country, but Lourenco remembers that time with pride, saying he fought in a close-knit, professional unit that won great battlefield honours.

Souvenirs of those years cover the walls and a sniper rifle rests on his dining table "to hunt birds".

A television sits unused in the corner, covered in a white sheet -- a reminder that Pomfret is cut off from the rest of the rainbow nation.

"There was no apartheid in 32 Battalion. Where the whites drank, we drank, where the whites slept, we slept," said Lourenco as he gestured to the unit's uniform patches, emblazoned with a stylised black and white buffalo.

When the Cold War ended and as Pretoria ceased its shadowy regional wars against supposed communist threats, 32 Battalion was relocated to Pomfret with the promise that its members would be integrated into the regular South African army.

Life was initially good in the extreme northern outpost.

The town had its own public swimming pool, tennis courts and a large, well-stocked supermarket. Despite its remote location, the community functioned well.

"Here there was a club where the senior men partied. There was even a ballroom," said Makamba Tchimoco, the son of a former battalion member, pointing to a derelict complex of buildings.

Disbanded
But the whirlwind political change of the 1990s swept away the white-minority government, brought Nelson Mandela's ANC to power and shattered the town's sheltered existence.

The battalion was disbanded in 1993 and a number of the soldiers left Pomfret along with their families.

Many of the men of Angolan heritage waived their right to be incorporated into the reformed army in return for a significant cash handout worth $32,000 (30,000 euros) in today's terms.

Gradually families who had contributed to the small community began to drift away and the town started its slide into decline.

By the 2000s, the government signalled its intention to close the base in Pomfret and to relocate the remaining families. But a hard core of ex-servicemen refused to budge.

"We arrived here with many promises. Then the new government wanted us to go, leaving us without a future. Why should we leave our homes?" asked Lourenco.

The police service left the town, homes were ransacked and the hospital was trashed.

The modest graveyard, which stood as a reminder to the men of 32 Battalion lost in South Africa's "border wars", became overgrown.

'Staying is useless'
Finally in 2014, authorities cut the power to the town. Water is only supplied once a week.

"The biggest challenge for Pomfret is that it's 200 kilometres (124 miles) from the first city," said a white South African, who served in 32 Battalion and now helps Pomfret's remaining residents.

"There's no economy," he said, declining to be named. "Most of the shops have closed and buildings have been destroyed to prevent people from staying there."

Just one school remains open to serve the entire town, educating students up to the age of 18.

Antonio Isaac, an 18-year-old relative of a 32 Battalion fighter, said: "Staying here is useless for me. It's not a good place; after school, I will go."

Many of those who opted to remain feel stranded between South Africa, where their service is scorned, and Angola, where they are seen as traitors.

"Angolans say we killed them. The ANC here think that we killed their fighters," said Alexander Joaquim, a 74-year-old veteran of 32 Battalion. "What are we supposed to do?"