An Asian American official bared his chest, revealing scars from his army service 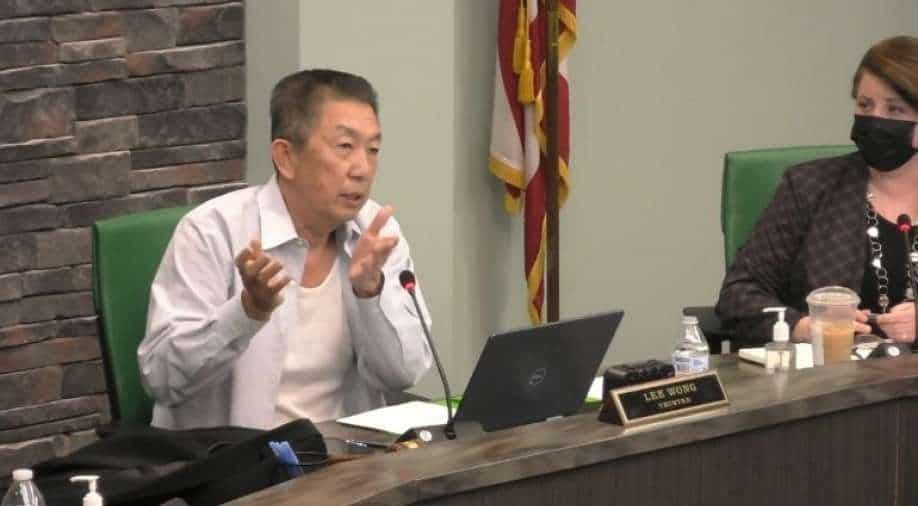 Lee Wong, an elected official in West Chester, Ohio, said he could no longer endure the indignities of prejudice against Asian-Americans, or people questioning his loyalties to America. Photograph:( Twitter )

Wong removed his suit jacket and his tie and unbuttoned his dress shirt, according to a video of the board’s March 23 meeting, which has since drawn widespread attention. Then, he lifted his undershirt, revealing scars on his chest that he said he got while serving in the U.S. Army

As town meetings go, the discussion was fairly routine, meandering from what Memorial Day celebrations might look like in the second year of the coronavirus pandemic, to a federal grant application for bulletproof vests for police officers.

But when the time came for the trustees in West Chester Township, Ohio, to deliver personal remarks at the group’s most recent meeting, the board’s chairman, Lee Wong, who is Asian American, did something unusual.

Wong removed his suit jacket and his tie and unbuttoned his dress shirt, according to a video of the board’s March 23 meeting, which has since drawn widespread attention. Then, he lifted his undershirt, revealing scars on his chest that he said he got while serving in the U.S. Army.

Wong, 69, said he could no longer endure the indignities of prejudice against Asian Americans or having people question his loyalties to America.

“Here is my proof,” he said. “Now is this patriot enough? I’m not ashamed to walk around anymore. Before I was inhibited. People looked at me strange.”

It was the board’s first meeting since March 16, when a gunman killed six women of Asian descent in a series of attacks on massage businesses in the Atlanta area, leaving eight people dead.

Prosecutors are weighing whether to classify the shootings as a hate crime, but the rampage came amid a rise in violent crimes targeting people of Asian descent across the United States, which advocates say has been exacerbated by pandemic-related racism.

Wong immigrated to the United States from the island of Borneo in 1971, according to a profile about him in The Cincinnati Enquirer last year when he ran unsuccessfully for the state Senate.

He is a Republican, though the township board is a nonpartisan body, the Enquirer reported. He was first elected to the board in West Chester Township, a northern suburb of Cincinnati, in 2005.

About halfway through the board’s meeting, Wong said he would depart from protocol and had something that he wanted to share.

He said he came to the United States when he was 18 and once had been assaulted in a racially motivated attack in Chicago. For too long, Wong said, he had put up with racism but had been too afraid to speak out because he feared facing more discrimination and abuse.

“In the last few years, things are just getting worse and worse,” he said. “There are some ignorant people that will come up to me and say that I don’t look American or patriotic enough. Now, that really gets my goat.”

He said that Asian Americans had been subjected to widespread prejudice, particularly restaurant workers.

“They are hardworking Americans,” he said. “Some even served in the U.S. armed forces — not Chinese army. U.S. Army.”

Noting that he had been a U.S. citizen for quite some time, Wong said that he had served in the U.S. Army for 20 years. He got the scars while serving at Fort Jackson in South Carolina, The Journal-News of Hamilton, Ohio, reported.

Efforts to reach Wong on Sunday were not immediately successful, but he told CNN that he got the scars after undergoing multiple surgeries for cuts that got infected during combat training.

“People question my patriotism, that I don’t look American enough,” Wong said at the meeting. “They cannot get over this face.”

Wong said the country had significant work to do to address bigotry.

“You know prejudice is hate,” he said. “We need to be kinder, gentler to one another, because we are all the same. We are one human being on this earth.”