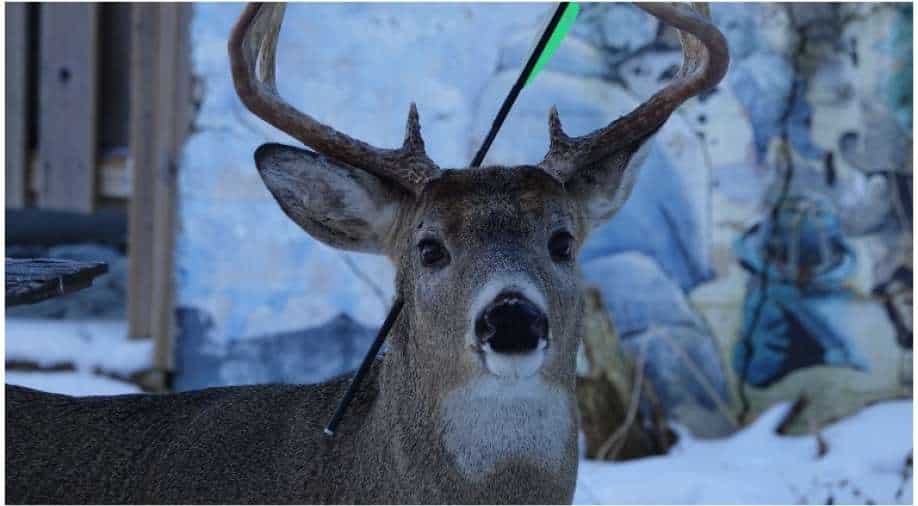 The photo has been clicked by a photographer name Lee-Anne Carver. The deer who she named Carrot has befriended her for three years. But she was not at all ready for what happened just over a week ago

The image is startling, endearing and scary at the same time. Although the frame shows a cute deer, what is horrific is an arrow has pierced his head and come out of from just below his eye. The arrow remains lodged in the deer's head but the deer is very much alive. This viral image is being shared widely on social media.

The photo has been clicked by a photographer name Lee-Anne Carver. The deer who she named Carrot has befriended her for three years. But she was not ready for what happened just over a week ago.

"Today, he came to my house with an arrow through his head. It was disturbing, startling and crushing," she writes in a Facebook post dated December 10.

"My husband came in the house crying to tell me," she adds.

To both of their surprise, Carrot was behaving as if nothing had happened. It licked Lee-Anne's hands as it always did and showed no signs of pain. There was no blood, according to her.

"For now, allow me to say the arrow missed all vitals. His skull protected him," she says.

Before anyone could react on Facebook, she requested everyone to not rally for the deer to be put to death to end his misery as she said he was "thriving" and that there was "no need to put him down".

She has even posted a video of the deer walking around with the arrow wedged in his skull.

Three years ago we met a fawn we came to call Carrot. I've met hundreds and hundreds of deer over the decades who are...

The post has got many comments from users who suggest many things.

"Contact game warden" says a user while others opine say calling a veterinarian would be better. Many users have expressed dismay at how anyone could be this cruel to an animal to put an arrow through its head.

The photographer has posted a link of an FB page as an answer to many comments.

"Carrot was shot with a  target arrow made from carbon. He was shot in a residential area and it seems this incident had nothing to do with hunting"

What followed after the deer's image went viral was wonderful. Government officials visited the photographer's house to help the wild deer and by coincidence, it was present there when they arrived.

The officials carefully cut the upper protruding part of the arrow. They have opined that rest of the arrow is expected to naturally slide out as the deer's body heals itself.

"I went looking for Carrot in the evening and I found him with his friend," writes Lee-Anne. She adds that he was "chilling" with his deer friend.