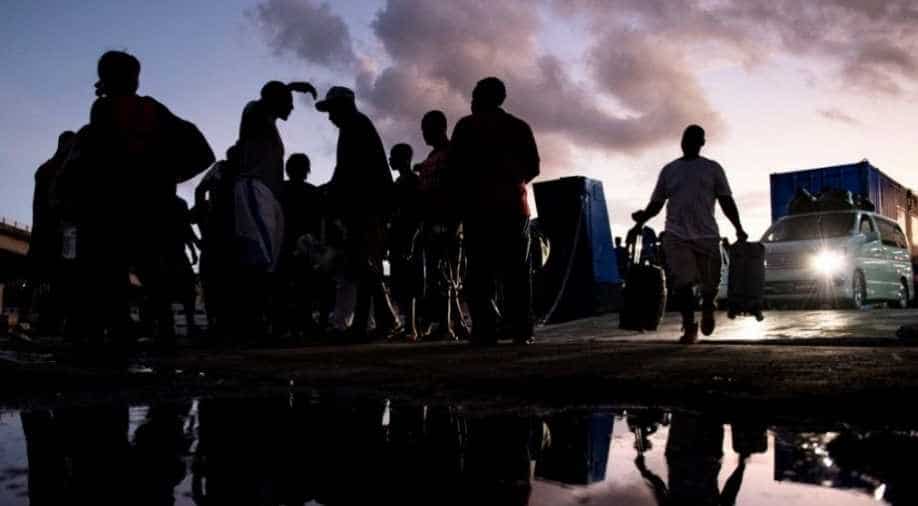 Even as some Bahamians began to reunite with their loved ones, the death toll 35 so far in the Abaco Islands and eight in Grand Bahama was likely to climb 'significantly,' according to Prime Minister Hubert Minnis.

Bahamians scrambled to escape the islands hardest-hit by Dorian, which has killed at least 43 people, while the storm wreaked "havoc" farther north in Canada after making landfall near Halifax Saturday.

Even as some Bahamians began to reunite with their loved ones, the death toll 35 so far in the Abaco Islands and eight in Grand Bahama was likely to climb "significantly," according to Prime Minister Hubert Minnis.

A loosely coordinated armada of passenger planes, helicopters and both private and government boats and ships including redirected cruise liners -- converged in the Bahamas on the horribly battered Abacos to help with evacuations, both to Nassau and to the US mainland.

Evacuees began flowing out of the region as a cruise ship carrying 1,400 people docked Saturday in Riviera Beach, Florida, CNN reported. All had documents to enter the United States.

The Coast Guard said that all Bahamian ports had now reopened and that it had deployed nine cutters to the islands.

Six of its MH-60 Jayhawk helicopters had so far rescued 290 people.

And more than 260 Abacos residents arrived Friday in Nassau on a government-chartered ferry, part of the first wave of people to be evacuated off the archipelago's most decimated islands.

More than 500,000 power outages were reported according to the Canadian Hurricane Centre, which said the problem extended across the Maritimes, a three-province region in east Canada comprising Nova Scotia, New Brunswick, and Prince Edward Island. Dorian made landfall earlier in the day south of the port city of Halifax, home to Canada's Atlantic fleet.

Television images showed a downpour and howling winds in the empty streets of downtown Halifax where a crane collapsed onto a semi-constructed building and a roof was torn off another apartment.

No significant injuries or fatalities had been reported according to Halifax Regional Police late Saturday, The Toronto Star said.

Police had evacuated 150 people from downtown Halifax, including residents of the apartment building, they said.

Bahamas residents said conditions on the devastated islands were brutal and that the smell of unrecovered bodies, along with mounting piles of garbage, was oppressive and unsanitaryHundreds or even thousands of people were still missing, officials said, as search-and-rescue teams continued their grim retrievals.

For now, he said, supplies of food and water were adequate, although several witnesses from Abaco contested that.

While the prime minister called the loss of life "catastrophic and devastating," Health Minister Duane Sands said the final death toll "will be staggering."

UN relief officials said more than 70,000 people on Grand Bahama and Abaco were in need of assistance.

The WFP was sending food and supplies.

A UN World Food Program team estimated that 90 per cent of buildings in Marsh Harbour were damaged.

The US Coast Guard, Britain's Royal Navy and private organizations have been helping evacuate island residents to Nassau, hampered by damaged piers and airport runways.

Chamika Durosier was waiting on Saturday at the Abaco airport. The island, she said, was unsafe.

"The home that we were in fell on us," she said. "We had to crawl -- got out crawling. By the grace of God, we are alive."She described the increasingly desperate plight of those left behind.

"Dead bodies are still around and it's not sanitary."

Dorian, a monstrous Category 5 hurricane when it raked through the Bahamas, was buffeting eastern Canada with winds equivalent to those of a Category 1 hurricane.

Although it packed hurricane-force maximum sustained winds of 90 miles per hour (150 kilometres per hour), these were occurring primarily over water, the US-based National Hurricane Center reported in its 11:00 pm (0300 GMT) advisory.

Storm surges were causing widespread flooding and three to five inches (7.5 to 12.5 centimetres) of rain were expected in Nova Scotia.

Prime Minister Justin Trudeau was briefed on the storm."The safety of Canadians is our number one priority and we're ready to help Atlantic Canada through this storm," he said on Twitter.

Canada was sending up to 700 troops to Atlantic provinces to assist "with the restoration of power services, clearing main roadways and evacuating residents in flooded or severely damaged areas," Goodale said in a statement.

Defense Minister Harjit Sajjan assured Canadians on Twitter that "our Armed Forces will be there to aid you in this challenging time. Stay safe and listen to your local first responders."

Dorian was expected to "drop below hurricane strength on Sunday" and move "near or over" western Newfoundland then enter the North Atlantic later in the day, the NHC said.

Earlier, Dorian brought flooding and power outages but no major damage to the coastal Carolinas and Virginia in the United States.