Amid differences, Tusk urges EU Parliament to be open to long Brexit extension 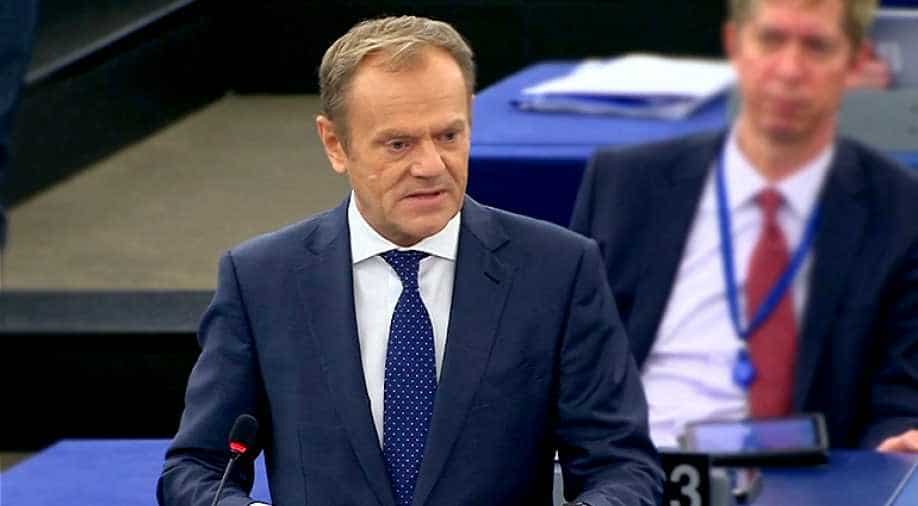 On Sunday, a huge rally of nearly one million in London focussed on demanding a second Brexit referendum to overturn the vote on June 2016.

EU Council president Donald Tusk has said the organization should be "open to a long extension if the UK wishes to rethink its Brexit strategy".

Tusk added that a long extension would also mean UK's participation in the European Parliament elections.

On Sunday, a huge rally of nearly one million in London focussed on demanding a second Brexit referendum to overturn the vote on June 2016.

Political figures including Tom Watson, the deputy leader of the opposition Labor Party, the First Minister of Scotland Nicola Sturgeon, and Mayor of London Sadiq Khan all delivered speeches at the rally.

Amid the differences, ex-UKIP Leader and and chairman of the Europe of freedom and direct democracy group at the EU parliament, Nigel Farage said: "Do you really want the United Kingdom to contest the European elections, to send back a very large number of 'Leave' MEPs just at the time when you're fighting populism as you see it across the continent? Do you really want me back in this place?

Differences continued inside the European Parliament as the British member of the European Parliament and Scottish National Party member, Alyn Smith pleaded: "The best Brexit is not Brexit. So, colleagues, please, don't close the doors on us now. There are a lot of us in Scotland and elsewhere across the UK working hard to turn this around, to serve our citizens, to remain within that family of nations."

Last week the European Union had extended the original March 29 deadline for Britain's departure from the bloc to May 22. However, it is subject to British House of Commons approving Prime Minister Theresa May's withdrawal agreement.

In the new scenario, if the UK Parliament decides to again reject May's plan within the deadline date in the British House of Commons then the UK could still crash out of Brexit with a "no-deal" by April 12th.

Prime Minister Theresa May admitted Monday she had still not secured the votes needed to get her Brexit deal through parliament. May's own cabinet including the Conservative Party is deeply divided over the issue.