American, wife freed from Venezuela jail arrive in US: Senator 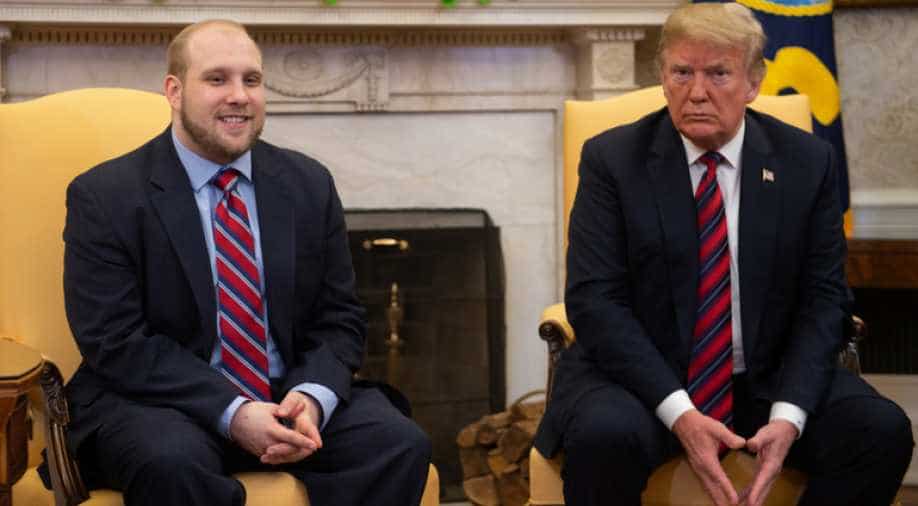 Joshua Holt, who had been detained in Venezuela for two years with US President Donald Trump in the Oval Office at the White House in Washington. Photograph:( AFP )

An American and his wife held nearly two years in a Venezuelan jail arrived home in the United States Saturday after their release in what Venezuela's leftist government said was a gesture aimed at fostering dialogue with Washington to avert US "aggressions."

Utah Senator Orrin Hatch, who led a two-year effort to win the couple's freedom, posted a video of their airport reunion with Holt's parents in Washington.

US President Donald Trump said Holt would be received with his family at the White House on Saturday evening.

Hatch praised the "pivotal efforts" of Corker, chairman of the Senate Foreign Relations committee, to win Holt and Caleno's freedom.

"Good news about the release of the American hostage from Venezuela," Trump tweeted. "The great people of Utah will be very happy!"

He said it was part of "efforts to maintain a respectful dialogue, diplomatic relations of respect, that permit gates to be opened to avoid the aggressions to which (Venezuela) has been subjected."

He apparently was referring to US sanctions, which Washington has tightened since Maduro was reelected earlier this month in elections that the US rejected as a "sham."

But Vice President Mike pence immediately squelched any suggestion that the sanctions -- which aim to deprive the cash-starved regime of revenue -- would be eased.

"Very glad that Josh Holt is now back home with his family – where he has always belonged. Sanctions continue until democracy returns to Venezuela," Pence said in a tweet.

Holt, a 26-year-old Mormon missionary from Utah, had traveled to Venezuela in June 2016 to marry Thamara, whom he had met on the internet.

Shortly after they married, however, the couple was arrested by the Venezuelan intelligence service Sebin, and accused of possessing weapons and plotting to destabilize the Maduro government.

Top officials in the Socialist regime labeled Holt a US spy. In December, the Justice Ministry decided to bring the couple to trial, and rejected a petition for his conditional release.

Holt and his wife were being held at a prison in Caracas known as the Helicoide where the Sebin keeps political prisoners.

Earlier this month, he surfaced during a protest by opposition activists jailed in the massive hilltop structure, and appealed for US help in a video posted on Twitter.

"I'm calling on the people of America. I need your help to get me out of this place," Holt said in the video.

He also appeared in a photo taken of a group of prisoners inside the detention center.

A family statement issued by Holt's lawyer in Venezuela, Carlos Trujillo, expressed thanks for "your collaboration during this time of anguish we have been through."

The statement expressed gratitude "to everyone who participated in this miracle."

Holt's release comes as Maduro moves to ease tensions that have spiked since the May 20 elections, which were boycotted by most opposition parties and denounced as illegitimate by the US, EU, Canada and at least a dozen Latin American countries.

The Trump administration tightened financial sanctions on cash-strapped Venezuela after the vote.

The Venezuelan president then retaliated by giving the two top US diplomats in the country 48 hours to leave, accusing them of conspiring against his government.

On Friday, however, human rights monitors reported the release of 20 activists who had been jailed in the western state of Zulia for protesting against the government.

In taking the oath of office on Thursday, Maduro acknowledged that the sanctions are biting.

"A profound rectification is needed, things have to be done anew and better. We are not doing things well and we have to change this country."

The Venezuelan economy is in shambles. Hyperinflation is expected to hit 13,000 percent this year and dire shortages of food that have driven hundreds of thousands of citizens to pour into neighboring Colombia and Brazil.

Maduro has blamed the US for his country's woes, but most economists point to years of destructive policies and corruption as well as a period of plunging oil prices.

Venezuela -- once one of Latin America's most prosperous countries -- has the world's largest oil reserves but oil production has fallen sharply in recent years as corruption, disinvestment and the loss of skilled workers take their toll.