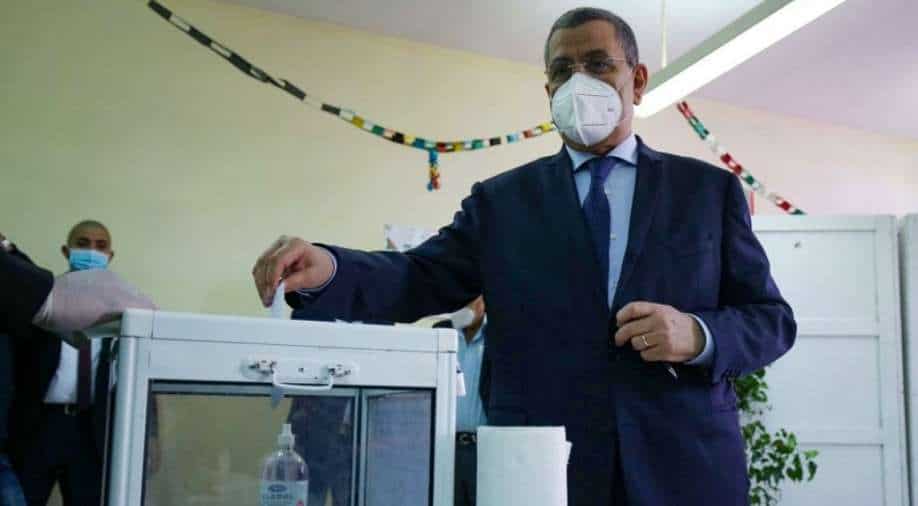 Algerian Prime Minister Abdelmadjid Djerad casts his ballot at a polling station in the capital Algiers, during a vote for a revised constitution Photograph:( AFP )

Algerians voted on Sunday on whether to approve a revised constitution that imposes term limits, promises new freedoms, and is aimed at answering demands from pro-democracy protesters who pushed out their long-serving, autocratic president last year.

With the "yes" camp almost certain to win, the only real question was how many would take part in a poll also seen as a bid to bolster Bouteflika's successor Abdelmadjid Tebboune, currently hospitalised overseas.

The turnout hit a record low, however, as opponents of the amended constitution called for a boycott after they were barred from campaign venues or from expressing their views on public television or radio. The referendum took place symbolically on the 68th anniversary of the beginning of Algeria's war for independence from France.

Pro-democracy activists say the revised charter does not go far enough to open up politics to a new generation of leaders. Islamist parties say it does not do enough to promote Islam and the Arabic language, and oppose a measure on religious freedom.

The Hirak protest movement had called for a boycott, dismissing the revised text as a "change of facade".

The youth-led movement launched vast demonstrations in early 2019 and kept them up for more than a year until the coronavirus pandemic forced their suspension.

Meanwhile, the man who pushed for the referendum, President Abdelmadjid Tebboune, is hospitalised in Germany after several people in his administration showed symptoms of the virus. The 74-year-old's exact ailment and whereabouts are unclear, though a presidential adviser said on Sunday that Tebboune was "in good health" and continuing to undergo medical examinations.

But observers have pointed out that the draft keeps key powers and appointments in the hands of the president.

If passed, it will be "the most authoritarian constitution in the entire Mediterranean", said constitutional researcher Massensen Cherbi of Sciences Po university in Paris.

For many Algerians, the most dramatic proposed constitutional change would allow the Algerian military to intervene abroad, in the United Nations or the African Union peacekeeping operations, a major departure from the current doctrine of non-interference.
The military has long played a key role in Algeria, and military chief Gen. Said Bengriha has campaigned around the country for a "yes" vote.

The revision of the constitution was among the promises the president made when he was elected in December. It limits presidents and parliament members to two terms, makes it easier to create political parties, and hands some presidential powers to the prime minister, among other changes.

During a final campaign rally on Wednesday, Prime Minister Abdelaziz Djerrad said the amendments would "make it possible to definitively turn the page on the old practices of management of public affairs, with the emergence of new institutions and new methods of exercising responsibilities based on democracy, competence, transparency".

He insisted that it "reflects the major demands" of the Hirak protest movement, and will give young people and non-governmental actors more of a say in Algerian policies.

Hirak activists and their supporters, who want a wholesale overhaul of Algeria's leadership, see the referendum as an effort to look progressive while leaving the overall power structure in place.