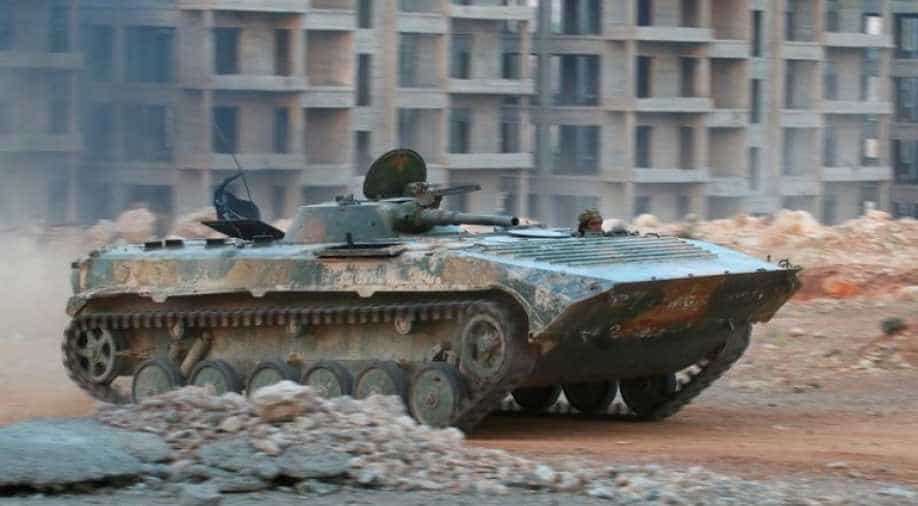 Forces loyal to President Bashar al-Assad have steadily advanced in Syria's north since announcing they had retaken full control over Aleppo city in late December. Photograph:(Reuters)
Follow Us

Syria's military said Thursday it had captured a string of towns and part of a key highway from the Islamic State group in the northern province of Aleppo.

Since launching a broad offensive against the jihadists nearly three weeks ago, the army has taken around 250 square kilometres (100 square miles) of territory, it said in a statement carried by official news agency SANA.

The army said the advances form "a launching pad for developing military operations against Daesh," using an Arabic acronym for IS.

Forces loyal to President Bashar al-Assad have steadily advanced in Syria's north since announcing they had retaken full control over Aleppo city in late December.

It was the biggest blow to Syria's rebel movement since the uprising against Assad erupted in March 2011.

Syria's army on Thursday also said it had seized a 16 kilometre-stretch (10 miles) of highway linking Aleppo city to the IS-held town of Al-Bab.

Al-Bab, 25 kilometres (15 miles) south of the Turkish border, is the last remaining IS bastion in Aleppo province and is seen as a prize by nearly all sides of Syria's complex war.

Since December, Turkey-backed rebel fighters known as the Euphrates Shield alliance have edged towards Al-Bab from the north.

According to the Syrian Observatory for Human Rights, fierce fighting Thursday on the edges of Al-Bab left 11 IS fighters and seven Euphrates Shield fighters dead.

"There may be Turkish soldiers among the Euphrates Shield toll, but we don't know yet," said Observatory head Rami Abdel Rahman.

Euphrates Shield forces are on the edges of the IS-held town, while government and allied fighters are still approximately seven kilometres to the south, according to the Britain-based monitor.

"Regime fighters and Euphrates Shield forces are within sight of each other, but they haven`t attacked each other yet," he told AFP.

Turkish President Recep Tayyip Erdogan pledged last month that "the operation in Syria's Al-Bab will be finished in a short time, God willing".

But Ankara's involvement has angered Damascus, which on Thursday said it delivered two letters to the United Nations Security Council rebuking Turkey's military operations in Syria.

"In recent days, Turkish armed forces have carried out an incursion into Syrian territory and have occupied some Syrian villages, including two west of Al-Bab," said the letters, sent by the foreign ministry and published by SANA.

"This represents a flagrant violation of Syrian sovereignty and of the principles and purposes of the UN Charter and the rules of international law," they said.

The letters accused Ankara of supporting "terrorism" and said the Security Council should act to "put an end to the violations of the Turkish regime".

The two parties back opposing sides in the war but have joined forces in recent months to try to bring an end to the bloody conflict.

More than 310,000 people have been killed in Syria and millions have been displaced since the uprising broke out nearly six years ago.