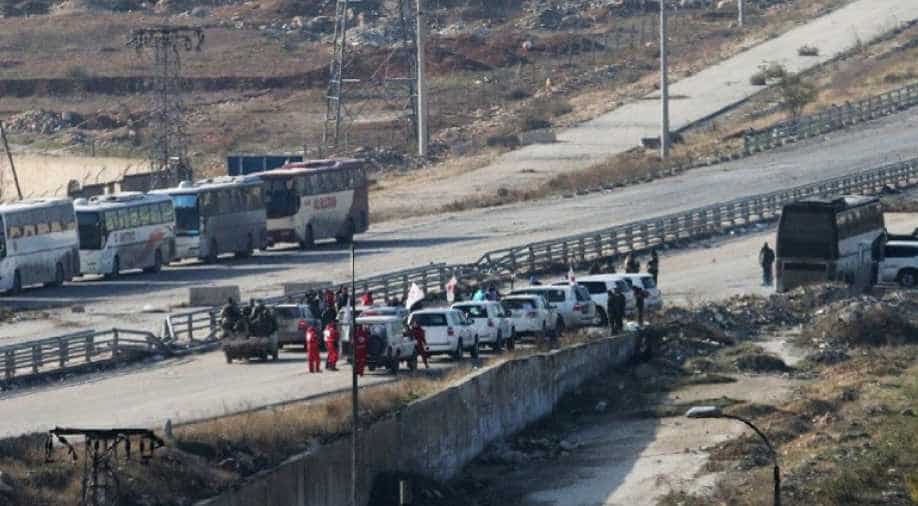 Before evacuation operations were halted around 8,500 people, including some 3,000 rebels, left for rebel-held territory elsewhere in the north, the Syrian Observatory for Human Rights said.? Photograph:( AFP )

Some 350 people were able to leave despite evacuations officially suspended until further notice, a medical official said.

"They were in a terrible state, Dbis told AFP.

"They hadn't eaten, they had nothing to drink, the children had caught colds, they were not even able to go to the toilet," he added.

The Syrian Observatory for Human Rights confirmed that 350 people were able to be evacuated after Russia and Turkey urged the Syrian regime to allow the buses to pass its final control point.

From Khan al-Assal people will be able to travel to Idlib and other parts of Aleppo.

The evacuation process had been postponed after buses were attacked and torched by armed men.

The buses were meant for two Shiite villages, Fuaa and Kafraya.

There was a dispute over how many people would be evacuated from the two villages.

The Syrian Observatory for Human Rights said security guarantee was needed before evacuation process resumed, after one bus driver was killed in the attack.

The Rights monitor also said the buses will not leave until the people of Fuaa and Kafraya were able to leave.

Before the suspension, buses had arrived in Aleppo under Red Crescent and International Committee of the Red Cross (ICRC)  "to bring the remaining terrorists and their families out," state news agency SANA said, referring to the rebels.

Some 100 buses would take people out, SANA had reported.

Under the terms of deal signed between the Syrian government and the rebels, the rebels and their families along with civilians will be allowed to leave for government-held areas.

Evacuations will also take place from Zabadani and Madaya, two regime-besieged rebel towns in Damascus province, as part of the deal, a rebel representative had confirmed.

Before evacuation operations were halted around 8,500 people, including some 3,000 rebels, left for rebel-held territory elsewhere in the north, the Syrian Observatory for Human Rights said.