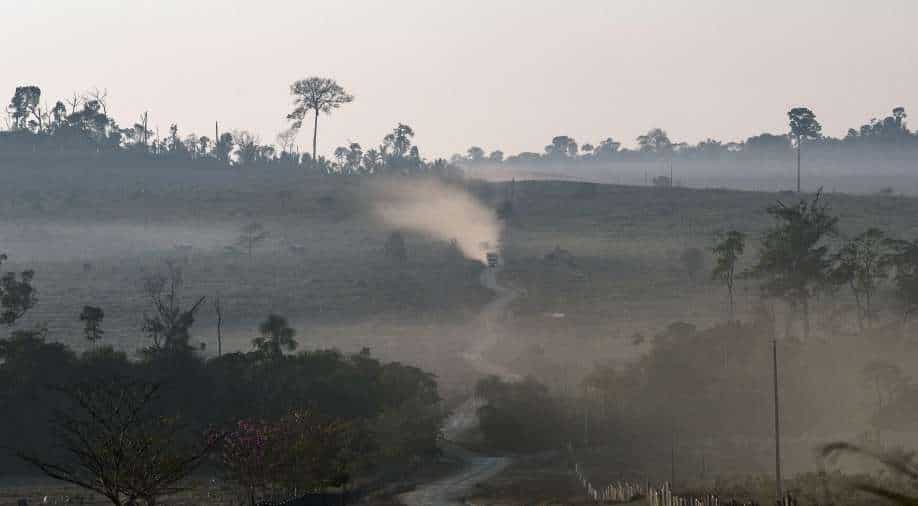 Pastureland near the town of Buritis in the Brazilian state of Rondônia Photograph:( The New York Times )

The mercury is released into the air by miners searching for gold along nearby riverbanks. They use mercury to separate the precious metal from surrounding sediment and then burn it off. Carried in the air, particles catch on leaves like dust and are washed onto the forest floor by rain

The protected old-growth forest in the Amazon of southeastern Peru appears pristine: Ancient trees with massive trunks grow alongside young, slender ones, forming a canopy so thick it sometimes feels to scientists like evening during the day.

But a new analysis of what’s inside the forest’s leaves and birds’ feathers tells a different story: The same canopy that supports some of the richest biodiversity on the planet is also sucking up alarming levels of toxic mercury, according to a study published Friday.

The mercury is released into the air by miners searching for gold along nearby riverbanks. They use mercury to separate the precious metal from surrounding sediment and then burn it off. Carried in the air, particles catch on leaves like dust and are washed onto the forest floor by rain. Other particles are sucked into the leaves’ tissue. From there, mercury appears to have transferred up the food web to songbirds, which showed levels of mercury 2-12 times as high as those in comparable areas farther from mining activity.

“The patterns were so much more stark and so much more devastating than we expected to find,” said Jacqueline Gerson, a biogeochemist at the University of California, Berkeley, who led the research as a doctoral student at Duke University. The study was published in the journal Nature Communications.

The findings, from the Madre de Dios region of Peru, provide new evidence of how people are altering ecosystems around the world, as species extinction rates accelerate, with little understanding of the consequences.

Scientists have long known that mercury, which is also released into the air by burning coal, is a dangerous neurotoxin to humans and animals. In aquatic ecosystems, it can easily convert into a very poisonous form called methylmercury. As big fish eat smaller ones, the mercury sticks around, accumulating up the food web. For this reason, doctors advise pregnant women around the world to avoid eating large, predatory fish like shark, king mackerel and swordfish.

In the Madre de Dios region, where illegal gold mining has surged in recent years along with the price of gold on global markets, the government declared a health emergency in 2016 after 40% of people tested in 97 villages had dangerously high levels of mercury in their systems.

Researchers have mostly focused on human exposure to mercury in rivers, lakes and oceans. They have not been as worried about it on land, since it is less likely to become methylmercury. But the sheer load of mercury going into the forest, combined with rainy conditions and soil, are leading to concerning levels of methylmercury there.

“It’s been assumed that people living in the Peruvian Amazon have been getting all their methylmercury exposure from eating fish,” Gerson said. “That may not be the case.”

The kind of gold mining that happens in the Madre de Dios region, called artisanal and small-scale gold mining, occurs in about 70 countries, often illegally or unofficially, and it is the largest source of mercury pollution in the world. It also accounts for about 20% of global gold production.

Julio Cusurichi Palacios, president of the Native Federation of the Madre de Dios River and Tributaries, a group formed by Indigenous communities in the region, said the government should combat illegal mining with enforcement but also by strengthening alternative livelihoods for Indigenous and other local people. They harvest fish, Brazil nuts, yucca and corn, he said, but need help “improving their goods, selling their goods, so they don’t fall into thinking, ‘I better go into mining, since my product doesn’t have a market.’”

For the research, Gerson and her team collected soil, leaves, forest litter and other samples at three sites near mining activity and two farther away. To collect certain leaves, they used a giant slingshot to shoot a rope with a weight into the canopy and pull branches down.

When the mercury levels came back, it was the protected old-growth site near gold mining activity that stood out. Those areas had more than 15 times as much mercury as nearby clearings, presumably because the thick canopy and vegetation caught and stored the mercury.

Shocked by the numbers, Gerson kept searching the scientific literature for examples of forests with similar levels. The only one she found was in an industrial area in Guizhou, China, polluted by mercury mining and coal burning. Some levels in the healthy-looking old-growth Amazon were even higher.

By capturing the mercury, the forests are helping to keep it out of aquatic systems, said Emily Bernhardt, a professor of biogeochemistry at Duke and co-author of the study.

“These are some of the most biodiverse forests on Earth,” Bernhardt said. “We already knew they sequester tons of carbon in their biomass and their soils, and we have now uncovered an additional, incredibly important service.”

But the service is not without cost. Mercury poisoning can affect birds’ ability to navigate and sing, and can cause them to lay fewer eggs, she noted. It can also make their eggs less likely to hatch.

Previously, scientists had assumed that the airborne mercury pollution from this kind of gold mining would have less impact locally, said Daniel Obrist, an environmental science professor at the University of Massachusetts Lowell who has studied mercury in forests in the northeastern United States and the Arctic and was not involved with the Amazon study.

“It fills a very important gap in understanding what happens there with small scale mining and what the implications are,” Obrist said. “Not only for global processes, but also for local communities.”