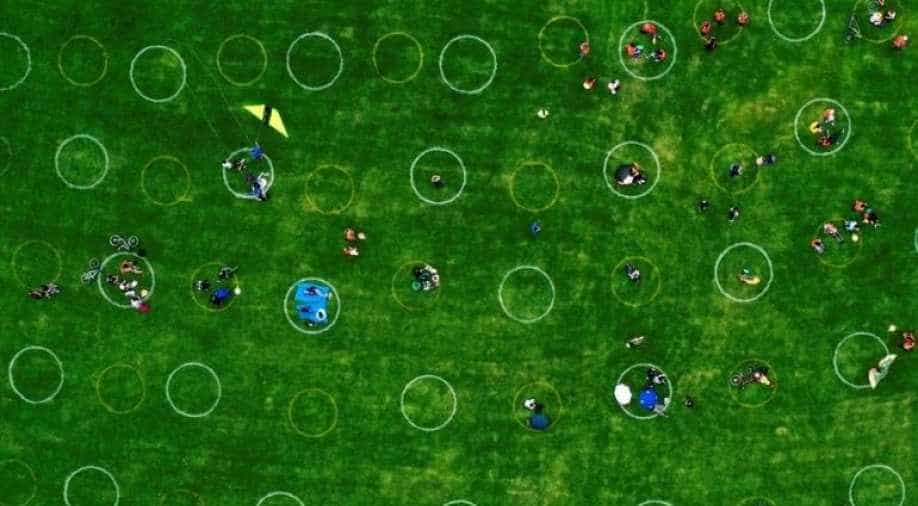 Aerial view showing people enjoying the reopening of the parks, following the ease of measures imposed by Bogota's Mayor and the Colombian Government within the COVID-19 coronavirus pandemic, at Simon Bolivar park in Bogota on August 30, 2020. Photograph:( AFP )

This offers fresh evidence on the virus, about which more information comes in every few days, as medical professionals find out more about this virus

A research published on Tuesday traced the airborne transmission of COVID-19 on a Chinese bus, whereby a single carrier was able to infect more than two dozen people on the bus.

This offers fresh evidence on the virus, about which more information comes in every few days, as medical professionals find out more about this virus.

The research found that the person was able to infect people who were not even in the direct line of contact.

In the beginning of the pandemic, health authorities did not believe that the virus was airborne, ie, that the virus could send infectious micro-droplets into the air. As evidence kept coming in, scientists changed their tune.

Also read: One out of two hand sanitizers contain harmful chemicals that can be fatal to humans: Study

The article published on Tuesday in JAMA Internal Medicine took into account passengers that were on a 50-minute trip to a Buddhist event in the Chinese city go Ningbo and were aboard two buses in January. This was before face masks became a necessity in public places.

According to researchers, the patient zero of COVID-19 was the one who spread this virus to others on the bus, in the initial phases of the virus. The person, whose details were not divulged, came in contact with people from Wuhan, where the virus first kicked off in 2019.

When the scientists mapped and traced everybody who was on the bus, they found that 23 out of 68 were carrying the virus.

Surprisingly, the virus was able to affect people who were even farther off than 1-2 metres (3-6 feet), which is seen as the maximum parameter for the virus to spread. Those who were sitting in the front and the back of the bus also got infected.

The single passenger who spread the virus to everyone else was not showing symptoms of the virus on the bus.

Additionally, it is possible that air conditioning simply recirculated the air which was present in the bus, which led to further transmission of the virus.