Aging beer in a sunken ship sounded like a good idea. Thieves thought so too. 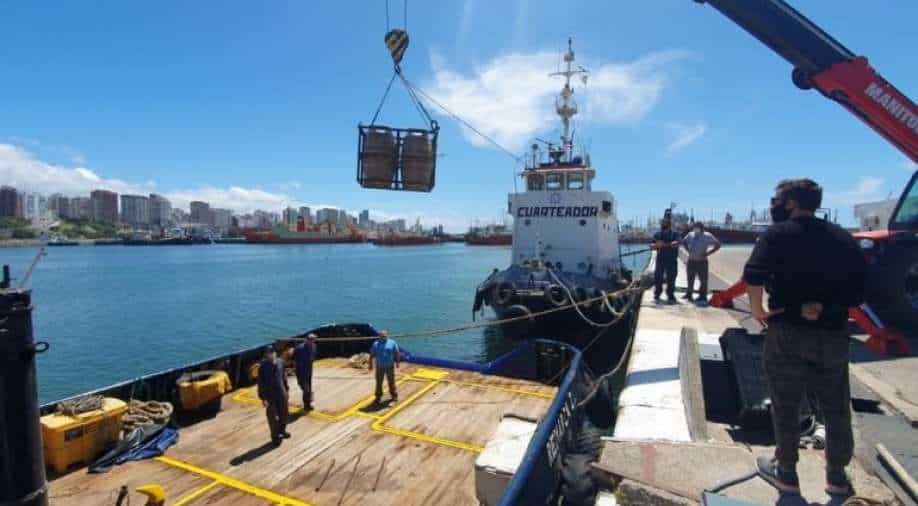 An undated photo provided by the Kronomether Project of barrels of beer secured in a steel cage, ready to be taken out to sea and attached to a sunken ship for deep water aging 66 feet below the surface of the ocean. The owners of the three breweries in Mar del Plata, Argentina, that had teamed up with a diving school for what they described as a first-of-its-kind experiment in deep-water beer-making were left mystified and heartbroken, upon discovering on Tuesday, Feb. 23, 2021, that their 185 gallons of artisanal beer had apparently been pilfered. (Kronomether Project via The New York Times) Photograph:( The New York Times )

The plan was to blend the content in the barrels with another beer. If all went according to plan, the brewers expected to be left with 1,000 liters, or 264 gallons, of a custom-made brew that would fill some 2,000 bottles and sell under the name Kronomether

It wasn’t exactly a sunken treasure.

But that apparently didn’t stop a team of divers in Argentina from going to extraordinary lengths to pilfer 700 liters, or 185 gallons, of artisanal beer that had been left by three local breweries to age, attached to a sunken ship, on the ocean floor.

The owners of the three breweries in Mar del Plata, which had teamed up with a diving school for what they described as a first-of-its-kind monthslong experiment in deep-water beermaking, were left mystified, and heartbroken, upon discovering Tuesday that the barrels were gone.

“I started crying,” said Carlos Brelles, who runs the Thalassa Diving School in Mar del Plata, a coastal city 5 miles from the sunken ship. “Three or four people without morals destroyed the work of so many people who put in so much effort.”

Brelles and the brewery owners said they have no clues that could shed light on the disappearance of the barrels, but they haven’t ruled out an act of sabotage. They asked prosecutors to open a criminal investigation.

It was a bitter end to an idea years in the making that was hatched over casual chats at the diving school.

Brelles, 52, having read news reports about beer that had been aged underwater in other countries, pitched the idea back in 2018 to a friend, Eduardo Ricardo, 40, one of the owners of Heller Brewery. And as the notion spread among beer enthusiasts in Mar del Plata, several took to the idea — but had a twist. Previous experiments had involved shallower depths, so they wanted to test beers made under greater pressure. They spent months securing permits to affix the barrels to the Kronomether, an abandoned Soviet-era ship 66 feet underwater that sank in 2014 and had become a favorite spot of recreational divers.

“No one had ever done this before,” said Juan Pablo Vincent, 43, master brewer at Baum brewery, who was involved in the effort.

The brewers settled on a dark, strong ale with an alcohol level of between 11% and 12%.

It took more than a year to obtain the necessary permits, and then coronavirus quarantine measures slowed down the endeavor, so the team was only able to lower the seven barrels of beer into the ocean Nov. 22.

The plan was to blend the content in the barrels with another beer. If all went according to plan, the brewers expected to be left with 1,000 liters, or 264 gallons, of a custom-made brew that would fill some 2,000 bottles and sell under the name Kronomether.

The breweries intended to donate the proceeds to a local natural science museum.

Vincent said the contents of the barrels would be useless in the hands of people who lack sophisticated beer-making skills, since the purpose of the brew was to mix it with another beer.

“If they stole it for their own consumption, they’re going to have to throw it away,” said Vincent. “It was a lukewarm, gasless liquor that would be very difficult to drink.”

“I think they broke everything so the barrels would drift away,” Brelles said. “It was malice for malice’s sake.”

Despite the disappointment, they are determined to try again.