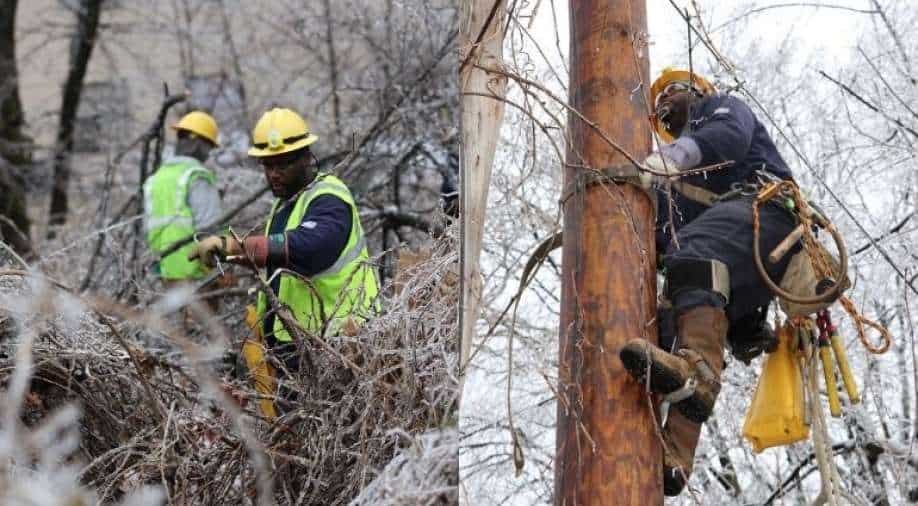 Authorities are making concerted efforts to restore power in the US. Photograph:( Twitter )

Most of the outages occurred in Tennessee. Over 93,000 homes were experiencing power failure, as per PowerOutage.us. In New York, around 43,000 homes and in Ohio, 30,000 houses have been left without power. Around 95% customers should have power restored by Thursday next week, said Memphis Light, Gas and Water, which is a major utility company in Tennessee

A winter storm has wreaked havoc in the US. Over 150,000 homes have been reeling without power due to the storm. It was followed by freezing temperatures creating icy conditions.

More than 100,000 homes got power back on Saturday after outages on Friday. Some states are still experiencing service interruptions.

Most of the outages occurred in Tennessee. Over 93,000 homes were experiencing power failure, as per PowerOutage.us.

Around 95% customers should have power restored by Thursday next week, said Memphis Light, Gas and Water, which is a major utility company in Tennessee.

Here’s a look at the icy conditions and debris #MLGW crews are dealing with out in the field. This is work that was done in South Memphis yesterday. #ServingYouIsWhatWeDo pic.twitter.com/60kuNtciP6

On Twitter, the company said that crews are working hard despite icy conditions and debris.

Our patrols have been responding to numerous crashes and spin outs caused by the flash freeze conditions. Stay off the roads if possible, and take it slow if not. Here’s an update from the road from Troop H Patrol Supervisor Sgt. Michael Murphy. pic.twitter.com/Z5sMXSXyq2

According to the National Weather Service, the storm spanned 2,000 miles and dumped up to 17-inch snow from Indiana to Vermont on Friday and early Saturday.

States, such as Ohio, Michigan, New Hampshire, Pennsylvania and Maine, witnessed over 10-inch snow. Arctic cold brought freezing temperatures in the Northeast. It caused slippery hazards on the road.

On Saturday, roads remained icy in Texas as water on the roadways froze overnight.