After the Tripoli assault, Libya's next battle could be over banks 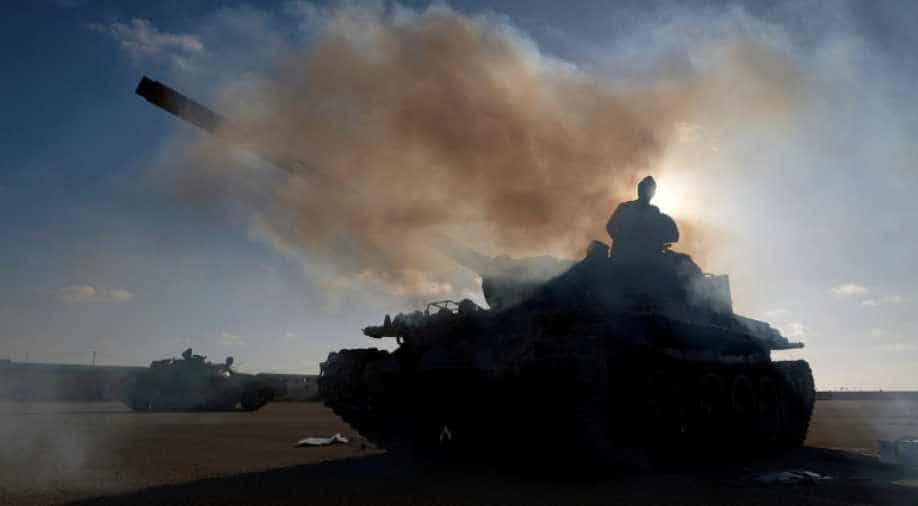 Mobilising Libya`s biggest military campaign since the 2011 overthrow of Muammar Gaddafi, Haftar has advanced on the U.N.-backed administration in the capital from a bastion in the east, where he has a parallel government and central bank branch.

Eastern Libya commander Khalifa Haftar has thrown much of his military forces into attacking Tripoli, but the outcome of the offensive could be determined by a separate battle to keep open the parallel finance system that funds his soldiers.

Mobilising Libya`s biggest military campaign since the 2011 overthrow of Muammar Gaddafi, Haftar has advanced on the U.N.-backed administration in the capital from a bastion in the east, where he has a parallel government and central bank branch.

The general has funded his eastern state with a mix of unofficial bonds, Russia-printed cash and deposits from eastern banks, accumulating debt worth around 35 billion Libyan dinars ($25.18 billion) outside the official banking system.

But diplomats and banking sources say that those sources of support might be closing, as the Tripoli-based central bank, which controls the country`s energy revenues, has taken steps to curtail the operations of banks in the east.

Those banks have in recent months struggled to meet minimum deposit requirements, which could give the Tripoli central bank allied to Tripoli Premier Fayez al-Serraj the excuse to shut off access to hard currency, they said.

"There is a looming banking crisis that could undermine eastern authorities` ability to fund themselves in the near future," said Claudia Gazzini, senior Libya analyst at International Crisis Group.

"The crisis was already in the making before the war broke out."

Haftar has built up his Libyan National Army (LNA) with the help of the United Arab Emirates (UAE) and Egypt supplying heavy gear such helicopters, according to U.N. reports.

But Gulf countries such as the UAE have preferred not to give cash directly to Haftar, fearing it will end up being used for the wrong purposes, several diplomatic sources told Reuters.

That has forced the septuagenarian leader to use merchants to import vehicles and other gear, using hard currency obtained from the Tripoli central bank and paid out by eastern commercial banks issuing letters of credit, military sources said.

There is no public data on the costs of Haftar`s war, but he has sent more than 1,000 troops west plus support staff like drivers or medics, military sources and residents said.

Fuel is not a problem, costing just 0.15 dinars a litre, with state oil firm NOC serving the whole country.

But in its attempt to capture Tripoli the LNA has used hundreds of vehicles, with convoys going west non-stop from Benghazi, carrying anything from soldiers to ammunition to food.

In addition, every day two flights with Russian-made transport planes go from Benghazi to Jufrah in central Libya, his main base. Seriously wounded soldiers are flown to Tunisia.

The offensive has stalled, and so the LNA has vowed to move in yet more troops.

In November, the House of Representatives allied to Haftar approved a law to set up a military investment authority which gives the LNA control (like in Egypt) of parts of the economy including civilian activities such as scrap metal.

The investment vehicle`s companies are exempted from taxes and import duties, as part of a welfare state envisaged by Haftar, but they need banks to deal with partners abroad and expand their businesses, analysts say.

"If the banks fail, Haftar`s welfare state will come under pressure," said a Western diplomat.

The central bank in Tripoli covers some public salaries in eastern Libya but not LNA soldiers hired after 2014 when the country split into western and eastern administrations.

Lenders have still been able to get hard currency via other banks but in a further step the Tripoli central bank might shut access completely, diplomats and business sources said.

The Tripoli central bank (CBL) has vowed to stay neutral and but diplomats say it is also helping Serraj, approving his plans to allocate some 2 billion dinars for his own war effort.

CBL did not respond to mailed questions.

There has been a banking crisis building up all across Libya and especially in the east, where three eastern banks have struggled to keep a required 20 percent of customers` deposits at the Tripoli central bank.

They have been paying out more hard currency in recent months, but need to balance accounts.

"Their deposits with CBL have fallen short of their statutory minimum requirements," Husni Bey, a prominent business leader and owner of HB group.

Data received by Reuters confirmed his.

Diplomats do not expect Tripoli central bank governor Sadiq al-Kabir to shut eastern banks completely as this would pose risks for western lenders.

The same banks operate in the west and east with money flows hard to differentiate.

But they fear the longer the conflict lasts, the harder it will be to unify the central banks and repay debt.

The west has piled up a debt of 68 billion dinars, bringing Libya`s total deficit and public debt to 130 billion, including unpaid state obligations such as social insurance, said Bey.

The biggest worry among diplomats is that Haftar, who surprised world powers with his offensive, might try selling crude from oilfields and ports, bypassing NOC.

"If the offensive fails, Haftar might do this as he feels encouraged by (U.S. President Donald) Trump," said one Western diplomat.

On Friday, the White House said that Trump had told Haftar by phone he recognised his "significant role in fighting terrorism and securing Libya`s oil resources", a comment which has enraged his opponents but fired up LNA supporters.