After France reopens border, truckers scuffle with police in UK over COVID-19 test 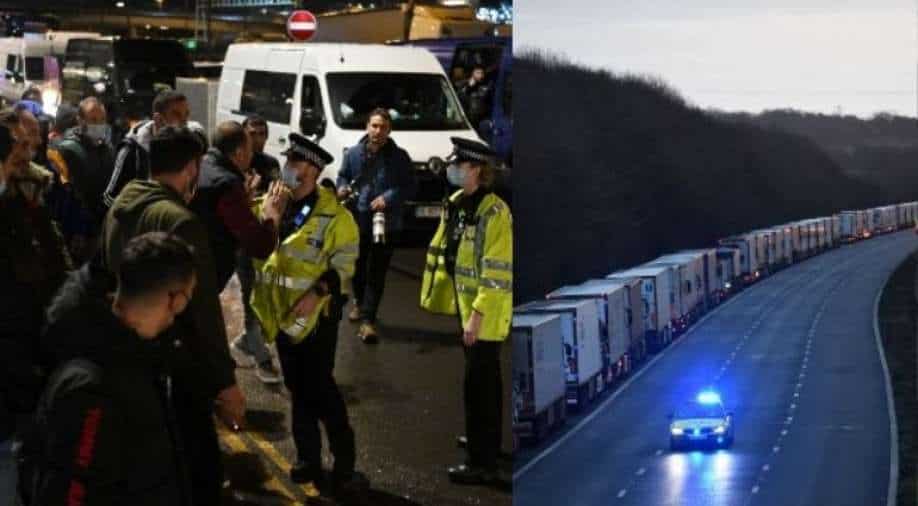 Any driver who tests positive will be given a hotel room to isolate by UK authorities. Several drivers have already complained that they wouldn't be able to meet their families over Christmas as Britain carries out COVID-19 tests.

As France decided to reopen its border with Britain after it was closed following the announcement of a new virus strain by PM Johnson, truck drivers scuffled with police as they were told only those carrying a negative COVID-19 test result could board ferries for Calais.

The British military is set to test the drivers for the virus as the drivers vented their frustration and questioned the decision of police officers present at the border as reports said scuffles broke out with some police officers.

Thousands of trucks were standed at the border as France announced it was closing its land border with the UK after a new virus strain was announced which PM Johnson said was "70 per cent" more transferable.

British officials scampered to speak to French officials as PM Johnson called President Macron in a bid to reopen the gates. The French blockade comes as Britain prepares to leave the EU on December 31 with UK and EU officials still negotiating a deal.

UK's exit from the EU is expected to cause greater disruption as logistics groups have already warned that many European drivers have refused to come to Britain from January 1 since they need to secure a COVID-19 test with anyone who records a positive result would have to take a comprehensive PCR test which takes longer.

UK Transport Secretary Grant Shapps said: "Will see the French border reopen to those travelling for urgent reasons, provided they have a certified negative COVID test," even as French Transport Minister Jean-Baptiste Djebarri added: "French nationals, people living in France and those with a legitimate reason will have to be carrying a negative test."

Any driver who tests positive will be given a hotel room to isolate by UK authorities. Several drivers have already complained that they wouldn't be able to meet their families over Christmas as Britain carries out COVID-19 tests.

Reports say despite the reopening of borders congestion around UK's Dover remains unlikely to recede as British transit hub said it would reopen from midnight local time (2300 GMT) for travellers with a negative coronavirus result.