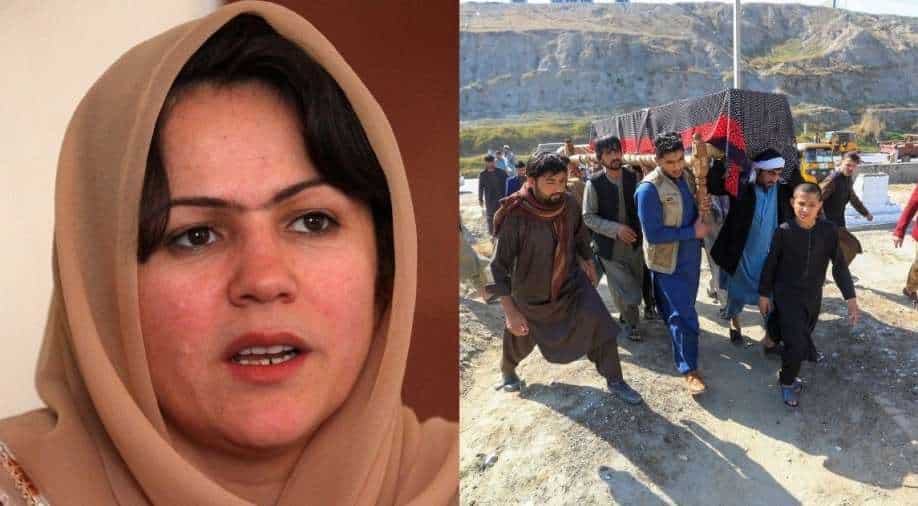 Fawzia Koofi and Afghan men carry the coffin of one of three female media workers who were shot and killed by unknown gunmen, in Jalalabad, Afghanistan Photograph:( Agencies )

The United States and the Taliban reached a peace deal in February, but many Afghan women worry that it does not include adequate safeguards for their rights

Three female media workers were shot and killed in Afghanistan on Wednesday in what appeared to be the latest targeted killing to rock the country.

The murders came as the US special envoy to Afghanistan Zalmay Khalilzad returned to Kabul this week for meetings with Afghan leaders, in a bid to revive a flagging peace process as a deadline for US troop withdrawal draws closer.

The United States and the Taliban reached a peace deal in February, but many Afghan women worry that it does not include adequate safeguards for their rights.

They fear a US troop withdrawal, the winding down of international engagement and the re-emergence of the Taliban in politics could destroy hard-won gains women have made since 200,  from education to freedom of movement.

Lawmaker Fawzia Koofi, a vocal critic of the Taliban, survived an assassination attempt in August, shortly before she flew to Doha to take part in peace talks.

Koofi is one of five women on the 21-member team announced by the government to hold historic talks with the Islamist terrorist group that once banished women from public life. She became the country's first female deputy of the lower house of parliament.

In an exclusive interview with WION's executive editor-in-chief Palki Sharma Upadhyaya, Koofi talks about the latest wave of violence in Afghanistan amid the withdrawal of the US troops from the country.

''Unfortunately, Afghanistan has been in a war for 40 years. Some of us have grown up during the war. Women of the country have been the main victim,'' Koofi said.

''At the end of the day, no one takes responsibility. By silencing women, they think they can get more power,'' she added.

On being questioned regarding the negotiation with the Taliban, Koofi said ''it is an extremely challenging job for any woman as the Taliban does not recognise equal rights for them.''

However, she added that ''We try to demonstrate power and now negotiate real business with them.''

Koofi said that although ''Its a very stressful, difficult task, the aim to end the war keeps me going.''

Women have made huge strides in the conservative country since a ban during Taliban rule of 1996 to 2001 from school, work, politics and going outside without a male relative.

When the Afghan government has announced a new council to safeguard women's rights and interests, amid fears peace talks with the Taliban could lead to the loss of hard-won gains, politician and negotiator Koofi, who has been involved in the peace process, said the council would help drive gender equality.

In her interview with WION, Koofi said ''Issue of women rights was on Taliban's agenda during their negotiation in the peace deal even though their interpretation is very different.''

Koofi added she hopes to preserve the rights of the people.

Even an assassination attempt failed to deter Koofi. She shared her inspiring story during the interview.

Koofi is the 19th out of 23 children in her family. She said during the interview that ''my mother has gone through so much as a woman that didn't want another girl to suffer.''

''Our lives, what we experience is also a product of war,'' she added.

Koofi was left out to die in the sun in one of the attempts to kill her.

On being questioned about her inspiration to join politics, Koofi said that it is in her blood since she comes from a political background.

''I come from a political family. My father was a member of parliament, he was killed.''

Koofi experienced injustice and discrimination as a woman when Taliban was in power. This gave her the motivation and determination to change things.

''We have laws to protect women now. There are more women in the peace negotiation and are now unavoidable.''

Koofi said that she gets a chance she will definitely run for the presidency in Afghanistan.

Talking about the meaning of International Women's Day for Afghan women, Koofi said that ''Afghan women have demonstrated resilience, strength and never give up attitude but there are still a lot of women’s issues which are off the radar.