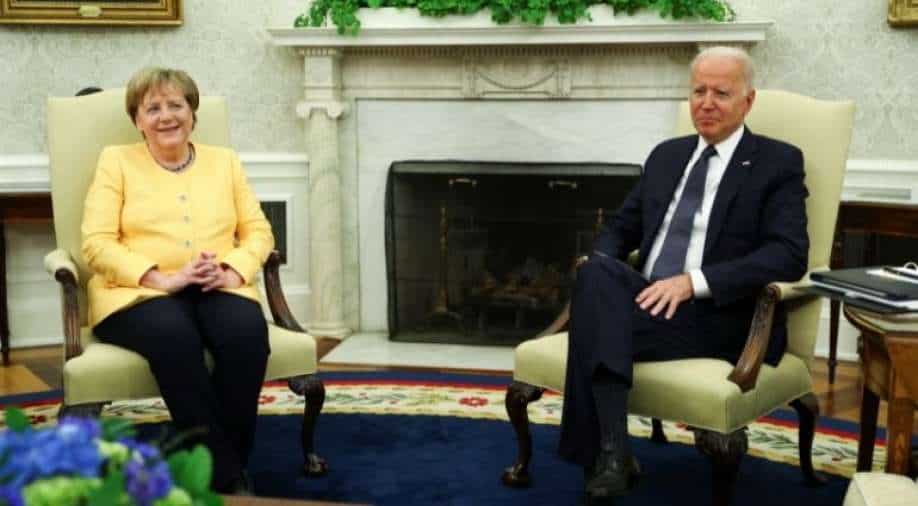 While there were no apparent breakthroughs, the visit was a way to show a unified front after President Donald Trump’s hostile exchanges with Merkel over NATO contributions, trade and multilateralism badly frayed relations

Signaling that the U.S.-European alliance remained strong after the tension of the Trump era, President Joe Biden and Chancellor Angela Merkel of Germany on Thursday stressed their shared values, even as both acknowledged differences on a major Russian pipeline and how best to approach China.

During meetings at the White House, Biden’s agenda included several of his most pressing geopolitical priorities, such as restraining Chinese influence, curbing Russian aggression and waiving intellectual property restrictions on coronavirus vaccine manufacturers.

While there were no apparent breakthroughs, the visit was a way to show a unified front after President Donald Trump’s hostile exchanges with Merkel over NATO contributions, trade and multilateralism badly frayed relations. The meeting also comes before the chancellor’s term ends and a new German government will be sworn in after elections on Sept. 26.

“Good friends can disagree,” said Biden, who appeared alongside Merkel at a news conference in the East Room after the meeting.

For the most part, the trip appeared to be a triumph of the personal over policy. Biden joked that Merkel, who has worked with four U.S. presidents, “knows the Oval Office as well as I do.” The chancellor referred to the president as “dear Joe” several times as she extolled their friendly relationship, which has endured since his time in the Senate.

But the warmth could not cloak the fact that neither leader had shifted from their most substantive areas of disagreement.

Biden said he broached the contentious issue of the $11 billion Nord Stream 2 pipeline, a natural gas conduit being built between Germany and Russia that is expected to be completed by the end of the year. The president and his predecessors have assailed the project as little more than a coercive tool against Ukraine and other allies.

“We’ve come to different assessments,” Merkel said of the project.

Biden said the two had agreed that they were “united in our conviction that Russia should not be able to use energy as a weapon.”

The president waived congressional sanctions this year on the Russian company building the pipeline and its German chief executive, effectively conceding that an effort to halt the project was not worth the expected cost to U.S.-German relations.

“There is a lot of common understanding that China in many areas is our competitor,” the chancellor said, careful not to run afoul of Germany’s largest trading partner. She added that “trade with China needs to rest on the assumption that we have a level playing field.”

The two leaders also signaled that they remained apart on their approach to containing the pandemic. Merkel did not commit to the lifting of patents for coronavirus vaccines, and Biden did not raise the issue in front of reporters. Merkel said she had asked the president if his administration would end a travel ban against Europeans, but he did not commit to ending it.

“I did raise the issue,” the chancellor said, “and got the same answer that the president gave you: The COVID team is evaluating the matter.”

Still, the leaders repeatedly emphasized their one-on-one relationship in their public appearances, a sharp divergence from Merkel’s chilly and stilted interactions with Trump, who maligned her as “captive to Russia.” When asked to compare Biden’s leadership style with his predecessor’s, the chancellor was characteristically restrained, emphasizing that she and Biden had a “very friendly exchange.”

“We are not only partners and allies,” Merkel said, “but we are very close friends.”

The president began the event by offering his condolences to Germans for the loss of life and property caused by recent floods. He went on to thank the chancellor for “an exemplary life of groundbreaking service to Germany.”

Biden was asked to confront cases of diplomatic turmoil closer to home, including protests in Cuba and unrest after the assassination of President Jovenel Moïse of Haiti. He told a reporter that beyond dispatching Marines to guard the U.S. Embassy there, he was not considering sending U.S. troops.

Addressing a wave of demonstrations across Cuba, Biden accused its government of being a “failed state” that was “repressing their citizens” and said he would not end rules against payments Americans can make to their Cuban relatives because he could not be sure that the government would not take them.

“I would not do that now,” he said, “because the fact is, it is highly likely that the regime would confiscate those remittances, or big chunks.”

The president grew testy when he was asked about his top domestic economic priorities. When asked if he was confident that a $3.5 trillion budget framework drawn up by Democrats would be enough to pass with every Democratic senator on board, Biden chastised the news media as preemptively suggesting that the plan, along with negotiations over an infrastructure deal, was headed for failure.

“I am supremely confident that everything is going to work out perfectly,” he said dryly. “I have watched and listened to the press declare my initiative dead at least 10 times so far. I don’t think it is dead. I think it is still alive.”

Aside from more thorny policy issues, Merkel’s visit was a diplomatic victory lap of sorts before her term expires. She started her day with a cheese soufflé breakfast with Vice President Kamala Harris.

Later in the day, the chancellor received an honorary doctorate from Johns Hopkins University, adding to her collection of degrees from Harvard and Stanford. Once she arrived at the White House, Merkel and the president exchanged compliments in the Oval Office.

Though the exchange was not overly warm, it was leagues more collegial than Merkel’s past meetings in the Oval Office. When she asked Trump in 2017, “Do you want to have a handshake?” Trump apparently did not.

Just as Merkel spent years responding mildly to Trump, she has not always been overeager to accept Biden’s entreaties that the U.S.-German relationship had been restored to a sense of normalcy. During the virtual Munich Security Conference held this year, she said of the U.S. relationship that “our interests will not always converge.”

By the time of the news conference on Thursday, Biden and Merkel seemed more interested in continuing her farewell party than discussing what divided them.

After the news conference, they attended dinner with longtime allies, including Hillary Clinton. Rep. Kevin McCarthy of California, the House minority leader, was also scheduled to attend after a trip earlier in the day to see Trump at his golf club in New Jersey.

After the two leaders fielded questions, Biden steered Merkel away from reporters.

“If we don’t leave right now,” he told her, “we are going to miss dinner.”