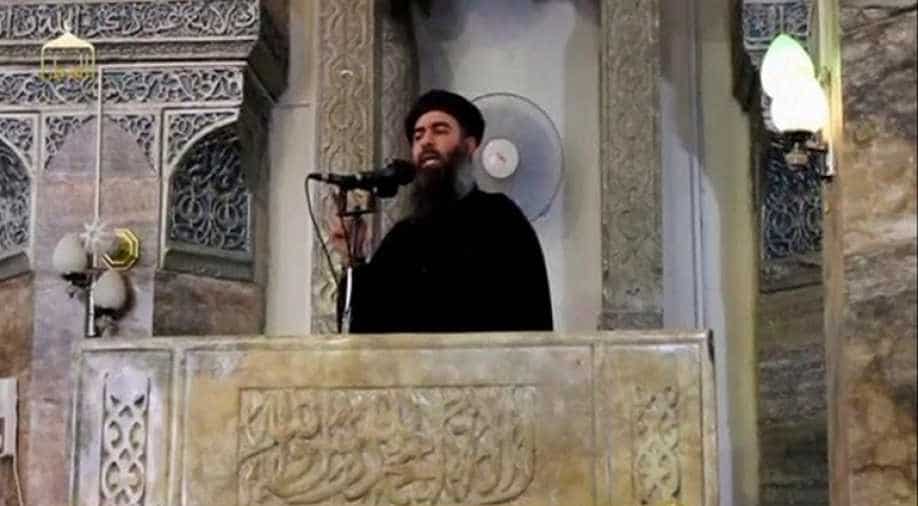 Syrian army including the coalition forces in Iraq have been on the lookout for Baghdadi ever since they started the assault on IS forces. Photograph:( Reuters )

Reclusive even when IS was at the peak of its power, the 47-year-old Iraqi, was rumoured to have been wounded or killed several times.

Islamic State group chief Abu Bakr al-Baghdadi, who purportedly appeared for the first time in five years in an Islamic State propaganda video released on Monday, remains the world's most wanted man, despite the jihadists' "caliphate" imploding weeks ago.

After declaring himself caliph in 2014, Baghdadi held sway over seven million people across swathes of Syria and Iraq, where IS implemented its brutal version of Islamic law.

But that land has been whittled down to disjointed sleeper cells by years of fighting, including a ferocious bombing campaign by a US-led coalition.

It is unclear when the footage was filmed, but the man said to be Baghdadi referred to last week's deadly attack in Sri Lanka and to the months-long fight for IS's final bastion Baghouz, which ended in late March.

"The battle for Baghouz is over," he said, sitting cross-legged on a cushion and addressing three men whose faces have been blurred.

"God ordered us to wage 'jihad.' He did not order us to win," he said.

Reclusive even when IS was at the peak of its power, the 47-year-old Iraqi, who suffers from diabetes, was rumoured to have been wounded or killed several times.

His whereabouts have never been confirmed.

"He only has three companions: His older brother Jumaa, his driver and bodyguard Abdullatif al-Jubury, whom he has known since childhood, and his courier Saud al-Kurdi," said Hisham al-Hashemi, an Iraqi specialist on IS.

Hashemi said the quartet is likely laying low somewhere in Syria's vast Badia desert, which stretches from the eastern border with Iraq to the sweeping province of Homs.

That is where his son Hudhayfa al-Badri was reportedly killed in July by three Russian guided missiles, Hashemi added.

Nicknamed "The Ghost", he had made no public appearances since he delivered a sermon at Mosul's famed Al-Nuri mosque in 2014, when he declared himself "caliph".

His last voice recording to his supporters was released in August, eight months after Iraq announced it had defeated IS and as US-backed forces closed in next door in Syria.

But even as the Kurdish-led Syrian Democratic Forces pressed the "final battle" against IS's last sliver of territory earlier this year, a spokesman for the US-backed group said the elusive leader was likely not there.

"We do not think he is in Syria," Mustefa Bali told AFP as the fall of Baghouz neared, without elaborating.

Some of those who fled the final holdout in the dying days of the caliphate claimed they had been ordered to leave by Baghdadi.

"Had the caliph not ordered it, we would not have left," one woman told AFP in late February, referring to Baghdadi, who was not believed to have been in Baghouz as the "caliphate" crumbled.

His high school results were not good enough for law school and his poor eyesight prevented him from joining the army, so he moved to the Baghdad district of Tobchi to study Islam.

"He had a vision, early on, of where he wanted to go and what kind of organisation he wanted to create," said Sofia Amara, author of a 2017 documentary that unveiled exclusive documents on Baghdadi.

After US-led forces invaded Iraq in 2003, he founded his own insurgent organisation but it never carried out major attacks.

When he was arrested and held in a US detention facility in southern Iraq in February 2004, he was still very much a second- or third-tier jihadist.

But it was Camp Bucca -- later dubbed "the University of Jihad" -- where Baghdadi came of age as a jihadist.

"People there realised that this nobody, this shy guy was an astute strategist," Amara said.

He was released at the end of 2004 for lack of evidence. Iraqi security services arrested him twice subsequently, in 2007 and 2012, but let him go because they did not know who he was.

In 2005, the father of five pledged allegiance to Abu Musab al-Zarqawi, the brutal leader of Iraq's Al-Qaida franchise.

Zarqawi was killed by an American drone strike in 2006, and after his successor was also eliminated, Baghdadi took the helm in 2010.

He revived the Islamic State of Iraq (ISI), expanded into Syria in 2013 and declared independence from Al-Qaida.

In the following years, Baghdadi's Islamic State group captured swathes of territory, set up a brutal system of government, and inspired thousands to join the "caliphate" from abroad.

Baghdadi was raised in a family divided between a religious clan and officers loyal to Saddam's secular Baath party.

Years later, his jihadist group incorporated ex-Baathists, capitalising on the bitterness many officers felt after the American move to dissolve the Iraqi army in 2003.

That gave his leadership the military legitimacy he had lacked and formed a solid backbone of what was to become IS, combining extreme religious propaganda with ferocious guerrilla efficiency.

Uncharismatic and an average orator, Baghdadi was described by his repudiated ex-wife Saja al-Dulaimi, who now lives in Lebanon, as a "normal family man" who was good with children.

He is thought to have had three wives in total; Iraqi Asma al-Kubaysi, Syrian Isra al-Qaysi and another spouse, more recently, from the Gulf.

He has been accused of repeatedly raping girls and women he kept as "sex slaves", including a pre-teen Yazidi girl and US aid worker Kayla Mueller, who was subsequently killed.