A stranded interpreter, and the soldiers who would not let go 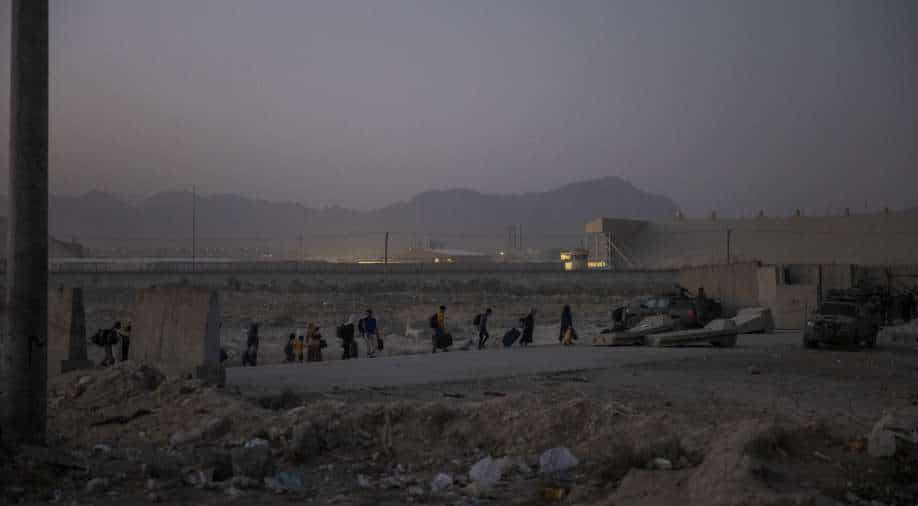 Families arrive at the airport at dawn in Kabul, Afghanistan. Many Afghans who helped the US forces in Afghanistan are now in danger Photograph:( The New York Times )

In interviews from his bunkers in Kabul as events unfolded over the past week, Mikey talked about the ordeal of trying to keep himself alive and his family safe in the chaos left behind by the US exit from Afghanistan. With no word from the US government about when or how he might get out, he realized that the bonds he had forged with US soldiers might offer his only hope for safe passage

The Americans called him “Mikey,” and as an interpreter for the Special Forces he did not just bridge language gaps. He did everything from easing negotiations with local Afghans loyal to the Taliban to warning a convoy away from an ambush.

“Mikey wasn’t just a regular interpreter,” recalls Sgt. 1st Class Joseph Torres, a Texan who served in the Special Forces. “He was our lifeline. He went everywhere we went on the most remote and dangerous missions. It was because of him that we returned home alive after deployments.”

But the day after Kabul fell to the Taliban, the 34-year-old Afghan was on his own.

Determined to get out of Afghanistan, he was making a desperate run to the airport with his wife and two young sons when they were caught in gunfire amid the crush of people who had gathered there to escape. His wife and one son, 6, were both shot in the foot.

As he carried the bloodied and screaming child in search of a hospital, Mikey says, he flashed back to his time on the battlefield with US forces.

“I kept thinking, after everything I did for the Americans,” he said. “After all my hard work and risking my life, now this is what happens to my family? They are leaving us to die here.”

Mikey — who is being identified by his American nickname for safety reasons — is one of tens of thousands of Afghans who worked for the United States and have applications pending for expedited visas allowing them to resettle in America. President Joe Biden has pledged that Afghan allies will be welcomed to “their new homes” and called the situation on the ground “heartbreaking.”

But the evacuation of US citizens and green-card holders remains the immediate priority of the military operation underway at the Kabul airport. That means that for many Afghans who worked with the United States, there is little to do but wait — and try to keep out of the sights of the Taliban.

Mikey worked as an interpreter for the Special Forces from 2009 to 2012 in Kandahar, and from 2015 to 2017 in Kabul. He was once so badly wounded in an explosion that he had to be airlifted to a field hospital.

The night his wife and son were shot, Mikey got them into a hospital and then went into hiding. Preferring rooms without windows, he switched locations four times in one week.

And he was waiting for the Taliban to find him.

In interviews from his bunkers in Kabul as events unfolded over the past week, Mikey talked about the ordeal of trying to keep himself alive and his family safe in the chaos left behind by the U.S. exit from Afghanistan. With no word from the US government about when or how he might get out, he realized that the bonds he had forged with U.S. soldiers might offer his only hope for safe passage.

That is where Torres, who now lives in Pecos, Texas, came in.

He had worked with Mikey on multiple deployments, and now he had a new battle: leading a global operation to get him out.

To coordinate those efforts, Torres and a group of about 20 former and current members of the military formed a WhatsApp chat group and an email thread. They reached out to military and Department of State contacts, along with members of Congress, to try to get Mikey and his family onto a military evacuation plane.

They say they understand why US citizens are getting priority when it comes to evacuations. The outrage is over the lack of a clear plan for all those Afghans who worked side by side with the Americans, who may have targets on their backs now that the Taliban is in control.

“It’s infuriating,” Torres said. “My heart breaks for everyone who doesn’t have the support Mikey has.”

It was not the case that Mikey tried to get out of Afghanistan only when the danger became clear.

He started his special visa application in 2012, when he was in Kandahar with the military. He had his interview, one of the final steps in the process, in November 2018 when he worked at Camp Duskin in Kabul. He is still waiting for medical tests and approval. Emails he has sent to follow up on his application have gone unanswered.

Across the US, members of the armed forces are leading their own campaigns to pressure the Biden administration to scale up the evacuation of Afghans who worked as their interpreters. They have taken to social media and created fundraising campaigns such as “Help Our Interpreters.”

Military interpreters are among the most vulnerable of Afghan allies. The nature of their work required that they accompany military personnel in the battlefield and be present during interactions with locals. If residents of the areas where they worked were hostile to Americans, the interpreters could be easily identified for the Taliban.

Mikey was a teenager in Kabul when the US invaded Afghanistan in 2001. In high school he worked hard to learn English, and his language teacher suggested he work as an interpreter for the Americans after graduation.

He was dispatched to Kandahar airfield, one of the largest US military bases in Afghanistan, and from there to multiple remote outposts, quickly working his way up to become a lead interpreter.

“Mikey was always fun to be around, very open-minded with a very big heart,” said Sgt. First Class Raymond Steele, an active member of Special Forces who has stayed in regular contact with him over the years.

Mikey listened to communications to intercept threats, talking to local tribal leaders in person and on his phone. On one patrol, he got word of an ambush and of insurgents burying explosive devices in their path.

“I felt proud of my job because it felt like I was helping my country,” Mikey said.

Between stints in Kandahar and Kabul, Mikey got married. He bought a car and worked as a taxi driver in Kabul. He and his wife had children.

But the US era in Afghanistan was ending — and the Taliban’s resuming. That left countless Afghans feeling helpless and adrift, as Mikey was when we spoke by phone last Saturday night.

“We are in the dark,” he told me. “My American friends say just wait, wait to see what happens. Be ready to leave when we tell you.”

Then Monday around 4 p.m. Mikey received an astonishing text from Torres: We are going to get you out, it said. Get ready now. Wait for instructions.

The mission to rescue Mikey, with the help of current and former military contacts on the ground, was in motion — and things were moving quickly. In a space of two hours, Mikey and his family were hidden in a car, their documents stashed, heading for a gate at the Kabul airport where members of the military were expecting him.

They welcomed him, taking his family to a clinic so his wife and son’s bullet wounds could be treated. The children got candy.

When Torres got the call that Mikey was finally in the clear, he broke into sobs. He never cries, he says. Steele called Mikey and shouted, “I love you, man.”

On Tuesday, Mikey and his family flew out of Afghanistan aboard a US military plane, his initial destination withheld for security reasons.

It was his son’s sixth birthday.

“I am extremely relieved and happy,” Mikey said during a call from the tarmac in Kabul as he waited to board the plane. “My infinite gratitude for the help and kindness of my American brothers. You gave us a second chance at life.”